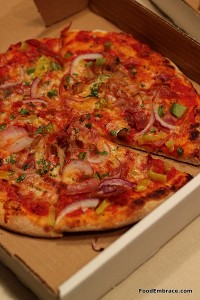 Last Friday, as I was heating up some leftover pizza, I noticed some sizzling and then a bright spot in my oven.

I opened the door to find smoke and a small fire taking place in the left front corner.  Crap!  I gave it a sec to see if it would burn out (In case it was food related) but it kept getting worse so I shut the oven off and pulled out the pizza (Save the food!).

After the heating coil cooled for a bit I realized what had happened and not only was I flummoxed but also annoyed.  It seems that the coating on the heating coil decided to just melt off leaving a section of the coil exposed. The exposed coil reacted with the remaining coating causing it to spark and then catch fire.

So my oven is out of commission.  Thankfully I have a double oven, the bottom half being a smaller oven drawer.  It’s not large enough to roast a chicken or anything, but I can roast veggies in it just fine. Or, you know, heat up pizza.

That’s a lot of backstory to say, we got pizza out this week!

Scott ordered a new coil that should be delivered next week.  In the mean time we took this as an opportunity to visit one of our favorite pizza spots in Columbus, Figlio!

Yes I do love me some Bono, but it’s not close enough for a quick pizza run.  Figlio is and they make the perfect personal size pizzas. 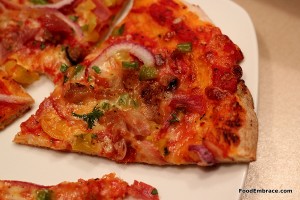 We got the Figlio classic which has sausage, pepperoni, and proscuitto plus veggies. Scott got the same only his also had mushrooms on it.

We munched on our pizza as we watched the 2012 NHL All Star Draft and kicked back after a busy week. Did anyone watch?

This weekend we’re looking at more home improvements, this time it’s all painting.  We are wallpaper free! Hooray!

What are you doing this weekend?

One thought on “Burnt Out”