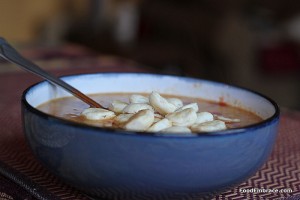 Scott and I were out to dinner recently and he ordered some corn and jalapeno soup as a starter.  The soup flavor was great, there was bacon in it providing a smokey background and the corn stood out.  As I always do, I started trying to figure out how I could make this at home.

I had some crab that needed to be used and it occured to me that I could make a sort of crab and corn chowder.  I pondered over this for a few days until I had a set idea in mind.  Then I put it into motion and came up with a chowder that just might be one of my favorites.

In a large soup pot, add in a little bit of olive oil, about 1/2 TBSP and heat over medium heat.  Add in the bacon and cook for about 2 minutes.  Let it start to crisp up.  If the bacon produced a lot of fat in the pan, you can discard some of it.  Completely up to you!  Next add in the onions, peppers, carrots, and celery.  Stir and season with seasonings.  Sautee for about 5 minutes until the veggies start to soften and break down.

Add in the chicken stock and the corn.  Also add in the cobs.  Bring up to a simmer and cover. Allow to simmer for about 30-45 minutes.  Remove cobs from the soup. With an immersion blender, blend up the soup unti everything is broken down and it starts to thicken up just a bit.

Stir and add in the crab and the shrimp.  Bring back up to a simmer and simmer for about 5-7 minutes until the crab and shrimp are heated through.  Add in a few dashes of hot sauce, to your taste.

Remove from heat and serve immediately. 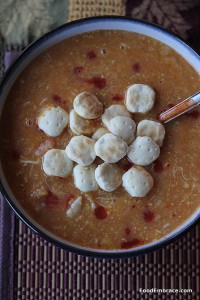 Keep the hot sauce handy because you’ll want to add in some more at the table! Along with some oyster crackers of course!

This soup completely blew my mind.  By keeping the cobs in while it simmers that helps to really bring forth the corn flavor and sweetness.

The bacon isn’t overpowering, it provides just enough smokey goodness to the background.

The crab and shrimp are also a bit sweet which really pairs well with the corn.  However by adding in that extra hot sauce, the sweetness isn’t overpowering.  The hot sauce also provides a nice heat that builds up the more you eat.

This isn’t a super thick chowder, it’s right between chowder and soup.  Creamy texture but not a real heavy chowder consistency.

This makes enough for four big servings.  If you’ve got leftovers, you’ll want to eat them the next day.  Seafood doesn’t keep very long in the fridge. And just like with most soups, this one is even better the next day! 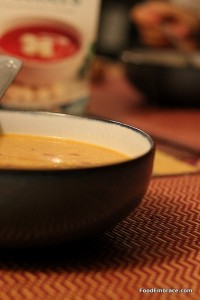 What’s your favorite kind of chowder?