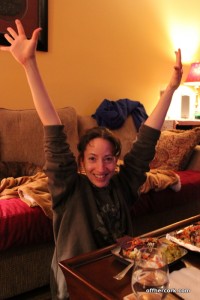 Last Monday I dragged my feet to PT. Because of my hip struggles, I’ve been going to PT since July.

I was tired of PT.

I was going to walk in and discuss my release because I was pretty much over it.  I didn’t even get that far because the therapist said, “At this point, I’m pretty sure we can cut you loose.  You can start increasing the miles on you’re own.”

My appointment was all of five minutes long and I was out the door.  The receptionist checking me out started singing to me.

I am up to 3 miles now and about to bump that up a little more.  I got several runs in last week at 3 miles and they were great.  My endurance is starting to come back which makes me so thankful!

When you’re a distance runner (I consider people who like to run more than 6 miles in one shot, a distance runner. This is MY interuptation. Yours may vary.), running low mileage and struggling with it is very off putting.

In your head you know it’s not going to last but going through it can be a little rough and mentally challenging.

But right now, I’m flying high because who’s got two thumbs and doesn’t have to go back to PT?