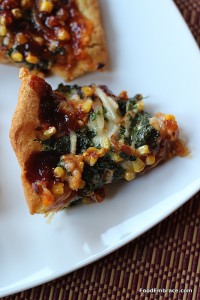 Last week for Pizza Thursday I went all out and created something completely new.

The results were interesting and a little surprising.

I had some greens that needed used up and everything just snowballed from there.

I decided I was going to create deep dish style pizzas using a cornmeal crust.

The cheese and toppings would all be the same with the addition of local bacon to the BBQ one. 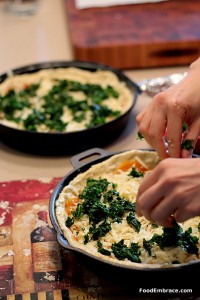 I got out my cast iron skillets (Note to Scott: We need more cast iron.) and greased those with a bit of butter.

I used my basic pizza dough recipe as a guide to create the cornmeal crust. The changes were:

Everything else, yeast amount and water was the same.  I did notice that this crust needed a little more AP flour, about 1/4C more to make it easier to handle.

I’m not sure if this is a result of me adding in too much water or due to using cornmeal.  Clearly more testing needs to happen.

I let the dough rise and do it’s thing during the afternoon.  This dough wasn’t quite dense enough to roll out and cook on a pizza stone.  However it was perfect for the cast iron method!

I just split the dough in half and worked it until it filled up the cast iron skillets.  Much like how you would work a dough to line a pie pan.

For the Butternut Puree: I boiled up some chopped BNut squash and mashed that with just a small amount of butter and unsweetened coconut milk.  Since I was using this as  “sauce”, I wanted it thicker so I skimped as much as possible on the butter and coconut milk.  It was more for a touch of flavor over getting a creamy consistency. I added in a small pinch of garlic powder and smoked paprika as well.  I probably used about 2C of chopped BNut.  I had a very large BNut that needed attention and didn’t use anywhere near all of it for this pizza.

For the BBQ Sauce: I mixed in about 1/2 a can of tomato paste with about a 1/4C of my favorite BBQ sauce.  If you’ve got homemade, certainly use that! 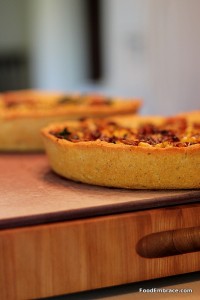 With a drizzle of BBQ sauce over the top of each pie.

I baked these pies (both skillets fit in my oven) at 425 for about 1/2 an hour.  Because the skillets were greased with some butter they were pretty easy to get out of the pans. It still took two of us to get them out though! Scott held the pan while I handled the pies.

I wanted them out to be able to get some shots of the crust, next time I’ll just leave them in the skillet. 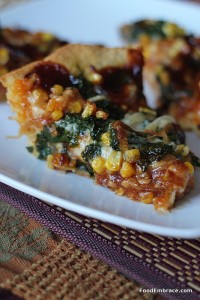 These pizzas were probably the most unique that I’ve made so far and I would defiitely make this method again.

The kale worked great as a topping and so did the sweet corn.  The corn kind of caramelized a bit during baking and become sweet little chewy nuggets.  A completely different taste experience that way.

I used a little too much BNut squash and would take that down to a thinner layer next time.  It became a little too heavy while eating because it was so dense.

The BBQ sauce on top was okay but I might leave that off next time.

I like the deep dish style so I was happy with this crust.  If I wanted to use it on a pizza stone, I would reduce the amount of cornmeal and use more AP flour to give it a little more gluten action making it easier to roll.

The pizza was certainly different and a nice change of pace from the standard style pies.  I’m anxious to play with the cornmeal a little more and see what else I can come up with.

Have you ever had a cornmeal crust pizza before?