I wasn’t going to talk about this.  Everyone is doing it and sharing their stories.  I was going to quietly go about my business and be sad in my own little world for a bit.

I’m not very good at that though.  I tend to say what I’m thinking and I usually don’t sugar coat things either.

And this is why I decided to post about the very sad passing of Steve Jobs.

I’m a bit older than a lot of people on the internet it seems.  I didn’t grow up with a computer.  It was the 80s and computers were still brand spanking new and super crazy expensive.  We were on a very tight budget and cable was considered a luxury.

Going to college was when I got a chance to own my first computer.  It was an Apple and my parents, my dad especially, wanted to send me off to school prepared.  That computer cost $2,500.00 that my parents put on a credit card which at the time was a huge deal.

Even in the 90s not many people had computers at school.  Everything was still new and the internet especially was brand new.  I was one of two people to have a computer on my dorm room floor.  Everyone else had electric typewriters or word processors.

I loved that computer and have been in love with Apple ever since.  Yes sometimes the OS drives me a little crazy but the reality is the machines work.  And they look damn nice.

That’s just a little back story, mostly for my benefit because I won’t ever forget my first computer.  Or how when Scott and I first met and he told me he was studying to be a computer engineer, I informed him he must not be a very good one if he didn’t know a thing about Apples. “PCs aren’t the only computers that exist you know. The fact your school only teaches you about one type of computer is a little ridiculous.”

I told you, I’ll say whatever it is I’m thinking and I don’t sugar coat anything.

No wonder he fell in love.

The reason that I’m posting about Steve Jobs today is because he understood people like me.  And people like my husband.  He got it and damn, it’s so refreshing when someone gets it. When you don’t have to explain or feel like part of you has to be tucked away because people are going to think you’re weird. 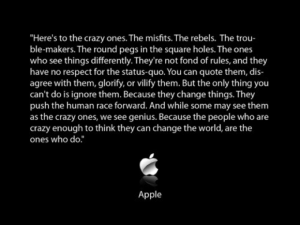 I highly recommend that you click on this image so that you can read the quote.  It’s a keeper.

Here is a You Tube clip of it as well, Steve Jobs, The Crazy Ones.

4 thoughts on “A Toast To Steve Jobs”