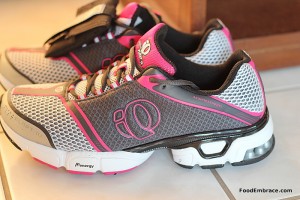 This was an odd week for running.  The first half of the week was really windy and while I know that some folks don’t mind running in that, I’m not one of them.  I hate running in wind.  It makes my nose run and my ears hurt, and it’s just not fun.

That was two days without running.

One of those days I did do a workout DVD, a quick Jillian workout and whew I was sore the next day.  I am out of shape!

The following day it rained all day long.  It wasn’t until Thursday that I got in my first run of the week.

I did a 2.5 mile run, my longest yet during this whole hip injury thingie.  The run went well.  I have no idea what my pace was because my HR monitor seemed to be out of whack.

My hip was amazingly sore that day.  It hurt to walk and go up and down stairs.  It hasn’t bothered me that much in a very long time.  It felt different than the pain before.  This felt like it was in my bones as opposed to just being a sore muscle.  It felt structural as opposed to muscle soreness. So strange!

It lessened by the end of the day and by bedtime it was completely gone.

It didn’t make any sense. I only up my mileage by .5 miles, so why in the world would my hip bug me that much?  UGH!

I probably shouldn’t have but I ran the next day as well.  My hip was tight during the run but not sore and it was only slightly tight after the run.  It wasn’t sore.

Break on Saturday and then a run on Sunday.

I’m was in the middle of doing my 2.5 loop this morning when I almost stopped dead in my tracks because I realized what happened on Thursday.

I didn’t run 2.5 miles that day.  I ran 3.5!  I wasn’t thinking and just did an extra loop because I was zoned out and running along.

Holy crap no wonder my hip hurt me so much on Thursday! And no wonder it took me 35 minutes!

Well now that brings up some interesting things.

I’m not quite ready for that kind of mileage just yet, which was made apparent by how much my hip hurt.  I’m still running so that’s a positive thing.  However it’s clear now that this is going to take me some serious time to get past.

I don’t know what happened to my hip but it is a more intense of an injury than I originally thought.  It’s going to be a slow recovery process but as long as I can run, then I’m okay with that.