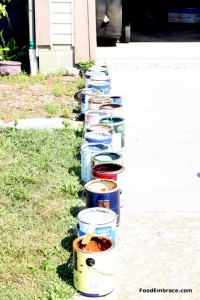 First let me apologize for the photos in this post. I’m still learning my way around my camera, figuring out all it’s ins and outs. I took these photos on a super sunny and super bright day, so they came out a little more washed out than I wanted.

The first area we tackled for Operation Clean-Up was our basement.  The first thing I said was, “We can get rid of all that paint down there!”

Add in a few expletives to that sentence and it will be a lot more accurate.

Here’s the thing, the people that lived in this house moved out and left a bunch of crap in our basement.

Boxes, packing popcorn, bubble wrap, lots of styrofoam, and did I mention boxes?  I don’t mean a few, I mean almost an entire section of the basement was filled with this stuff.  We’ve been slowly getting rid of it for 5 years.

That’s how much stuff was here.

Not only that, but they also left an entire section of the basement filled with paint cans.  Not a little bit of paint either, they left 17 cans of paint plus two little quart cans.

I lived with it for 5 years and finally said, it needed to go.  A couple weekends ago it was my mission to dry out all the paint cans so that I could toss them.

Getting Rid of Old Latex and Acrylic Paint:

In Ohio (and most likely the other states as well), if you have latex and/or acrylic paint, the trash men will take it as long as the cans are open and the paint is dried out.  To help the paint dry up faster you can add shredded newspaper or kitty litter to it.

Once the paint is dry, leave the lids off the cans and you can put them along with the paint cans in a trash bag to be disposed of.

It took both of us to open some of these paint cans.  They were rusted and sealed shut.  Two people, two screwdrivers, a paint can opener, and one hammer got the job done.

To say it was a pain in the ass is an understatment.

Some of the paint cans were almost full of paint while others only had a little bit left.  I filled them with shredded paper and stuck them out in the sun to dry.

I placed them in the sun for three days and they were not drying up. 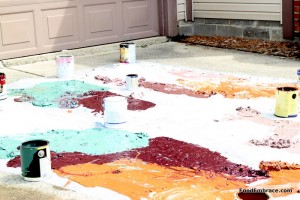 As a last ditch effort to be rid of this paint once and for all, I lined my driveway with some plastic sheeting and dumped the paint all over it.

We got the sheeting from a home improvement store ages ago to use as a cover or drop cloth when needed.

It came in really handy to help the paint dry.  I dumped the paint all over the plastic and smeared it around to make a very thin layer.  It sat out in the sun for hours and dried up beautifully.

I rolled up the plastic, placed it in a trash bag and now I’m rid of the 17 cans of paint the previous owners left.

Of course I still have about 8 cans of stain, oil based paint, and polyurethane that I have to take to the proper facility so it can be disposed of.  *sigh*  But the other cans of paint are long gone!

Have you ever had to get rid of old paint before? Ever move in someplace where the previous owners left you some “surprises”?