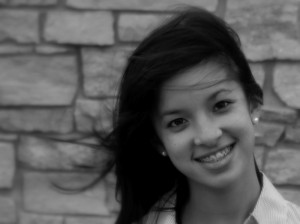 This is the first post in the ongoing Food Can Heal series. In this series, folks talk about how they turned to food to help their bodies heal and recover from illnesses and aliments.

Today’s story comes from Olivia who discovered she needed to go Gluten Free. Instead of looking at food as an enemy, she embraced it and accepted it.

My story starts just a few years ago; I was eleven at the time and in sixth grade. It was around October and my class was getting ready to go to Outdoor Ed; a weeklong experience in a camp. It was exciting and I was ready to try new things. But just before I was to leave something appeared on the higher side of my thigh, it looked like maybe a mosquito bite with a head on it but I wasn’t really sure so I ignored it and went on. A few days later, we had arrived at the camp and I felt something in that exact area again, but this time it hurt. As you can imagine, there were no showers in this camp and we were constantly walking around, wearing jeans and other types of long pants so the fabric was rubbing up against the ‘mosquito bite’ all the time. I got a band-aid from a friend but it didn’t do much- the pain was excruciating. My fun filled week surrounded by friends and the outdoors, was ruined because of it. I was eager to get home and when my mom picked me up at the end of week I explained to her what was on my leg and she took a look at it when we got home. We both thought it was probably just an ingrown hair or something like that, but little did we know it was the first of many.

I had heard of boils before, I remembered seeing it on a cartoon once; that a character was famous for having one big boil on his face, but sadly the ones that I had were not a funny thing at all. It was probably the worst year of my life. I think back on that year and wonder how I ever made it through. I had a total of twenty boils on my skin, each as painful as the last. Our remedy to help ease the pain was Neosporin and a band-aid. It became a daily habit- one boil here, one boil there, a dot of Neosporin and then a band-aid to cover it. These things were violent and what we called ‘angry’. They were hard and red and hurt like nothing I had ever felt before, they lasted for about a week, maybe just a few days beyond. Honestly the worst part of those boils was the unknown. I had no idea why that was happening to me.

We went to a Integrative Health doctor where we asked for help. I was ashamed to show her my boils- they were embarrassing and the last thing I wanted was to flaunt them around. My energy level was always low and I never wanted to do anything, I would just sit in my room and write on my laptop. I kept a short diary on one document. It was in the winter and school was out for a snow day, I wrote ‘I have two more boils on my legs, I’m really scared something’s wrong with me.’ I was scared and I think part of me was scared not knowing what the ‘what’ was. I probably looked like a pretty clumsy kid, I’d come to school with band-aid’s all over my legs, it was pretty pathetic. I washed with a very, very powerful soap that we thought might get rid of the boils… I was a mess.

We talked with the doctor about everything and then a few weeks later another plague hit my skin. I remember I was sitting on the front porch with my mom and she noticed something on my elbows. They were red and bumpy and very itchy. The look on her face told it all, there was something else wrong. We tried to think of what was wrong, I had been laying on my stomach with my elbows on the comforter and we thought maybe it was just that or we thought maybe the grass I had been in had gave me a reaction. And then something else happened; a rash broke out all over my arms and legs. I was mortified. I looked like I had leprosy or something. We went to a dermatologist and discussed what these rashes were. As I listened to them talking about different diseases, getting a biopsy done on my elbows, I broke down. That was the moment when I realized something was wrong. I looked down at my covered arms and legs and broke into tears, I couldn’t believe this was happening to me.

That’s when the creams came in, three different creams all very thick, very slimy and very powerful. It was nearing the end of school and I thought I would never be able to walk in public again. We would put ‘the little tube’ of cream on the elbows and then the ‘big yellow tube’ of cream all over my arms and legs. I had to put towels down on my bed so the cream didn’t get onto the sheets and I couldn’t rest my arms or legs against any furniture. We had discussed a low carb diet so we tried to do that for a while. I did not want to go on medication at all and neither did my mother want to. I had heard of people going on medication and thought of doing that for the rest of my life sounded awful.

We had discovered the cause of all of my skin issues was gluten intolerance. My antibodies were through the roof and they were detecting gluten as ‘foreign’. The doctor said my body was so busy fighting gluten that it left my thyroid and skin open to attack. Come to find out, I have two autoimmune disorders: Thyroiditis and Celiac Disease.

Gluten Free had been mentioned by the doctors, I had heard about gluten free and I knew it had to be awful. Turns out; it saved my life. We started gluten free, I ate my last sub sandwich that night, my last whole-wheat pasta and the next day, June 1st 2009, I was gluten free. It wasn’t so bad in the beginning and I wasn’t missing ‘regular’ food. And then something amazing happened. The boils were gone. I was in awe. My whole family was in awe. Weeks went by, my skin improving by the minute. I looked like a completely different girl. I think the one thing that pushed me a lot was my sister’s wedding. I was a bride’s maid in the wedding and I did not want to be covered with boils. And I wasn’t, I looked like a normal twelve-year-old girl.

To this day, I have been gluten free for two years. During those two years I really had to grow up, I had to take control of my life and say ‘I want to be better, and I will give it my all.’ That’s what I did, I looked at my skin with those pain-inflicting boils and I decided I wasn’t going to let it harm me anymore.

I do meet people that really need to be gluten free but aren’t and they are still in pain and are still trying other things out. But honestly, if I can do it, anyone else can too. There are tons of websites, books and recipes to help you out. You don’t have to feel bad anymore. Being gluten free has changed my life and it has made me the person I am today. It’s also helped my mom who is now gluten free and my aunt who is gluten free. Both had no idea that they were gluten intolerant, but they tried for only one week and felt so much better! What made my journey bearable was the help from my mom. My mom is amazing. She really is, she was the one who took notes during my doctor’s appointments, and she was the one who put ‘the binder’ together with everything related to my condition over the last two years. She had calendars that we would mark when I had boils, she was the queen of
organization and I owe it all to her.

Thanks for sharing your amazing story Olivia!

Olivia makes some powerful statements in her story of discovering she had Celiacs. What stuck out to me the most was her desire to take back control over her health and her life.  She decided to do the best that she could to get herself healthy again.  And she succeeded!

If you or someone you know has a story they would like to share for this series, please email me at Andrea AT FoodEmbrace DOT com