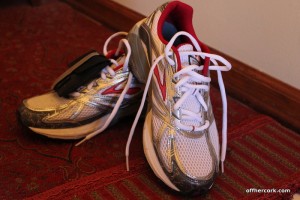 Are you tired of hearing about my hip already? I realize that it’s the main topic of discussion but right now that’s all I’m dealing with. Currently my whole exercising world revolves around my right hip!

I finally got a chance to see the PT last week.  It seems like that was forever ago by this point!

I walked into the session thinking that my TFL muscle was tight and needed released and possibly strengthened. (Because this is what I was told.)  He said that my hip was actually inflamed because the muscle was weak.  I had to walk up and down the hallway several times and he said that my left hip was dipping down when I stood on my right leg.  This is because the right hip muscles are weak and unable to hold my left hip up.

So I have training exercises that I have to do to build up that right hip.  I did them there at the session and I was shaking by the end of it.  They caused my hip to hurt so very much and actually zapped my energy for the rest of the day.

Four exercises that I was told to do everyday and then I was to see him again this coming week.

I have to say that I was initally concerned with these exercises. They hurt my hip and going into the next day my hip still hurt.  I had visions of my hip being sore and tender all week long.  Not fun.

I’m happy to say that this isn’t the case! My hip feels like it might be getting better!

Don’t get me wrong, the exercises still cause my hip to be sore as I’m doing the exercises.  However there’s no lingering pain.  My hip isn’t sore for the rest of the day nor is it sore the next day.

Hooray!  Maybe this means I’ll get to actually run before the summer is over.

Though I have to say, with the horrendous heatwave we’ve been having here lately (heat indexes over 100F), I’m not really missing the running at this point.

The therapist also told me that the shoes I’ve been wearing for three years (same model shoe, not the same exact pair for three years) are actually providing me too much stability.

I currently wear Brooks Adrenalines, which I was fitted for at a running store.  I’ve talked about my shoes and what type they are before.  He explained that over stabilizing can actually lead to hip injuries. Which is interesting because this is my second hip related injury.  The first being with a tight IT band.

He actually provided me with a prescription for a pair of neutral shoes and bonus, it’s also a 10% off coupon!

I’m also excited because there are way more neutral shoe choices than there are stability shoes.  Plus they also look a lot cooler.

How’s your training going? Have you still been running out in this heat?