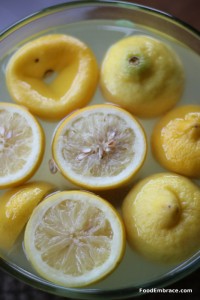 Lemonade was not something that I grew up drinking.  In fact we never had it.  Ever.  The first time I had lemonade was at some point during my teenage years.  My sister and her then boyfriend (now husband), owned a boat and we headed out on the water one day.  She brought food and drinks to go with us and one thing she made was lemonade.

It was the basic instant mix kind but one sip on a very hot Western PA summer day and I was hooked.  It was amazing.

Sweet and slightly tangy, to me it was perfection.

After that point I started making lemonade on my own using the same instant mix.  Then flavors started appearing and raspberry lemonade was about the best thing on earth at that point.

Eventually I realized that instant lemonade is not good for you at all.  Much like instant tea, it’s full of icky things we don’t need.  I stopped making lemonade for years after that.  A few times we’ve purchased lemonade at the store. The kind that’s located next to the OJ in the fridge section.  It was alright but I thought to myself, “It can’t be that hard to make lemonade.  It’s just lemons, water, and sugar.”

And indeed it is just that simple. 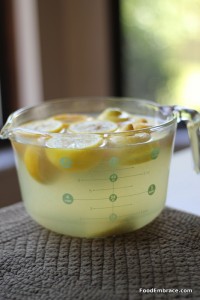 Fill a tea kettle and place it on the stove to boil.  Cut the lemons in half and squeeze the juice into a very large glass pitcher. After squeezing, place the lemon halves in the pitcher as well.  Once the water reaches a boil, pour the boiling water into the glass pitcher with the lemon juice and lemons.

Allow to steep for at least a half an hour.

Stir the lemon water and combine with the sugar.  Top off with more cold water until the container is full.  Stir, taste and see if more sugar needs to be added.

Serve immediately in a glass with ice or place in the fridge to chill.  Drink and enjoy! 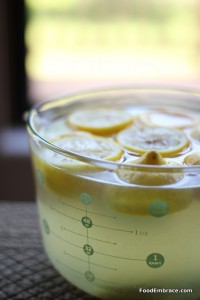 I let the lemons steep in the boiling water because I wanted as much lemon flavor as I could get.  Since the rind has a bunch of flavor and oils, I thought steeping would yield me the most lemon power and I was right!

I’ve also done this with a combo of lemons and limes.  The limes add a lot more tartness and require a little bit more sugar but the taste is refreshing, especially on a hot summer day.

It’s easy and an very inexpensive to make lemonade at home.  You can drink it as is or you can add some seltzer to it for a little fizziness and fun.