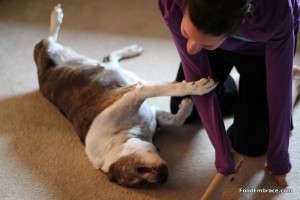 The lack of an exercise post yesterday was because of two reasons.

1. I had an appointment with my sports doc today.

2. I was doggone tired from my weekend.

The news from my sports doc wasn’t horrible but it wasn’t fantastic either.  He did some manipulations and palpated the joint area to see what was going on.  Then he took a look at the Xrays that I brought (borrowing them from my chiro).  He said he saw a very very faint line across my hip joint, the femoral neck area, and that has him wanting to take a closer look.

He also informed me that stress fractures in that area are common in female runners. The hips are areas that we need to take special care of and he wants to make sure diagnosis is spot on before deciding on a course of treatment.

If it’s not a stress fracture, it would be the muscle right over the hip bone being inflamed and in need of some physical therapy work. That muscle is called the rectus femoris and works as the leg moves during running.

I’m trying to stay positive and hope that it’s not a fracture and that the hip muscle is just being a bit cranky.  My MRI will hopefully be scheduled for this week sometime.  I would like it sooner rather than later because I would like to fix this issue or at least get working on a recovery plan.

In the meantime Rocks and I are walking and crosstraining with a paper towel roll.  According to Rocky, a paper towel roll is the best invention ever.  He likes to lay on his back while you bop him with it. Then after a while he just wants to chew it and tear it to pieces.

Rocky doesn’t eat things, so I don’t have to worry about him eating the roll or eating soft toys.  He likes to rip and be destructive. Your typical boy.

I’m staying positive for the moment and hoping it’s not a stress fracture. In the meantime it’s walking and crosstraining for the time being. 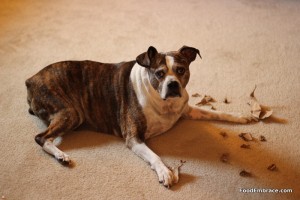