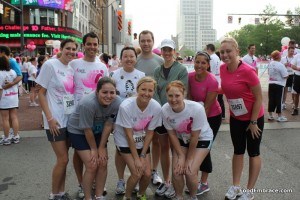 One of the things I did during the blog migration was run a 5K.  My friend Jess contacted me earlier this year asking if I would be interested in running Columbus’s Race for the Cure in May.  She was getting together a group of folks and Team Run, Tweet, Cure was born!  There were 10 of us who met up that morning to get our 5K on.

This was the first time that I’ve ever done this race.  Having been downtown a few times during race day, I knew it was a big deal.  It wasn’t until we walked over there to get ready for the race that I was able to see just what a big deal it was.

Holy crap is basically all I can manage to say.  This race is HUGE.  There’s a small expo that is open to the public that was located on a street adjacent to the start of the race.  We navigated our way through that and managed to find each other again at the start. 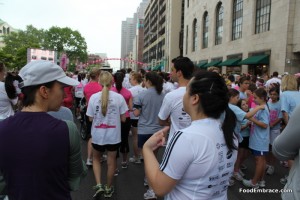 We waited and listened to the speeches and then they started releasing the runners in groups.  There are so many people and it’s so crazy at the start that runners, walkers, and everyone else are all mixed in together.  It’s a little chaotic but with as many people as there are during this race, there is really no way to get around that.

Columbus was in a state of transition at this time, wanting to be spring but still holding onto winter as long as it could.  The morning was cool but I knew once I started running that the weather and myself would warm up considerably. This explains my shorts and hoodie combo.

They said that Columbus’s Race for the Cure is the largest race in the nation.  Is this true?  I don’t know, you can decide for yourself.  Please keep in mind, this is just the runners.  And this isn’t everyone. 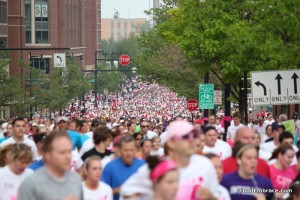 From a running perspective, the runners in the black shirts use of the tagline “Powered By Natural Gas” is probably not the best choice.  Perhaps they should rethink that for next year?

I wasn’t able to see Scott at all until I was in the last stretch of the race.  It’s a 5K and once you hit High Street you are on your way to the finish.  You run down all of High Street and it’s probably the last mile in the race.

All down High Street, local bikers come and line their bikes up to cheer on the runners and walkers.  By bikes I do not mean the two wheeled jobbies with the flower basket and bell. 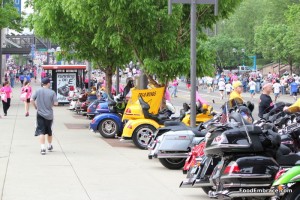 I mean BIKES. They are all lined up cheering everyone on!  It’s quite a sight to see because there are so many people and bikes!  However, the downside, and maybe I’m just being picky, there are so many of them and for a mile as you’re running all you can breathe in is exhaust.  It’s not very pleasant.  Sorry bikers!

Scott was able to catch me as I was running down High Street towards the finish. 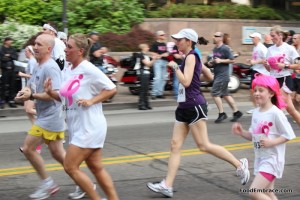 I was ready to be done running by this point.  It was slightly hot that morning after I started and all I was thinking about right now was breakfast.  Ha! 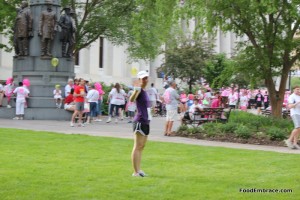 Scott and I had to have a designated meeting spot for after the race or we never would have found each other.  He always finds me at the finish as I’m trying to make my way past all the food and out of the corral.  However, with this race being so large we needed a specific spot to regroup.  We picked one and I was the first to arrive.  I waited for a bit for Scott to make his way over. 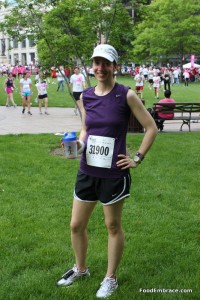 I was counting down the minutes because I wanted my chocolate soymilk!

This race was fun and it’s nice to be able to say I was a part of it.  It’s not a race that you’re going to PR at or even come close to doing any kind of “serious” running.  Way too many people for that! And that’s not the point of the race.  The point is to run for fun, run for support, and to run for a reason.

Have you ever run a race like this? Or a race that supported a charity?