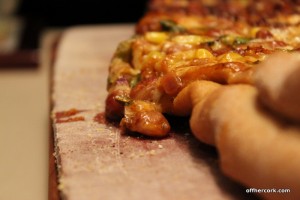 Me: Hey what do you want on your pizza this week?

Me: Pinto or black?

And that is how the enchilada pizza came to be born.  Scott said he wanted beans on his pizza this week which is a really odd request, right?  So it occupied my mind for quite some time as I tried to figure out how I was going to work this pizza out.  I brain stormed about it for awhile and finally came up with my master plan.  It was going to be reminiscent of eating an enchilada.

It wasn’t until Wednesday where I realized that it would be totally fitting since Thursday was going to be Cinco de Mayo. 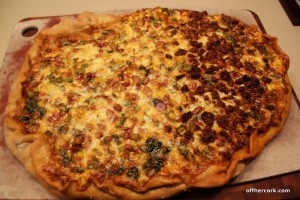 I made a regular pizza crust. Had I had a finer ground cornmeal on hand, I would have made a cornmeal based crust.  If you have that, go for it!  It would be amazing!

I made an enchilada sauce to use in place of pizza sauce. I’m still tweaking this recipe so you’ll have to wait on that.  It’s almost there so it shouldn’t be too long before I can make it again and finalize it. 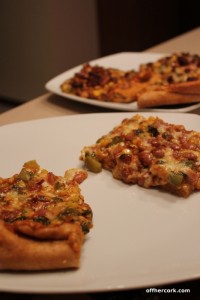 The toppings were based off the original bean request.  I mixed:

I mixed them in a bowl and added in some salt, pepper, and touch of chili powder.  Topped it with the juice of 1/2 a lime and  a bit of olive oil.  Mixed and let sit in the fridge all day until pizza time.  I used the olive oil to help keep the beans hydrated during cooking.  Otherwise they could have dried out. 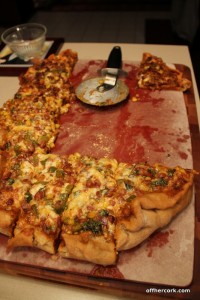 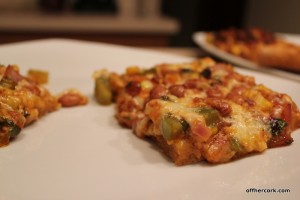 The pizza was amazing.  It came out exactly as I hoped it would, in fact probably better.  When the cheese is bubbling up and over the side, you know that you are about to eat something that will be remembered for a while.

This was an ooey gooey pizza full of flavor and very filling.  Though we did each go back for another slice!  I also wanted to top the pizza with chopped avocado once it came out of the oven but we were so terribly hungry by the time we go to eat last night that it slipped my mind.

I’ll definitely make sure to add that for next time because there will be a next time for sure.

Very successful Pizza Thursday this week!  Did you do something special for Cinco de Mayo?