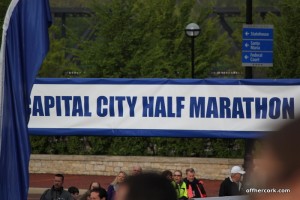 Saturday, May 7th was this year’s Cap City Half Marathon.  This happens to be my favorite race in Columbus.  It was the first half I ever ran so naturally it holds a special plate in my heart.

The past two years I have run this half but this year I did not.  It was not in the cards this year for me to have time to train properly for a May half. Once I realized this I was terribly bummed out.  I can’t even tell you how much it bothered me to know that I wouldn’t be running in this year’s Cap City half.

Then the race coordinators decided to add a “Quarter Marathon” to this year’s race.  That means there was the half, the quarter, and a 5K.

I signed up for the quarter because I knew that I would be able to run that no problem.  I was sad to not be running the half but at least I still got to participate in my favorite race. 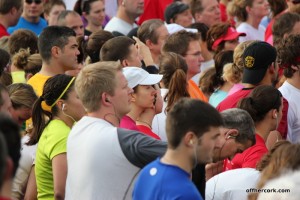 I’m in the magenta shirt and white hat.

I thought I was going to have a repeat from Columbus Marathon and start super late.  We did not leave late but the traffic was really backed up. It didn’t occur to me that since the quarter race was added this year that that would result in a bump up of participants.  The wait on the highway to get off the highway was close to half an hour.  Yikes!

We parked in our super secret parking spot (no I’m not telling so don’t ask, it’s a secret!) and walked over to the race.  I had trouble finding the bathrooms and finally saw them all the way on the other side of the start corrals.

Seriously?! They definitely needed to be closer.

I sprinted over to the bathrooms and waited in line.  And waited.  And waited.  Then I sprinted all the way back to the start corrals and tried to weave my way in.  I made it just in time, a few minutes before they released the corral I was in to start the race. 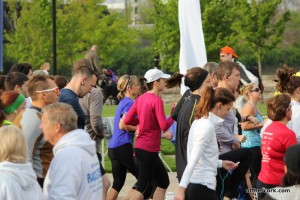 I started the race and didn’t look back.

With the low running that I’ve had lately thanks to weather, this wasn’t a super easy run for me.  It was challenging! I also decided to push myself and run my heart out. I didn’t even know how far I was running! I didn’t know if they would just make this a 10K = 6.2 miles or if they would literally cut 13.1 in half.  I only knew that I would be running 6ish miles and told Scott I’d see him in about an hour.

The weather was overcast with a slight chill.  It was maybe just below 50F as it’s always colder downtown than it is everywhere else.  It was nice running weather though because it was warm enough that you didn’t get cold while running.

Lovely.  I still had some left in my cup, so I sipped and took off.

The quarter marathon ran with the halfers up to about mile 3, I think, and then we split off from each other.  It was a huge split too, not many of us went to the right following the quarter route.  In my mind I waved goodbye to the half, told it that I would see it next year,  and continued on with my quarter journey.

It was a much smaller crowd and that goes for both runners and spectators.  That’s okay, the half is the big event so I can understand the low support for the quarter.  There were some along the path and it was nice to see them.

I was hot during the run and since I felt like I was running my heart out, I was really huffing and puffing. That’s not to say my breathing was off, it was perfectly fine.  It was related more to the fact that I was trucking it and breathing more.

I could see a huge stream of people running perpendicular to the road that I was on and realized that we were merging with the halfers again.  I actually didn’t think I would see them again at all. As we were coming in off a side street and merging with the other runners, I could tell they were confused and curious as to what we were doing.

I promise we weren’t cheating! Some of them actually gave me that kind of look!

The mile 5 mark was an amazing thing to see.  I knew the race was close to being done and I knew that I gave it my all and would finish strong.

The downside to this race is that I didn’t get to see Scott at all along the way. I’m so used to seeing him at some point during my race that not being able to see him really bummed me out.  I realized that, for me, it’s nice having that support system there during a race.  Knowing that someone is standing there cheering for you and proud of you is a great feeling to have.  Without it, it seems odd and I didn’t like it.

I knew he would be at the finish though! 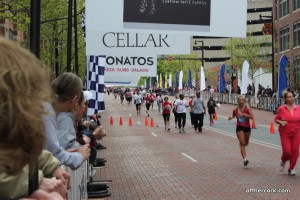 At close to the quarter’s 6 mile marker, we split off again from the halfers and I knew this would be the home stretch. There was another water stop and I quickly stopped for a drink.  I must have looked like a hot mess because one of the volunteers asked me if I was alright.  Ha!  I was drinking so I gave him a thumbs up and went on my way.

Since I knew the finish was close I decided I could sprint the rest of the way. 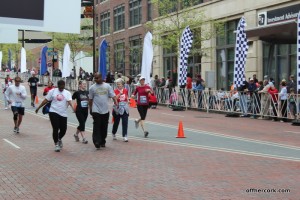 I didn’t even see Scott as I was running to cross the finish. In fact I didn’t see anything or anybody because I was so focused on sprinting and focused in on crossing that finish line. 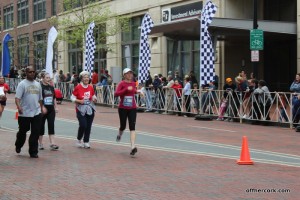 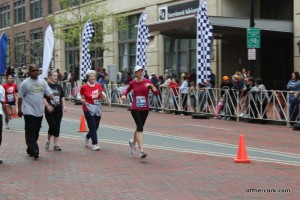 So focused that I didn’t even realize I was elbowing grandma to get out of my way.  Whoops!

Almost done so it was time to push even harder! 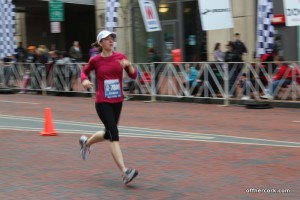 A little blurry because Scott is still getting used to our new camera for action shots. 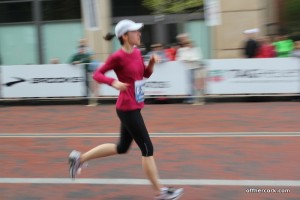 That’s full on, I can’t see anything but the banner, sprinting. 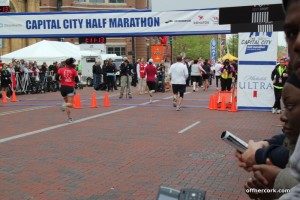 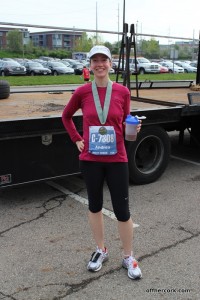 Complete with my chocolate soymilk at the finish!

They were passing out sparkling wine and pizza at the finish line.  But at 9am, I passed.   In all honesty, smelling pizza at the finish is pretty nauseating.  I quickly moved away from it and it wasn’t long before Scotty found me wandering around.  We walked around for a bit to keep my legs from stiffening up and then I stretched them out on the back of that truck once the picture was taken.  Keeping it classy!

The race had a few challenging hills to it, two of them back to back near the finish which was great for testing endurance and building strength.

In other words I cursed their names.

It was a great race and I had a fabulous time running it.