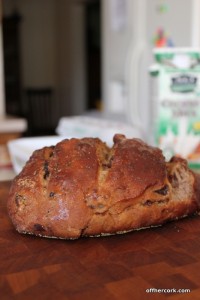 Sunday was a day of rest at the OHC homestead and it was greatly enjoyed! Though we did have chores to do, it wasn’t anything that was super pressing.  Just things that needed to get done.  The day started off with some much needed sleeping in. I got to sleep till 10am! Whooo!

Last week was a busy one with lots of school work, meetings, and outings with friends.  Saturday we headed out to dinner with our friends Emily and Jim, where we dined at Spagio. It’s a lovely restaurant in the Grandview area. Then it was over to a bar to watch a band perform.  The band didn’t start until about 10pm and wrapped up after midnight.

Whew! That’s one late night for this girl right here. I was very much ready to be in bed by the time the band finished.  They were great (though it was a touch too loud) playing tunes that had a bit of blues and 50s style rock to it.

Since I was out so late, the sleeping in made total sense.  I also had enough smarts about me to get my long run done on Saturday morning.  I did 9 miles and busted that out with a 9min/mile pace.  NICE!  That’s my longest run since last fall and I was feeling pretty pleased with myself.

Now back to Sunday! I woke up and had a lovely cup of coffee while watching some Food TV.  Then I woke up S-Love and got started on Sunday Breakfast. We had to make a run to North Market on Saturday and I stopped by Omega to get some bread.  They still had some cinnamon raisin bread with walnuts out so I quickly snatched up a loaf of that.  Now what to do with it?  Of course toasting it would have been fine but I wanted something a little more than that.

I put my thinking cap on and thought about it Saturday evening.  Finally it came to me! 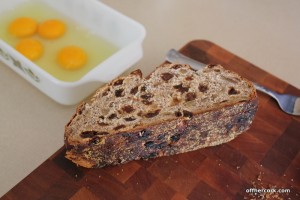 This dense and chewy bread would make a great bread to use for French toast! I made up a quick custard of some eggs, unsweetened coconut milk, cinnamon, and vanilla.  No sugar because the bread was already sweet enough. 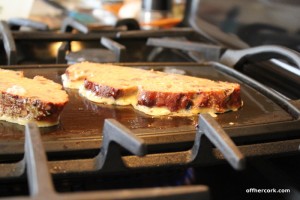 Two slices for each of us! The bread was dipped, flipped, and then slapped on the griddle to cook up. 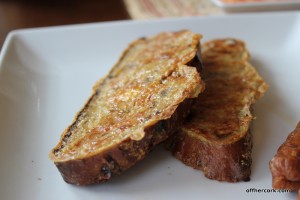 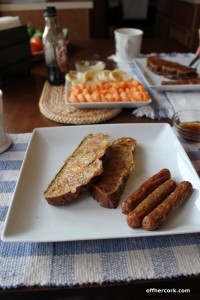 Some Irish butter on top and dipped in maple syrup. We had some chicken sausage on the side and some fruit as well. Along with my favorite coffee, Extra Dark French Roast, from Whole Foods and I was a pretty happy lady.

After breakfast I spent a lot of time in the kitchen doing some prep work for dinner but also making some veggies up for Rocks.  He loves his veggies and totally hovers around when I’m making them.  He knows they are his veggies too and not something that I’m making for dinner or for some other purpose.

Once that was all done, it was time to give Rocks a bath.  He’s on a good diet which means his skin and coat are in good shape, therefore he only needs a bath every few months or so.  Plus he’s a boxer with a super short coat, so he dries pretty quickly.  Now he hates baths but tolerates them well because he knows he’ll get cheese if he’s good. He was such a good boy yesterday and received some Irish cheddar for his troubles.

He was out of the tub and dry, and I got started washing all his blankets and such.  No sense having a clean dog with dirty blankets, right?  I also did some school work.  Boo to that but it needed to get done!

I got potatoes baking for dinner, pulled out the steaks so they could start getting rid of their chill, and chatted with my mom.

Then Scott and I totally had to do it. We couldn’t hold out any longer.  It needed to be done. 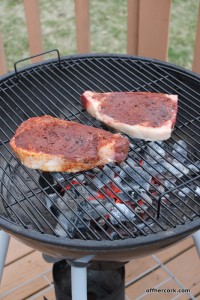 We busted out the grill.  I know it’s pushing the limits and rushing the season, but it had to happen.  Plus the weather was decent and both of us really wanted some grilled steaks! Those babies were huge too!  Lovely shell steaks from Bluescreek.  I slapped them with a dry rub earlier in the day so that they would get happy happy.

I like mine medium-well (closer to well then medium) and Scott is starting to appreciate a medium cooked steak. 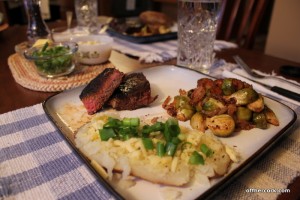 We had grilled steaks with loaded baked potatoes and pan roasted brussel sprouts.  The potatoes had:

Normally I would have done sour cream (2% Fage) as well but we had horseradish cream sauce with the steaks so no cream for the potato.  Horseradish and beef are just meant to go together. It is by far one of my very favorite food combos. 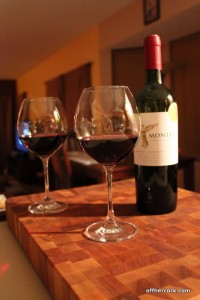 Wine for the evening was a red cab by Montes, 2008.  It was pretty dry at first but we have an aerator and that helped a lot.  We sipped and watched the Pens fall apart to the Rangers.  OY!  I found another way to console myself. 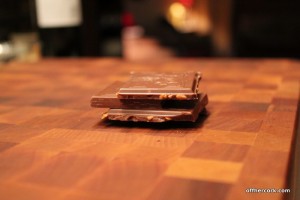 That friends, is Godiva’s milk chocolate with salted caramel toffee pieces.  It’s just as fabulous as it sounds.  I don’t usually like milk chocolate, it’s too sweet for me but the caramel was calling out my name.  It is a sweet chocolate but it’s so very good.  One square is plenty, then I can move to a dark chocolate.

Then I headed up to bed and called it a day!

How was your weekend? Did you do anything exciting or celebrate the start of spring?