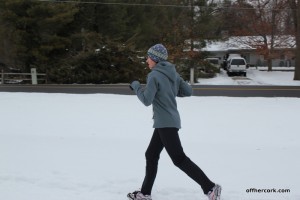 This winter running was definitely a little rough going for me, both mentally and in dealing with the elements.

I was lucky enough to be named a YakTrax Winter Athlete and I was so excited about that! Plus I thought it would definitely be some motivation to get me out the door since I was acting as my own worst enemy.

Then don’t you know that Columbus didn’t see much snow this year.

Oh it snowed, don’t misunderstand me. But the snow didn’t really stick around leaving the streets and sidewalks clear.  That meant that I couldn’t use the YakTrax.

I started feeling like a big YakTrax fraud! I had talked up Columbus’s nasty winter weather and here we are with no snow!

We had ice and lots of it.  Super slick super smooth ice which also happened to be very thin.  Unfortunately YakTrax don’t really work on that kind of ice.  Again I could’t use them.

I was stuck inside a lot this winter because of the ice and other general gross weather that was going on at the time I wanted to run.  I was feeling very blah about the whole situation.

Mentally I was pretty unmotivated to run. I’m not sure why but wow I was really down about it.  I never felt like running and then I would only go out for short distances.  I just didn’t have the umph.

I ran a few races during the last half of the year and had a blast with those.

In January, I ran my first race of the season and there was snow so I got to use my YakTrax which made me very happy.  I started school that same month and was hit with a huge schedule change.

My running mojo is starting to come back now that the weather is turning towards spring. However the weather is also making it difficult with lots of rain and wind.

Maybe that’s the point? Set me up so much to be ready to run that by the summer I won’t be able to stay inside!

How was the winter for you this year? Were you able to get out and still exercise or did winter get to you a bit too?