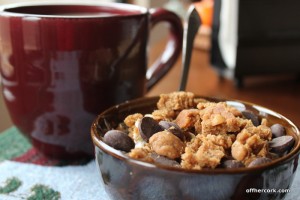 Yesterday was such a gloomy and chilly day.  Winter came back for a visit bringing with it freezing rain.  Lovely, no? Once it started it continued like that all day long.  Into the night the freezing rain changed over to regular rain and it’s been raining since then.

Welcome to spring! Where we get a heck ton of rain here in Columbus.  Thankfully it only lasts a few weeks!

Yesterday after my run, I was looking forward to coffee the most.  In our huge Sunday mugs with plenty of creamer to go around!  We use vanilla soymilk as our creamer of choice and if we’re treating ourselves, then it’s Snowville Half and Half.  That’s for special occasions!

I decided to make my typical recovery yogurt bowl a little more fun with a crumbled up PB cookie on top! In the wee bowl was:

Oh heaven! So stinkin’ good especially if I was lucky enough to get a bite of cookie and chocolate! I settled down on the couch with my pre-breakfast and chilled out with some Food TV.  I watched Giada tolerate cooking with her aunt who seemed particularly full of corrections that episode.

I have to say that Giada, of all the cooks, seems to have the most excitement about food and the things she creates.  Everyone else just seems very reserved like they can’t get excited over food because maybe it doesn’t look professional.

If it was me, I’d be dancing and clapping too because food is fun! And yummy! 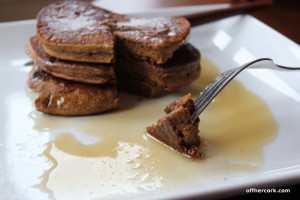 The great thing about making pancakes is that I make a bunch of them at one time.  I freeze them and they are ready to go when I need them.  Yesterday, I didn’t feel like making a new batch and creating a mess in the kitchen.  I pulled out some frozen pancakes and plopped them in the toaster oven to heat up and get a bit crisp.  This week we revisited some pumpkin molasses pancakes.  Very similar to gingerbread in taste. 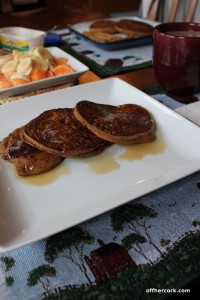 Mine were topped with butter and maple syrup along with more coffee and some fresh fruit.  I also had some chicken sausage that I stole off of Scott’s plate. 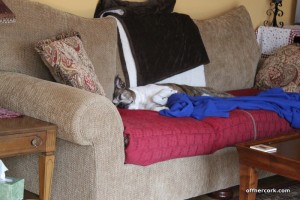 Our Sunday could be summed up just like this.  We did nothing and it was fab.  Well I did more “nothing” than Scott did because he worked on my computer.  To just briefly dork out on you, he switched it and put in a quad-core chip for me along with stripping out Mint and installing Ubuntu proper.  Mint, I have discovered is a huge (HUGE) resource hog and on the suggestion of a twitter friend, I switched out to Ubuntu.  Still in the testing phase, we’ll see how it goes.

I read and putzed around the house taking a much needed unplug day.  Since Scott was working on the desktop, I decided to avoid technology all together save for a few email checks.

I got dinner started in the oven and chatted with my mom for a bit.  Eventually it was time to eat and watch the Pens game that we taped. 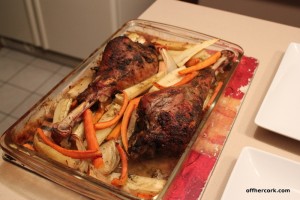 I had some turkey legs that I pulled out and roasted along with some carrots and parsnips.  We also had stuffing and homemade gravy.  I added some white wine to the roasting pan for the turkey legs so I used some of that same wine in the stuffing mix.  Excellent! 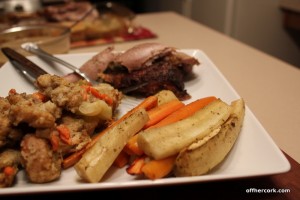 Aside from the turkey, dinner was fab.  I realize that sounds crazy but the turkey didn’t turn out like I hoped.  It was dry and very tough.  The legs have a lot of “stuff” in them that you have to work around to get to the meat making it more frustrating than enjoyable.  I would not purchase legs that big again because it did not work out.  I mostly ate veggies and stuffing dipped in glorious gravy.

The Pens game was also a bust.  They weren’t playing so well. 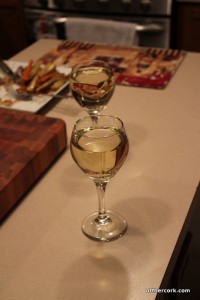 Wine (and chocolate, not pictured) helped somewhat but not enough to bring about a win.  Ah well.

Even though I slept in and didn’t do much around the house, I was exhausted and headed to bed early, another weekend in the books.

How was your weekend? How’s your weather, are you still experiencing “winter” like conditions?