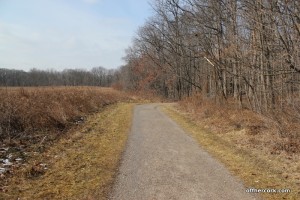 Moving to Columbus or just Ohio in general means that you will be dealing with the high possibility of tornadoes.  This was something that I was not aware of when I moved here.

Ohio is considered the Midwest and the Midwest deals with tornadoes.  However when you think about “The Midwest”, you think of places farther west like Indiana, Illinois, and Iowa. Kansas and Oklahoma as well.  Places where the storm chasers live and where the chance of seeing Auntie Em’s house flying away is probable.

But Ohio is not immune to tornadoes and dealing with the crazy weather that brings them here.

I didn’t know this.

Oh I grew up with some serious thunderstorms and sometimes a watch would be issued but no one paid any attention to that because where we lived was not a tornado happy place.  The chances of it happening were slim to none.

Here the crazy storms and such didn’t phase me.  I grew up only three hours east of here, how different can it be, was my mentality.

In fact, we’ve lived in Ohio going on 6 years now and 5 of those years have been in a suburb of Columbus which is in Franklin County.  Franklin County has a tornado siren system that goes off when a tornado watch or warning has been issued.  There is also a weekly test of the system on Wednesdays at Noon.

I didn’t realize this until about, oh last year sometime.

See, where I grew up, my town had a volunteer fire department.  There were sirens located all around town that went off letting the volunteers know they needed to haul it to the department, get their gear on, and head out to a fire.  There was also a weekly test every Saturday at noon.  Those sirens and the sirens here sound exactly alike.

Since I grew up with sirens going off all the time and knowing it wasn’t for me, that meant I didn’t have to pay attention to it.  Eventually it becomes background noise and you reach a point where you don’t even notice them anymore.

Fast forward to living here with sirens going off and guess what?  I’m not paying attention to it because I thought it was for something else not related to me.  It wasn’t until last year, during a particularly bad storm that the sirens were going off at a rapid rate.  Enough that it was finally not background noise any longer but something I was fully aware of, at which point it dawned on me, “Oh wow! Maybe that’s a tornado warning or a warning about the storm.”  Causing me to log online and see if we were under a watch of some kind.

Now you may be thinking to yourself that I must be totally daft but when you grow up in an environment that doesn’t deal with a specific type of weather threat, then it really doesn’t enter your mind as a possibility.

This is true no matter where one lives. For example, the South and snow aren’t really friends are they?  The East doesn’t have to worry about earthquakes like the West.  Coastal states deal with hurricanes and tropical storms while landlocked states do not.

The concept of tornadoes are new to me.  And when one isn’t from Ohio and you move here, you don’t get an instruction manual.  There’s no pamphlet telling you what tornado sirens are and what you’re supposed to do when they go off.

In fact, it took some major digging and summoning up serious Google-Fu to even find anything on the sirens and what course of action to take.  The reason I started looking was because last night we got hit with a very serious thunderstorm.  At 4:30am the sirens started going off and went off A LOT with the cycles very close to one another.  I love thunderstorms but last night had me concerned.  While Scott and Rocky slept, I searched the web to figure out what we were supposed to do.

I didn’t find much but what I did find, I’ll share with you because maybe you’re new to Ohio as well.  Maybe you’ve never had to deal with tornadoes before either.

What to do when the Tornado Sirens Sound:

The sirens sound when ever a tornado watch or warning has been issued.

A WATCH means that the current conditions are good for a tornado to form.

A WARNING means that a tornado has been spotted some where and to take shelter some place.

To find out which your county is under, check your local news stations.  For Columbus we have:

10TV also has a Facebook Page for it’s weather department.

There is also AccuWeather and for storm tracking with real time radar, there is Storm Pulse.  It is the best weather tracking site I’ve found.

When the sirens go off, keep an eye on the weather outside your window and check the above sites to see if there is a watch or warning in your area.  Stay alert and pay attention.  You’ll know when to take to the basement to seek shelter because it will either be on the news OR the weather will be bad enough that you’ll start to get nervous.  When that happens, listen to your instinct and just head to the basement or lowest part of your house.  Have bottled water, snacks, and blankets handy in the event that you’re there for a while.

The sirens will stop when the watch or warning has been lifted.  Keep checking the weather to see when that happens.

I hope that helps some of you who are like me, and are new to this situation. Stay safe and have those links bookmarked for easy access for when you need them.

6 thoughts on “Living with Tornado Watches”