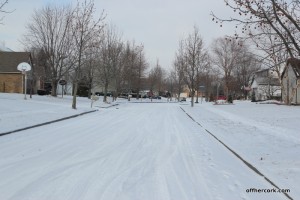 Winter running is back! We’ll see how long it lasts this time.  It figures that I go and score myself a sponsorship from YakTrax only to be left with no snow and 50 degree temps.

Ohio sees some really extreme weather changes but typically in the winter, we stay winter. Temps above 40 doesn’t happen all that often, usually occurring in mid to late March just to tease you in thinking that Spring is close at hand.

It’s not.  We don’t see spring till April.

This past week, we got snow again back in the area. This is a street in my hood (not my street) and you can see that our roads do not get plowed or salted.

It’s like Vegas, what happens here stays here and the residents are left to deal with the aftermath.

I was able to put on my YakTrax and get some snow action this weekend.  Saturday I went out for a short 4 mile run.  Short because the wind and snow that morning were a little fierce and pelting me in the face. Also making it hard to see at times.

Today was a huge change from Saturday! Hardly much snow and a lot colder. I did what I thought was 8 miles which ended up being 7.5. Grrr! I would have added on that extra half mile had I known.  I’m still getting used to the new running routes I’ve plotted out and their distance. Ah well it’s all for the best I guess because I was cold and ready to be inside when I was done.  It was 5F today for my run but thankfully no wind! Cold really is nothing, after about 10 minutes you get used to it as long as you are dressed properly.  That’s key!

Anyway, there was only a slight breeze today that was not constant so it wasn’t anything to be concerned about.  I had to take my YakTrax off at the halfway point because there just wasn’t enough snow around for them to be necessary.

I have to tell you guys, my running mojo was a little down this week.  I found some new routes to run and while they are fine, it means that I have to cross a busy street in the morning.  I hate having to deal with traffic!  The road has three schools (one of which is a high school, teen drivers. Excellent.) and it’s a main road that takes people in and out of the surrounding neighborhoods.

The entrance to the new area I’m running doesn’t have a crosswalk by it.  The closest is at a major intersection where I would be fighting four lanes of traffic plus cars trying to turn.  I have no desire to tackle that section.

So I cross only the one road as fast as I can where there is no crosswalk, right at the entrance to the new neighborhood.

It’s not fun or easy to cross yet that is my only option.

I admit that I let this get to me this week.  I really didn’t want to have to battle that road.  I also was ticked that I had to change my route because of being attacked by a dog.

I didn’t think I was angry about it but I realize that I am.  I’m mad that now I can’t run in that area or walk my dog over there.  A whole neighborhood is now off limits because of that.

I won’t let it keep me down for long and I’ll move past this hitch.

I have to, I’ve got 1/2s coming up in May that I want to run. Time to start training and kick my mileage back up.

Which means, I’ll have to nut up and cross that road.  I will have to make it work for me and not against me.

Have you ever had to change your running route because of some outside reason or situation? How did you feel about it?