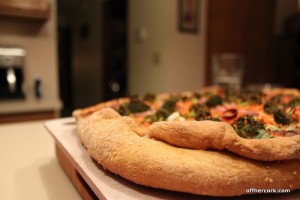 How is everyone doing this week? Admittedly, it’s been kind of a long week here at the HQ. We’ve had lots of work and not such fun errands that needed attention.  I was very much looking forward to pizza and hitting the couch for some much needed down time.

I decided to play around with the pizza crust this week.  I wanted to change things up and see what happened.

Nothing too drastic mind you, because you really shouldn’t mess too much with a good thing. You know?  But I had to try just this once.

I put pumpkin in the pizza dough this week.  Oh yes, you read that right, pumpkin.  I was curious to see what it would do to the crust and how it would change the texture and taste.  Would it do much of anything? Would it be a disaster?

You never till you try.

I’m pleased to say that this turned out better than I expected! 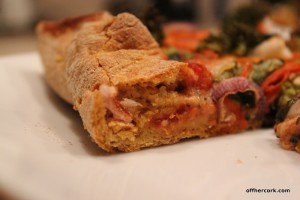 I didn’t want to add too much pumpkin because it can weight down a dough (of any kind, cookie, pancake, quickbread…etc) and since this was the first time experimenting with it, I didn’t want to risk total failure.

I also added in 3 cloves of grated garlic and some Italian seasoning hoping to bump up the flavor index some. The pumpkin required a little extra flour to be added to the mixture.

The dough ended up being very soft and a little sticky.  I became concerned it might not cook up that well.  It rose like crazy though! Easily the most out of any of the doughs I’ve made.

It rolled out very easily but was prone to pulling apart when I placed it on the transfer sheet.  The holes were patched up without much fuss.  I topped it and crossed my fingers hoping for the best. 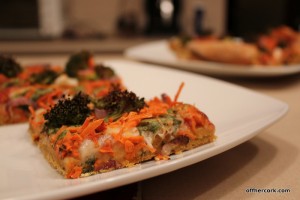 Because I was experimenting with the dough, I didn’t want to go crazy experimenting with toppings and sauce.  When fiddling and adjusting recipes, only focus on one element at a time or else the chances of failure increase. Plus it’s easier to stay focused and make notes when you are only fiddling with one ingredient or aspect.

The pizza cooked up great and the crust came out very crispy and had a slight denseness to it.  It also had a tiny orange tint to it, which I loved.  The dough was a tad orange and I was wondering if that would bake out during cooking, however it stuck around!  Hooray! That makes things a little more fun I think.

Next time I will add more pizza sauce as I top it because this dough actually seemed to absorb the sauce.  As I was eating, it seemed like there was almost no sauce at all.  Strange side effect! But noted for the next go around.

Despite 3 cloves of grated garlic, the dough really didn’t have much of a seasoned flavor to it which at first I thought was odd, but then because it rose so much and because it was such a big dough, the flavor probably got muted somewhat. 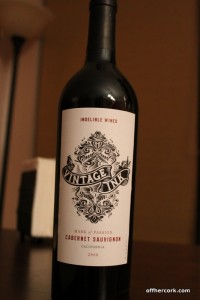 Wine for the evening was by Indelible Wines and was a lovely Cab called Vintage Ink.  A really light Cab with very fruity and floral smells.  We sipped while watching House Hunters.  Anyone see the International episode last night with the chick buying a condo in Poland?  Was her Realtor swarmy or what?!

How was your week? Are you ready for the weekend? We totally are!