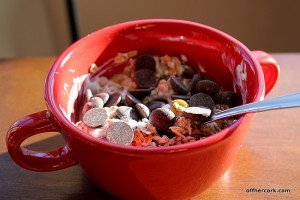 Yesterday was full of nothing and that’s pretty much how I wanted it to be.  Last week was loonnnggg. Classes started for school and I was still trying to work my way through some of the fundamental classes that they encourage you to go through first.

There are 14 of them. Complete with additional reading, handouts, and assignments. Good lord. They also stress taking your time and doing them when you can but when it is also stressed that you do them before classes start well then you can imagine my highly overwhelmed feeling.

Thankfully a lot of these classes were focused on things I’ve already done in my personal life like reflecting on how foods make you feel, introducing new food items into rotation, and creating healthy recipes.

OHC has that down!

Saturday was glorious in that I got to sleep in and it was an extra rest day! Booyah! It was too windy out for a run and my bod was sore already from school stress and lots of weight work earlier in the week.  I also didn’t have to even get out of my jammies! Rocks was a little under the weather (he’s 10, it happens) and therefore no walkies for anyone.

I planted my butt on the couch and cranked out the rest of my fundamental classes.  Now I just have to get all my notes typed up!

Sunday I got a chance to run and it felt glorious! I was cranky because I didn’t sleep well the night before so my start time was later and I knew that a long run wasn’t happening.  Once I was outside and had a chance to get some sun on my face, all was right with my world.  I was able to push out a good five miles and something is better than nothing.  I’ll take it!

Once I got home and showered, I was starving! I quickly stuffed my face with some:

Who says you can’t start your morning off with chocolate?  Not this sister! 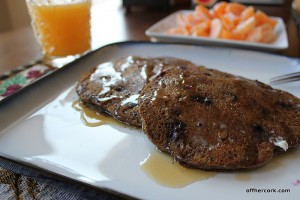 I didn’t take a pic because I don’t want to embarrass him (today) and because he needs a haircut and shave like now.  He looks like mountain crazy.  Sleepy bedhead boys are my favorite though!

Once the stew was going in the crockpot it was time to make Sunday Breakfast!

I made pancakes even though I didn’t really feel like pancakes.  I know, very hard to believe.  Blueberry buckwheat pancakes with fresh squeezed OJ and some clementines.  I had a ton of oranges that needed used up. They were not good for eating so I decided to juice them.  Well I had Scott juice them.  Would you believe 10 oranges only gave us 2C of juice. We each had a small glass, it was tasty but way too much work.

We headed out for a short walk, it was a tad breezy so it was best not to stay out too long.  The sun was still out and shining, such a nice change!  Of course more winter weather is headed our way so we have to soak it up while we can.

Literally the rest of the day was spent with me on the couch not doing a darn thing.  After our walk, I changed back into my jammies and stayed that way the whole time! 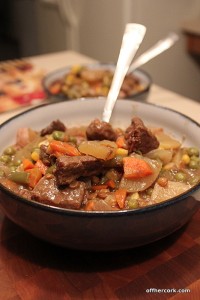 This stuff smelled glorious all day long.  Scott kept walking over to the crockpot and sniffing at it.  Ha!  It’s loaded down with veggies, lentils, and local beef.  Plus some red wine for good measure.  Both of us had heaping bowl fulls!

We finished off Saturday’s Pens game while we ate.  Horrible game but at least they won. 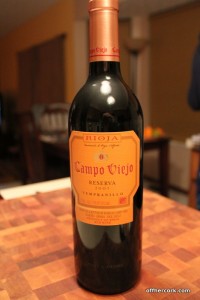 Wine for the evening was a Campo Viejo Tempranillo.  New to us and very delicious! Super fruity tasting and smelling plus it wasn’t too dry. It was a lovely lighter red wine.

We spent the rest of the evening watching Inception.  We don’t do movies at the theater, I would much rather have a nice dinner out than spend that kind of money on something that will probably not be very good.  Anyway Inception was alright.  The ending isn’t a final ending, it is left for the viewer to interpret which irritates me.  I know some people like that but I do not.  I didn’t invest all that time into watching or reading something only to be left hanging, thanks.

Also? You do not have to see this on the big screen, don’t let folks fool you.  It’s totally fine to watch on TV.  Though, IMO, there aren’t many movies that warrant needing a huge screen to watch them on.

Whoa! Sorry to sound like such a movie hater! I swear I’m not, I’m just super picky about what I like and what I don’t like.  Sadly, most times I end up not liking something, especially if everyone else likes it.

After that I headed up to bed and called it a night. I was wiped out! 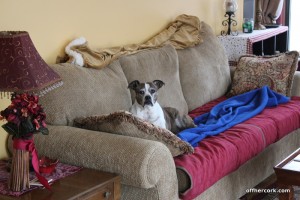 How did you spend your weekend? Was it relaxing or productive? Or both?

11 thoughts on “Full of Nothing”