Pad Thai is a relatively new to me dish.  I’m not a huge pasta eater and so the idea of the dish never really appealed to me.  Then one fateful evening I decided to order some and was blown away.  I loved it!  Sure it was a little lacking on veggies but the sauce, oh man, the sauce is what sealed the deal for me.

I am such a sucker for spicy sweet combo.  I like my BBQ sauce that way, I like salmon done that way, and I certainly enjoy Asian dishes that way.  Pad Thai totally fits that to a T.  I tried recreating it on my own many many many times.

It was alright but it wasn’t exactly what I was looking for.  I saw several recipes using coconut milk and peanut butter.  Yes this created a nice sauce but it wasn’t even close to a Pad Thai sauce.  It was way too heavy and creamy, closer to something like a satay sauce.

This wasn’t what I was looking for.

Then Charise commented here not that long ago and pointed me in the direction of this recipe.  It is a breakdown of Pad Thai and how to create it.  It discusses the ideas behind the different ingredients used to create the sauce and explains exactly how to make the sauce.

Seriously one of the better recipes and tutorials I have seen.  I have it bookmarked and am never letting it go!

I was in need of some Pad Thai recently and was bound to create some that would be amazing.  I turned to the recipe linked and read it from beginning to end.  I didn’t have any of the ingredients on hand that Chez Pim used.  I wasn’t going out to the Asian grocery store any time soon and I really needed that Pad Thai quick before somebody got hurt.  I decided to take what I learned from the article and put it to use with ingredients I had on hand.

Those four elements make up the classic taste of a Pad Thai sauce.  Okay, I can work with that.  I finally came up with a recipe that creates a sauce close to what I’ve experienced in restaurants.  While it isn’t perfect, it is so very close that I’m calling this a win.  It will be used as my base from now on for Pad Thai. 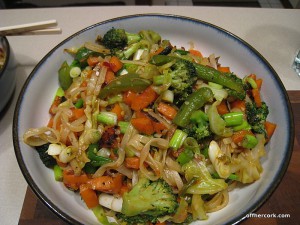 In a small sauce pan, whisk together ingredients and bring to a simmer.  Allow to simmer for about 5-10 minutes so that the sauce reduces down a bit.  You want a thicker sauce to help glaze the noodles and veggies, but still liquidy enough that it will cover the entire dish.

In a medium sized high sided skillet, heat olive oil over medium heat.  Add in the veggies except the green onion.  Coat with the oil and sautee until they just start to get soft.  About 7-10 minutes.  Meanwhile, in a large pot of boiling water, dump in the pasta and allow to cook over a gentle simmer.  Takes about 5 minutes.

When the pasta is cooked, drain it and add to the veggie mixture.  Then pour the sauce on top and combine until everything is covered in the sauce.  Add in the chopped green onion and sesame seeds, and combine one last time. 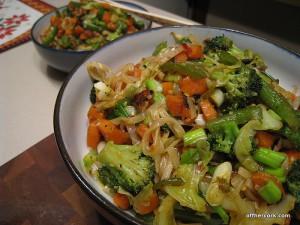 I was extremely pleased with this dish!  It was pretty spicy for me but I still loved it.  I finally created the right type of sauce!  It was not heavy, easy to put together, and utilized the Four “S”s Rule.

Of course if you want to make this vegetarian, you don’t have to use chicken broth as a base.  You can try water or veggie broth, or maybe even some No Chicken Broth.

I love green onions so I made sure this dish brought plenty of that to the table.  This is open to plenty of interpretation as well, maybe you like mushrooms or would love some scrambled egg added to your Pad Thai.  Whatever you want to put in there, put in there! Great way to use up leftover chicken or pork as well.

I’m currently out of rice noodles and that is the only thing keeping me from making this dish again!  Next time you’re in the mood for Pad Thai, try creating some yourself.  You might be surprised by the outcome!

Leave a Reply to Rachel (Hounds in the Kitchen) Cancel reply