Part I of my experience at The Market District at Kingsdale can be found here.

Even though Scott and I have lived in Columbus for almost 5 years now, it was only about two years ago that we started exploring it more and expanding our knowledge.  I’m still learning my way around this great city and as I learn, I want to pass along what I find to you.  Perhaps some of these things you already know about and maybe some of them will be new to you.  Either way, we can share in the adventure together!

My first topic for Spotlight Columbus is about the new Market District that just opened up in Kingsdale which is in the Upper Arlington section of the Columbus Suburbs.  I was contacted by the media relations group for the Market District asking me to be their guest at the grand opening of the brand new and first Ohio location.

Market District is a division of Giant Eagle.  Being from the Pittsburgh area, I’m very familiar with Giant Eagle (that I sometimes refer to as Big Bird), their products and their stores.  The Market District part of Giant Eagle is their brand of higher end and higher quality foods at an affordable price.  That part I knew, however, I did not know that the Market District has since gone through some growing phases and has developed into it’s own grocery store which strives to bring high quality and healthy foods to the consumers.

This post is going to be about the store, how it’s divided up and what it has offer its customers. 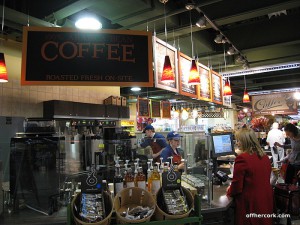 What struck me first about this new store is the size.  It is gigantic.  I thought the new Whole Foods on Sawmill was big, but it’s small potatoes compared to Market District.  This is like Whole Foods and Giant Eagle had a baby because this store is the best of both worlds.

Despite it’s size, it isn’t overwhelming and is divided up smartly and efficiently. The entire second level of the store is for dining in.  It has plenty of seating, along with a small conference room area, and comfortable chairs and couches for a more relaxed feel.  They also provide napkins, condiments, silverware, and complimentary water to cover all your dining needs.  Even magazines to browse while you eat!

It would make a great place to have a business meeting because it’s quiet, comfortable, and plenty of eating and drinking options for everyone. 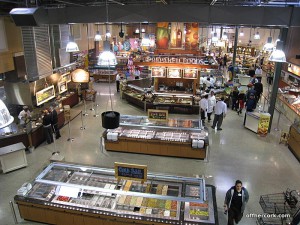 The upstairs provides a great view of the prepared foods section down below and while that might sound strange, it’s actually really nice to look at!  It gives you a chance to check things out and also people watch.

The prepared foods section is enormous and is by far the best I’ve seen yet.

There is a coffee bar with in-house roasted coffee beans.  They have specials and regular coffee to offer.  Next to that is a juice and smoothie bar.  I had a smoothie from there and it was delicious.

In the middle of the prepared foods section is two cold bars and a hot bar. 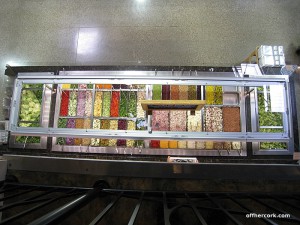 This is picture taken from the second story eating level of one of the cold bars.  Awesome right?  They have everything you could want on your salad including beans and KALE! Okay maybe I’m the only one excited about kale but it’s not a green you see often on salad bars.

The hot bar contains things like chicken, potatoes, and other hot style dishes.

There is also a soup bar offering four soups for the day and on the soup bar are condiments for your soup, like different kinds of cheeses, sour cream and green onions.  That’s putting a lot of thought not only into the design of the space but also taking into consideration of what customers are going to want with their meals. 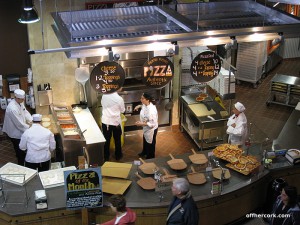 There’s a pizza station with handmade dough and the pizza is cooked in a wood-fired oven.  They offer the pizzas in small personal sizes.  You can purchase one or four at a time.  Four is great for a family or two hungry OHC staff members.  They have any toppings you could want and hopefully will also be offering some whole wheat crust soon.  I asked and they said they were going to have some soon.

That’s pretty standard food stuffs but Market District goes beyond that.  There’s also a crepe and Belgium waffle station.  A rosti station, which is a Swiss dish made with shredded potatoes.  There’s a tandoori station, and an Asian street foods station.  Also another salad station where they will create and toss up salads for you.

Then there is another section that has more dinner meal type foods, like crab cakes, pasta dishes, meatloaves and things like that.

Past the prepared foods section is the bakery where there is everything from breads to donuts and bagels made in-house.  There’s a gelato station with in-house made gelato.

There’s a candy section and also a nut section.  The nuts are roasted in house and there are many different kinds to pick from.  There’s also a nut butter station with almond and peanut butters to be dished up and poured into containers. 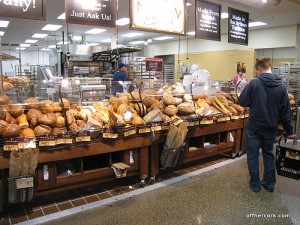 The Market District does a lot of in-house bread baking.  They have loads of different kinds and varieties of breads, including whole wheat baguettes!   That was the first time I came across something like that.  They do in-house donuts and bagels as well.  Lots of breakfast items to pick from along with rolls and buns to make your own dozen.  There is even a pretty intense pastry section with cakes, cookies, and other delights. 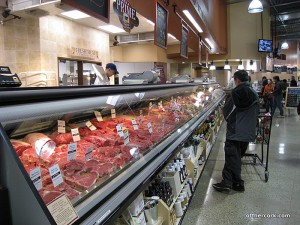 If you purchase meat from the grocery store, Market District has a huge selection to pick from.  They offer not only the staples, but higher end things as well like great quality venison and elk.  If you don’t know how to cook a particular cut, they will offer tips, suggestions, and recipes to you as well.

Even though we are not huge meat eaters here at the HQ, I have to admit the meat case was pretty impressive.  They even had odd things like rattlesnake.  I’ve never had either of those things before!

They also carry lamb from Elysian Farms which is considered the best lamb in the country AND it’s actually local to Pittsburgh which makes it pretty darn close to us as well.

Market District also has a lovely seafood case which offers  a great variety of seafood of all types, to pick from.

The Market District also has something that I have yet to see in any other kind of grocery store. 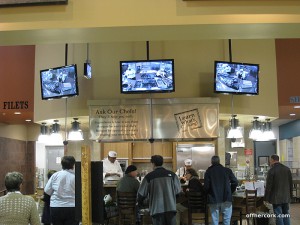 A demo kitchen!  There are cooks there all day long cooking things for you to sample.  Recipes are passed out as well.  If you have any cooking questions, whether it’s a recipe question, a meat question, or a question about technique, you can take it to the demo kitchen for help.  That’s pretty cool, right?

The demo kitchen will also be host to several celeb-chefs throughout the year.  Check the website for a list of events! 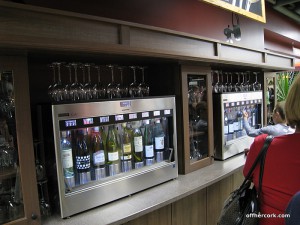 I don’t mind telling you that one of the things I love about living in Ohio is the fact that I can purchase beer, wine, and sometimes alcohol in the grocery store.  It might sound normal to you, but not all states allow such a thing.  Growing up in PA with its weird restrictions makes Ohio look like a godsend.

Market District has an extensive wine selection and also a great craft beer selection.  The wine section boasts another feature, a machine that lets you sample wine!  You purchase what looks like a debit card and add money to it when you buy it.  Then you walk up to the sample stations, swipe your card and pick which wine you want and the amount of pour you want (1oz and 2oz for example).  Fun right?  I know some wine bars do this but to have this in the store is amazing!  Plus you can pour a sample to have with dinner if you are dining in which is very clever.

There are a few cold cases in the wine area which hold cheese and crackers for you to quickly put together a cheese plate.  Or they also have premade cheese plates ready to go with dried fruit and nuts as well.  That’s pretty handy if you’re looking to quickly pick up a bottle of wine and some cheese for a party you’re attending or hosting! 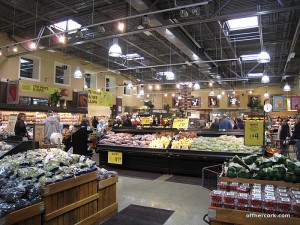 The produce section of the Market District is pretty amazing.  It’s huge and contains just about everything you can want from fresh fruit to fancy mushrooms, to whole sugar canes.  They have organic produce throughout and also a section with pre-cut veggies if you need just a touch for a recipe.

The produce section is where I spend most of my time while shopping (this is why I don’t do Trader Joe’s, it’s all packaged food and no fresh stuff) and is key for me.  If a store doesn’t have a great produce section, I’m not shopping there.  Market District, while there are a few things I use that they don’t carry (like large bags of carrots, 2lbs doesn’t cut it for this sister), they have just about everything else I use and seek out.

While the produce section was one of my favorites, my absolute fave is….. 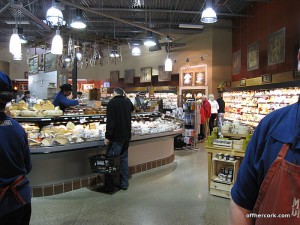 The cheese section!  Over 400 different types of cheeses including their own aging room.  Boo-ya!  I love cheese with all my whittle heart, so after produce this is my favorite section of the store.  The workers are more than happy to let you sample cheese.  In fact they pretty much demand it, that you sample before you buy.  Isn’t that refreshing?

I was snapping pictures when the worker on the right of the pic, see his apron?  Came over to yell at me.  Told me picture taking was totally unacceptable.  I asked if he was sure and he radioed someone who told him it was fine, “but if I find out otherwise I’ll come find you while you’re shopping to let you know!”   Um, okay.

Then he did.  I didn’t get very far before he marched right over to me and told me to stop taking pictures.  I asked what the policy was and he said it was so competitors don’t steal their ideas.

Even telling him I was a local blogger doing a story on the store did nothing.  I was shut down.  So that’s the last picture I have and I don’t get to show the other wonderful things Market District has to offer like a great charcuterie case where there is another aging locker.

A fantastic anti-pasta bar that blows all others out of the water.

A great olive oil and vinegar bar where you can fill up bottles with flavored olive oils and balsamic vinegars.  I bought a peach white balsamic that is light and crisp and fantastic.

I would show you pictures of that but I can’t.

Cause I got yelled at.

That’s all the fancy stuff and of course Market District has the regular stuff too, like normal grocery aisles and a deli counter.

It’s pretty much a huge awesome store with organic and all-natural stuff mixed in with the regular everyday stuff.  If you haven’t been yet, I totally encourage you to go and check it out.