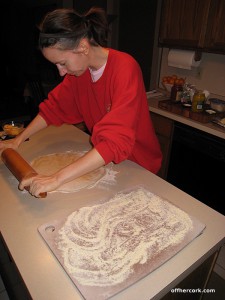 No idea why I’m making a “pursed lips” face but there it is.  You can see all the toppings for the pizza behind me prepped and ready to go!  Whooo!

You guys I was so excited for pizza this week it was ridiculous!  Since I was out last week with the stomach whatever we didn’t have pizza.  I have been looking forward to last night since the previous Sunday!

How has everyone’s week been?  Mine has been not as productive as I would have liked.  We got stuff done around the house, like the last bit of yard work to winterize the yard.  That includes pulling up dead plants, raking leaves, and one last mow for the season.  I did the plants and leaves in the backyard while Scott mowed and did the leaves in the front yard.

We’re lucky that our township does leaf pickup so we just have to pile them by the curb and they come to remove them.  However I think they might have forgotten about us this time around.  They came down our street and put all the leaves on the road but they never came back to pick them up.  Whooops!  I hope they remedy that soon!

Okay, so let’s talk pizza.  Not only was I excited to just eat pizza but I was also excited about one of the toppings that was going on the pizza. 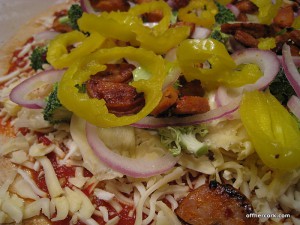 Come to mama my pretties!

Banana peppers are one of my super favorite toppings for pizza ever.  I stopped buying them though because all jars of peppers I found all contained Yellow #5 as an additive.  I have no idea why either.  I mean, banana peppers are already that bright yellow to begin with and pickling them makes them even more bright.  Why the color additive?

However I missed them so much it hurt.

So I said “screw it” and I bought some banana peppers with the best ingredients I could find and since Yellow #5 was the last ingredient, it means it is the least prominent.  So here they are in all their yellow additive glory on my pizza. 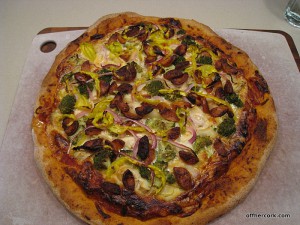 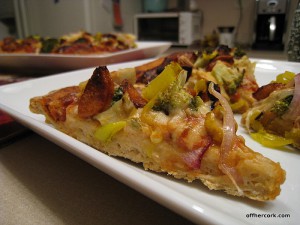 Scott’s side of the pizza had tons of red pepper flakes and chipotle pepper flakes sprinkled on top of the sauce and under the cheese.  However when he helped me pull it out of the oven, he turned the pizza and then I didn’t know who’s side was what since we had the same toppings.

You know I got some of the hot side when I took a bit.  Whooo!  I wasn’t looking for all that spice but I nutted up and ate my pizza. 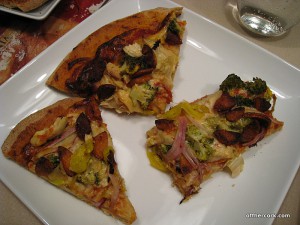 While we ate we finished Wednesday’s Pens game which was horrible.  Oh my gosh it was so horrible it’s not even funny.  Johnson let in so many goals and the Pens just couldn’t get their act together.  It’s best if we don’t talk about it but let it pass in silence. 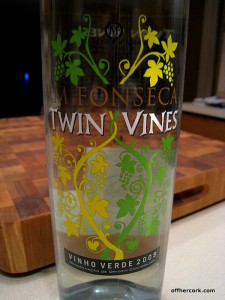 Wine for the evening while watching some House Hunters was Twin Vines Vinho Verde.  I know, we changed things up a bit and decided to go with a white instead of a red last night.  It was light and bubbly and refreshing.  Love vinho verdes!

Tell me about your week friends!  How is everyone doing?

P.S. Can you believe it’s already the middle of November?! Craizness!

One thought on “Pizza Thursday Report for November 11th, 2010”