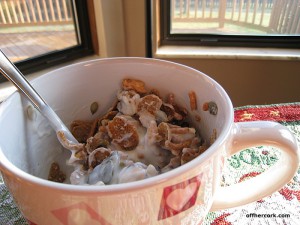 Yesterday was all about breaking the rules and living in the moment.  Well sort of.  Yesterday was the last day of Thanksgiving holiday vacation and I had the Sunday blues like you could not believe.

We had a great Thanksgiving!  It didn’t go quite according to the plan in my head but at the end of the day who cares?  I have nothing to complain about other than I didn’t want it to end.  I am eagerly counting down the days until we are on Christmas vacation!

Yesterday I almost didn’t run.  Almost.  I was tired, it was the last day of vacation, I wanted to spend more time with Scott, insert any excuse here.

Finally I nutted up, braved the 20F cold and headed out.  It was glorious!  I was warm and the sun was out so the temperature wasn’t all that horrible.  I compromised and did 6 miles since I did want to have some morning to myself and spend extra time with Scott.  It worked out well!

We were out of granola and I was HUNGRY so I didn’t have the time to make more.  I settled for yogurt combined with some dry cereal.  Definitely not the same and I was missing the granola in a big way. Umph.

I did some shopping and worked on the blog a bit before Scotty got up and it was time to kick it with some real breakfast.

I was pretty hungry and ready to get some eats on.  I wanted homefries but since we were coming off of Thanksgiving which had a bunch of mashed potatoes, I wanted another option. 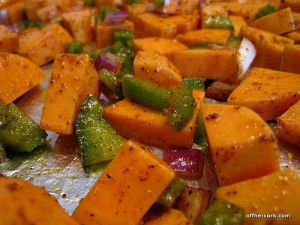 Insert the sweet potato!  We did have sweet potatoes over Thanksgiving as well but in the form of a lovely pie.  Therefore having a savory sweet potato was the perfect solution!  Roasted in the oven with some peppers and onions made for a great side dish. 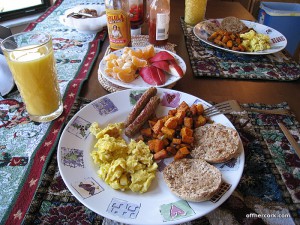 Breakfast was some scrambled eggs, chicken sausage, sweet potato homefries, and an Ezek English muffin along with some fruit in the middle.  YUM!!

The rest of the day was spent with me putting up Christmas decorations and Scott wrestling with some siding outside the house.   A piece of siding fell off up near the top of the house.  We had to order a ladder to be delivered so that Scott could fix it.  We finally got the ladder so the situation was able to be addressed.  It took him longer than he thought it was going to take and I was bummed since I didn’t get to spend as much time with him as I would have liked on our last day of vacation.

When it came time for dinner, he wanted something quick and we decided on the easy way out, Take-Out. 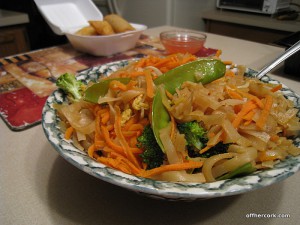 Pad Thai!  It’s veggie Pad Thai which didn’t have nearly enough veggies for me causing me to add in more carrot and broccoli.  There were also some crab rangoons in the mix just for kicks.  The Pad Thai was alright.  This place used to make great Pad Thai but the last few times I’ve gotten it, it hasn’t been stellar.  I need to figure out how to make it on my own.  I keep trying but I can’t get the sauce down right. 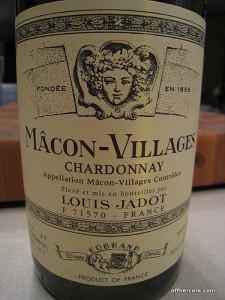 Wine for the evening was a new to us white, Louis Jadot Macon-Villages.  I’ve always wanted to try it but it is a tad expensive.  I personally do not like spending a lot of money on wine, I find it unnecessary.  However this wine has been calling out to me and it was on sale so I bought some.  It wasn’t bad.  Would I drink it again? Yeah, if it was on sale again.

We sipped and watched an old Nick and Nora movie, The Thin Man Goes Home.  Not nearly as good as the previous movies!

5 thoughts on “Getting Set”