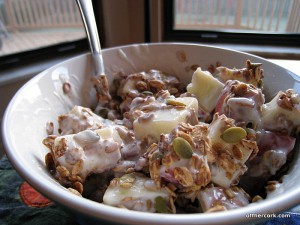 I woke up yesterday morning deciding that it was going to be my last “rest” day.  Meaning, I would take it easy to allow my bod another full day of recovery from the stomach whatever I had going on.  I woke up thinking I had slept in only to realize, “oh right time change”, and reality was that it was 6am and not 7am.

When I woke up on Sunday ready to eat, and that included chewing, I was beyond ecstatic!  Food sounded appealing, my stomach wasn’t uneasy, and the thought of having some coffee again after days without almost brought me to tears.

What?  I love morning coffee, ah’ight.

I plopped down on the couch with a small bowl of:

YUM!  And the coffee was even better!

I wasn’t the only one with cabin fever.  A certain boxer who was in desperate need of a walk was also ready to bound out of the house.  We bundled up and headed out for a lovely walk.  It was such a gorgeous morning and was so cool outside (in the 20s) that it made my cheeks flush and caused him to start prancing around.

Rocky loves the cold.  Like LOVES it.  He’s crazy.

Once home, I snugged on the couch with my laptop, another cup of coffee, and watched some Food TV.  I really do like Giada but my eyes sort of bugged outta my head when I saw her kids show yesterday and she made them grilled cheese sandwiches, fish sticks, and then they got to decorate cakes.  The fish sticks and sandwiches I can handle.  The cakes?  Individual poundcakes that the kids then decorated with as much frosting and candy as they wanted.

That’s a lot of sugar for some toddlers and young kids.  I probably would have demanded her to babysit my kid after that.  No way would I want to be dealing with that sugar rush and crash!

Eventually Scotty got up and it was time to get thinking about some Sunday Breakfast.  Which wasn’t really breakfast at all. 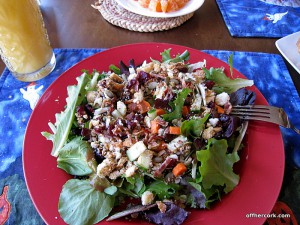 I needed some greens in life in a big way!  Living off canned soup and crackers means that the veg factor is running low.  That had to change!  I loaded us up with huge salads of:

Topped with a maple balsamic dressing. 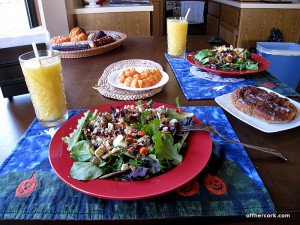 We both had salads, clementines, and faux-mosas.  OJ + Seltzer and I added in some fresh lime juice as well.  On the far right side is a cinnamon bun I picked up at a local bakery for Scott.

I was putting together our salads, and I had cut up the clementines.  I asked Scott to finish peeling them, separating them, and to put them on the table.  This is what was waiting for me. 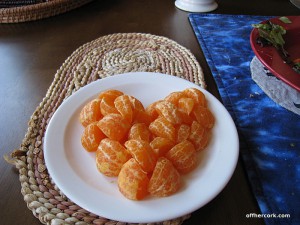 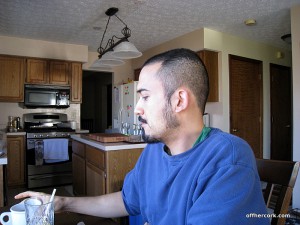 Back off ladies, this banana is all mine!

And sadly he doesn’t have any relatives of interest, he’s one of a kind.  Otherwise I would be putting my matchmaking skills to work.

After lunch it was time to hang out.  I read and worked for a bit, and Scott did the same.  The time change was throwing me off a little.  I can handle the morning, it’s the evening that kills me.  By 7pm, my body is already starting to wind down and be ready to call it quits for the night.  I want dinner and I want to relax.

Well by 6pm, my body was wondering why the heck we hadn’t eaten yet and good lord can we get some jammies up in this place already?!

I decided to just roll with it and be a rebel in the face of change.  I made dinner. 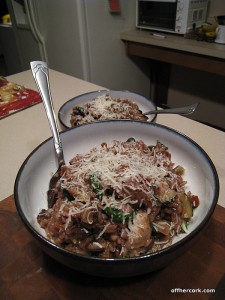 Red wine risotto!  Easy one pot meal, I was able to work this while chatting with my mom on the phone.  Risotto is beyond simple!  I love it so much that I’m going to do a post just on risotto.

This had loads of awesome stuff in it like spinach and zucchini.  It was very rich while also being warm and hardy.  LOVE!

Plus it’s topped with cheese, and the HQ staff loves their cheese.

We watched Saturday’s Pen’s game while we ate.  The game started off really badly but then Bylsma wised up and switched goalies early. If you don’t dig or couldn’t give two shakes about hockey, feel free to skip ahead to the next picture.

Last year, early on Fleury started going down hill fast in terms of his skill and ability as a goalie.  Scott and I called that out like in October.  Both of us, but more from me, wanted the backup goalie, Johnson to get more playing time.  He’s a great goalie and could have been even better if given more ice time.

This year, Fleury is basically nonexistent and Johnson has been getting way more ice time proving that he is also a top-notch goalie.  I LOVE it!  Because he’s fab.

He’s my new favorite player because my previous fav, Eaton, moved to another team.  I picked Johnson because I’ve supported him since he was signed on for the Pens.

I haven’t jumped on any bandwagon and I pick my faves because they can PLAY and know how to do their job.  Not because they are pretty or are a “super star”.

Laugh all you want, but Johnson Time is a Good Time! 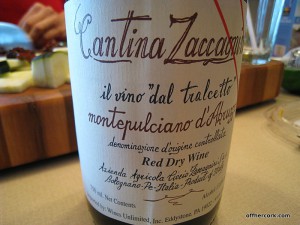 Wine of the evening was a dry red blend by Cantina Zaccagnini.  I also used this in the risotto.  It was alright.  Not the best red but certainly not the worst.  It was decent enough for sipping while sitting on the couch yelling at the TV.

My bedtime snack was a few pieces of toffee and then I was crashing hard.  By 10pm I had to call it quits and hit the hay!  I zonked out fast!

How was your weekend?  Did you have trouble adjusting to the time change? Do you wish the Government would just pick a time and stick with it already?

This post was part of OHC’s Homespun Sunday Series.

2 thoughts on “Feed Me, Seymour”