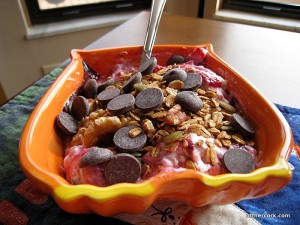 Hi gang!  How is everyone doing?  How was your weekend and did you do anything fun for Halloween?

Admittedly our weekend went by way too quickly!  We had to make up for last weekend which if you remember was full of crazy and drama.  This weekend we had chores to get done and be responsible adults.   Saturday was a “work” day.  I had blog stuff to get done (because I consider that work and not just a hobby) and Scott had freelance projects to work on.

That is how the majority of our Saturday was spent, doing that and avoiding political phone calls.

Seriously is the political stuff a lot more aggressive this year or what?!

Yesterday I got up early and had a lovely “short” long run of 8 miles.  I just felt like staying closer to home and didn’t really want to venture out.  It was awesome and I’m so glad to be running just to run again and not have something looming over me.  I’m totally not a goal orientated runner.  More on that at another time!  I realize I keep saying that but well, it’s true. All of these things I want to talk about in their own post!

Yesterday’s run was so chilly and fantastic! I am a full on cold-weather runner.  GIMMIE! It was so chilly yesterday that I had to wear a hoodie and my toboggan (toboggan = winter hat).  I was a happy happy girl!

Once home and showered, I had my yogurt snackie.

YUM!  Since it was Sunday Scott made us some peppermint coffee which was so good!  We picked it up at Harry and David.  It doesn’t have an overpowering peppermint taste but it’s enough to let you know that it’s there.  The smell of it brewing though is amazing and fills the whole house with a holiday smell!

A little after Scott got up,  I headed into the kitchen to make Sunday Breakfast.  All I had on the brain was pancakes with some buckwheat flour! 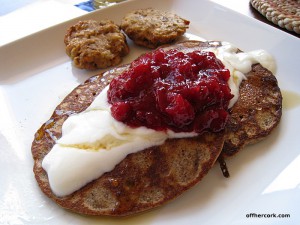 Handsdown buckwheat pancakes are my favorite!  They are light but still have a great nutty and whole grain taste to them.  I also love using cider to make pancakes!  The best liquid to use for pancakes in my opinion. 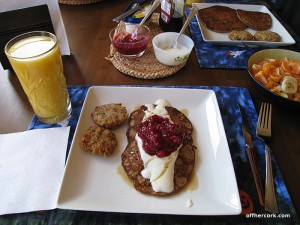 I topped my pancakes with:

Uh, I like my pancakes loaded up!  Maple syrup is nice but adding yogurt takes it to a whole other level making the pancakes more filling.  We had turkey sausage (local) on the side along with some clementines and bananas.

As much as I miss summer fruit, I’m really happy that clementines are back in season!  I love those little guys!

Our Halloween celebration was really low-key.  I got some cute placemats at Big Lots (or Odd Lots to some). 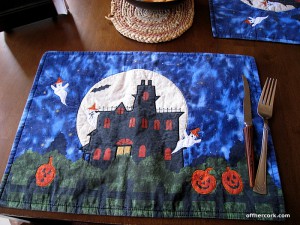 Cute!  I used to go all out for us on Halloween.  No one we knew had a party nor did anyone like to dress up.  So I use to make us a party just for two!  I would kick Scott out of the house and spend the day decorating and cooking.  I would text him that he could come home and then he had to go straight upstairs to put his costume on.

Our costumes were always easy comfortable things made from stuff we already had or stuff bought on the cheap from Target.  Then we would have dinner which was lots of yummy stuff all made to look odd and with “creepy” names.

This year that didn’t happen though.  I would say that Halloween snuck up on us but really we have just been so busy with stuff that I didn’t even have a moment to think twice about it.

I did stuff around the house yesterday and helped Scott a bit with garage things.  The garage got a big overhaul yesterday as it needed cleaned out and organized.  I helped where I could then the rest was left to Scott who spent the rest of the day fixing it up.

After breakfast, the next time I sat down and got a chance to hang out with him was after 8pm when we had dinner! :o 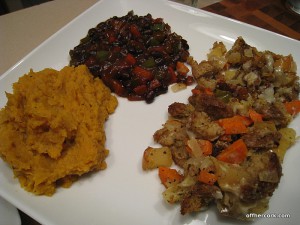 We are meatless in the house because I haven’t had a chance to restock the freezer from the previous debacle.  That’s alright thought because it game me a chance to test out some new recipes.

I made an easy BBQ black bean dish.  I made the beans myself, added in some sauteed onion with red and green pepper and added some bottled BBQ sauce to that.  I’m still trying to perfect my bean cooking.  I soaked these for over 24 hours and they still had a really hard outer shell to them even though the inside was fully cooked.  I have no idea how to get soft creamy beans!

We also had mashed sweet potatoes and apple stuff.  Mmmm!  I was trying out a new stuffing idea for Thanksgiving and I think this is totally going to work!

We watched Halloween while eating dinner and finished the movie while sipping wine on the couch. 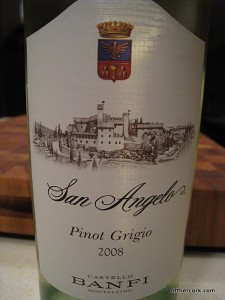 Wine for the evening was a San Angelo Pinot Grigio.  It was alright, not really as dry or crisp as I would have liked.  Not a bad wine but no definite flavor or punch to it.

We started watching a behind the scenes type show on Halloween (the movie) but I had to cut that short and hit the hay.  I was zonked out!

9 thoughts on “A relaxing kind of spooky”