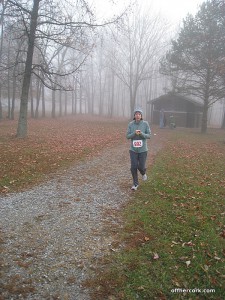 It was Thursday of last week that I learned about the Muddy Feet trail race that was happening on Saturday.  I was talking on Twitter about trail running and about another race I have planned for next month.  My twitter friend, Emily, said that she didn’t think the race was a trail race per say but just went around the perimeter of the park.

Well that’s kind of a bummer, right?  She said she and her husband were running the Muddy Feet trail run on Saturday and it was on an actual trail.

I totally signed up.

We are lucky here in Columbus because we not only have a thriving bustling city but we also have parks and water very close by.  This race was taking place at Alum Creek and there were two distances to pick from,  4.5 miles or 6.5 miles.

You know which one I picked.

Scott and I were determined to not be a hot mess for this race and we almost succeeded!  I totally forgot something which I’ll mention soon.

Saturday was an extremely foggy morning with a weather advisory out for most of the morning.  It was the densest fog I have seen so far during my time here in Ohio.

We arrived early and used the bathroom which you can see behind me in the first picture.  Basically the bathroom is a fancy outhouse.  Three stalls, no lights, and a smell to knock you on your ass.  It was a bit chilly and since I had 1/2 an hour before the race started we went back to the car to sit. 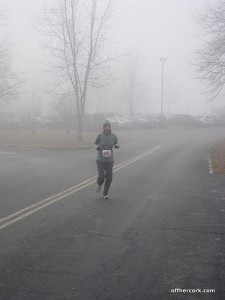 About 15 minutes till start time I headed back to the bathroom and discovered that if you used the stall closest to the door, the smell wasn’t so bad thanks to fresh air blowing in.  I also had to wrestle with my pants because the strings knotted up.  I did a quick warmup jog around the parking lot and then headed to the start.  Check out that fog! 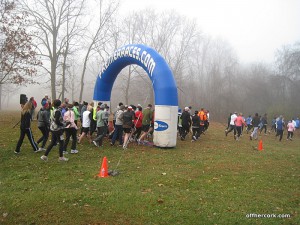 We were told that there would be two water stations but I didn’t hear the details on those.  The cap was 400 people for the race but I’m pretty sure there were not 400 people entered.  I don’t know how many people were there but it was a small race, probably the smallest I have run in so far.

It wasn’t long after we crossed the start and headed down the trail that I realized what I forgot, my watch!  Doh!  This meant I had no concept of time or pace at all during my run.

Emily said that it could be really muddy so I made sure to wear my old winter running pants and old grungy socks.  My shoes I didn’t worry about since I’m heading into winter, they are going to get snow and salt gunk on them anyway.

About 5 minutes or so in to the race, we circled back around past the start.  Scott and I didn’t think we’d see each other again so he headed back to the car already and I missed him.  I was a little bummed out but understood.  Plus if you weren’t running, it was really cold outside because the fog made things damp.

The trail run was great!  It was all grass trails with rolling hills sprinkled throughout.  It wasn’t as intense as the Buckeye Classic but still a challenging course.  Where Highbanks had trails that were gravel and dirt and packed earth, Alum creek was straight grass trails.  However there were leaves everywhere making things slippery if you didn’t pay attention.  There were also lots of tree roots and branches to watch out for.  There were drain pipes, dips, and holes to jump over, and big tire grooves that made it impossible to get even footing.

You were constantly watching your balance, making sure you didn’t slip or tumble downhill, and pushing yourself up the hills.  The trail was pretty wide so there was no worries about feeling squished.

I felt like I was running really slowly but the upside to trail running is that pace doesn’t matter because you are dealing with so many other things, pace goes out the window.

I was behind two girls for the first half of the race.  The pace was decent and so I paced them until the first water station.  It was at the point where the 4.5ers split from the 6.5ers.  They were running the 4.5 and were gone at the split.  A lot of people were gone at the split actually.  After that point I was mostly running by myself.  There were two girls behind me and a fella in front of me but we were all spread pretty far apart.

Even though the start had been really cold, I got hot during the run!  OY! I unzipped my sweatshirt as much as I could.  My running bib was attached so I couldn’t take off the sweatshirt.  I pushed up my sleeves and eventually took off my gloves.  I had to carry those since I didn’t have anywhere to stash them.  That was annoying but what can you do?  Push on through!

Finally came up on the second water station and I asked what mile we were at.  He said it was about the 5.2 mile mark.  Whooo!  Not too much farther and I would have my second trail run of the season (my third in my running career) under my belt.

There were a few more hills and then a lovely long flat section in an open field.  As I circled back around into the woods a guy came running past telling me the finish was less than a quarter mile away. 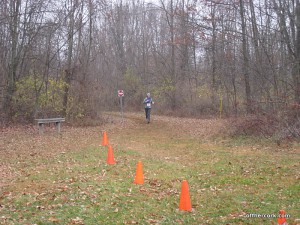 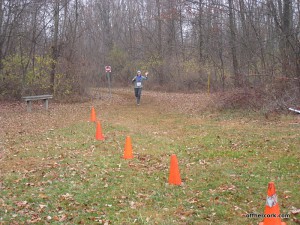 Then I spotted Scott and our friends, Emily and Jim standing on the sidelines. 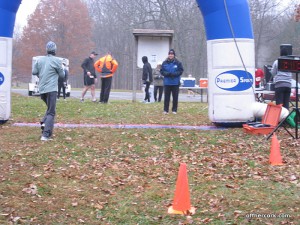 When I spotted my finish time you could have knocked me over with a feather.  6.5 trail miles completed in 1:10, hell yeah!

Then I got more surprises once I crossed the finish line. 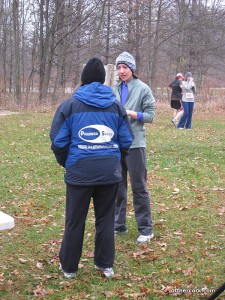 The person congratulating me at the finish was actually a Daily Mile friend, Rebecca!  We even live in the same town but haven’t had a chance to meet before now.  She works for Premier races on the weekends doing the time.  Nice, right?

Or course she caught me right at the finish so it took my brain a second to realize that I was having a conversation.  Ha!

My surprises weren’t finished yet!  She told me I won a prize!

I placed third in my age group.  Whoooo!  That’s my first ever prize I won at a race! 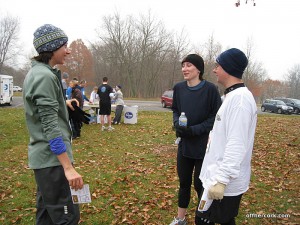 I walked over to where everyone was standing and chatted with them for a bit.  Emily and Jim are Twitter friends turn real-life friends and the bonus is that they are runners too!

We were all getting cold and headed off back to our cars to get back home. 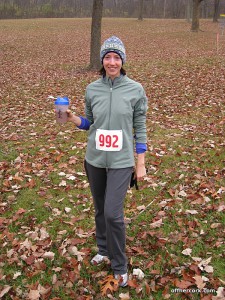 No medal for this race so you get a picture of me with my chocolate soymilk in my snazzy JayRobb travel bottle that I won from Kim’s site.

If you’re looking to get into trail running or want to try out a race to see if you like it, I highly recommend running Muddy Feet.  Not only do you get to choose your distance but the trail is great for an intro into trail running.

Will I run it again?  For sure!