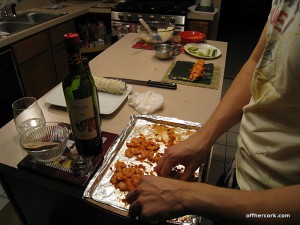 Friday nights are lovingly referred to as Sushi Friday here at the HQ.  I think we’ve talked about this before?  Just like Pizza Thursdays (which is today, whooo!) we very much look forward to it.  We don’t always have sushi though, sometimes we have leftovers.  Sometimes we are out with friends, and sometimes it just doesn’t happen.  Most times we try to make it work.

Sometimes we make sushi at home and sometimes we get some takeout to bring home.  Either way, we’re eating sushi in our jammies and watching something on TV.

One Friday I really wanted sushi.  Not just any sushi but our sushi.  Let me clarify that our sushi isn’t great or the most magical thing to exist.  Nor do I think it can compete with any kind of sushi that can be purchased at an official sushi joint. It’s just our basic at-home sushi.

What I really like about our sushi is the shrimp roll we, or I should say, Scott makes.  It’s so simple but mighty tasty and I cannot find anything else like it around.

I thaw some shrimp and remove the shell.  Then in a bowl I toss the shrimp with some soy sauce and hot chili garlic sauce.  You know the sauce, big red jar of it usually found in the Asian food aisles.  Then I roast the shrimp for just a few minutes.

This is what I crave.  It’s a spicy shrimp roll without all the mayo gunk on it.  It’s simple and it’s tasty.  I wanted this so so bad! 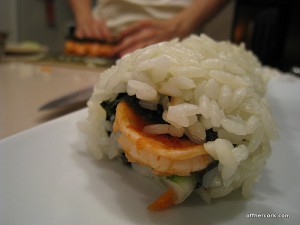 The trouble was that it was late and I didn’t have any of the ingredients prepped.  I like to do this ahead of time with as many ingredients as I can so it saves time when we are actually making the rolls.  Making sushi at home is great but it does take some time and can create a mess in the kitchen.  I didn’t really want to do all that at 7pm in the evening.

But I really wanted that shrimp roll!  And I also didn’t want to spend money on sushi when I knew, while it might be tasty, wouldn’t be exactly what I wanted.

I decided that, yes, we should take the time to make our own sushi.  Perhaps it will take a bit longer and perhaps the kitchen would be messier than I want for a Friday night, but in the end both of us would be more satisfied with the outcome. 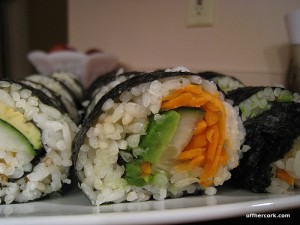 Scott and I have our tasks, I make the veggie rolls and he makes the shrimp rolls.  He’s also the only one skilled enough to make the roll with the rice on the outside.

With out plates loaded up, we sat down in the TV room, in our jammies and had a great dinner.  In the end, I was very happy that we took the time to make this ourselves.  We enjoyed dinner a lot more because not only was this exactly what we wanted, but there’s the satisfaction in knowing that you made it yourself.

The extra time is totally worth it!

Do you make a lot of food at home?  Do you have any weeknight traditions?

9 thoughts on “Taking the time”