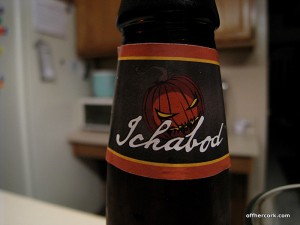 I have to be honest with you and tell you that when I saw this beer, I was beyond excited.  Like over the top EXCITED!

See, New Holland happens to be one of my favorite breweries.  They are responsible for bringing me to the dark side with a seasonal brew of theirs called Cabin Fever.  I talked about it right here.

They also make another dark beer that is my current LOVE and I was introduced to him earlier this year at Columbus Beer Fest.  More on him at another time!

So when I saw that New Holland made their own pumpkin ale complete with a cool name and an even cooler label I was all over that right quick.

Oh I had high hopes for this one!  I was building it up in my mind and I don’t know if this was a bad thing or a good thing?  But I was counting down the days till I could pour some and get sipping.

Alright New Holland, are you going to bring it or is your Ichabod going to be full of Ick and no bod? 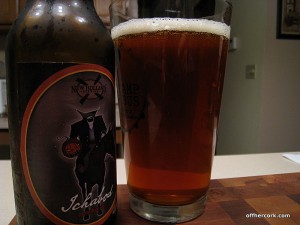 Opened this bottle and got nothing.  I mean NOTHING.  It didn’t smell like anything.  It had a beer smell but there was nothing there that made me think fall or pumpkin. Oh New Holland, you need to bring something to the table!

Color is fantastic!  This is exactly the color of ale I prefer.   A lovely deep amber color that you can barely see through. It was gorgeous and had me thinking that perhaps the lack of spice smell would somehow work out.

Head retention wasn’t great but it lasted a lot longer than some others we tried.  I would prefer a little longer but I can live with it.

Oh man could I have been any more disappointed?  I highly doubt it.  This beer just did not have it at all.  No spice, no flavor, and really no anything.  If I was given this beer in a blind taste test, I wouldn’t even have thought for a second it was a pumpkin ale.  It had a weird transition too, like it almost got super bitter at the finish.  Neither Scott nor I could even finish this beer.  I was so bummed out! I’m currently trying to figure out who I can pawn the rest on to.  Anyone want to do a beer swap?

It’s alright I still love New Holland, I just think our relationship is going to have to stick with the darker more intense stuff.

Have you ever had Ichabod ale before?  What are your thoughts?