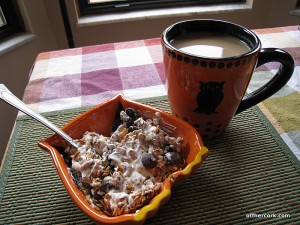 Hi gang!  How did everybody’s weekend go?  Ours went by way too quickly!  Both of us had work to get done and our weekend was slated as a work weekend.  While I was able to get some things accomplished on Saturday, Scott on the other hand was busy with house related issues.  Oh the joys of home ownership!  Our downstairs toilet had been leaking for quite some time.  Leaking on the inside not on the outside.

Then on Wednesday, I went to flush and broke the handle.

Scott spent the entire weekend fixing and replacing everything in the tank in order to get it to stop leaking and start flushing again.  This is after he spent time earlier in the week fixing up my washer that decided to be a drama queen.

And finally yesterday he had to tie down some siding that decided to come loose but not completely fall off allowing it to just blow in the breeze.

Uh, when it rains it pours.

Oh and it did that too yesterday!  I completed my long run in the most miserable conditions but I don’t want to dwell on the negative.  The positive is that I got it done and what kept me going (other than thinking of my half in two weeks) was thinking of taking the hottest of showers!  After stretching and getting dinner in the crockpot, I sprinted upstairs to my steaming hot shower.  Scott was up by this point which was very early for him!  While I thought that I would jump right into making Sunday Breakfast, I realized that I actually wanted to sit down on the couch for a minute, drink a strong mug of coffee, and feed my belly a snack.

After 12 miles, it was yelling at me and naturally I obliged with my favorite post-run fuel:

YUM!  I inhaled this while watching some Food TV which is still a guilty pleasure of mine no matter how much I complain about it.  I also talked with Scott about how to best plan out our day.  Then since my belly was growling, I got up to make breakfast. 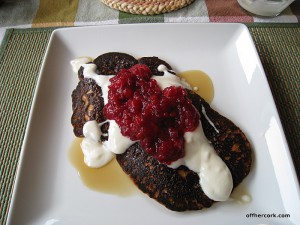 Seriously I am in love with this picture.  It actually makes me want to have breakfast all over again!  I made some pumpkin pancakes (recipe to come since it’s Pumpkin Month!) and totally topped those bad boys with:

After the picture, I also put two pieces of chicken sausage on my plate.  No matter how hard I try, sausage is just not photogenic.  At. All.

Scott and I cleaned up the kitchen and then we got busy with our respective tasks.  Sadly his was all about the toilet.

I tried to organize my iPhone contacts list and resulted in a huge fail.  Do any of you have iPhones?  I want to create groups in my contacts list so that I can lump people into categories but I can’t seem to do that.  Is that possible or something that iPhone doesn’t support?

Dinner was cooking away all day long and it smelled so amazing it was ridiculous.  Since yesterday was all gloomy, rainy, and dreary, it was the perfect time to bust out the crockpot.  I added in some lovely country style pork ribs and let it simmer all day long. 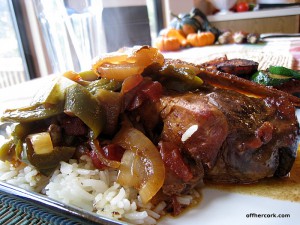 I had bone-in ribs that I put in the crockpot with:

If you’re curious as to what country style pork ribs are, they are a meatier cut of pork and actually not ribs at all!  They are cuts from the blade end of the loin closest to the shoulder.  Why they are called ribs I do not know, other than possibly from their “rib” like shape.  They are very meaty and do well with slow cooking, like in a crockpot or braising in a dutch oven.  They also would be great to use to create shredded pork BBQ or for pork tacos.  If you see them the next time you are looking for pork cuts, give them a try! 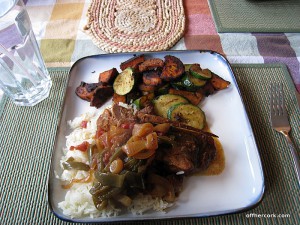 Ribs and sauce were placed on top of some jasmine rice and we had sauteed sweet potato and zucchini on the side.  Can you believe this was my first time sautteeing sweet potato?!  Normally I roast the pieces, or bake a whole potato.  I like the sauteed version!  Although it does take a bit longer to cook.

Wine for the evening was leftovers from already open bottles from earlier in the week.  And my dessert was a HUGE bowl of coconut ice cream which was delicious!  We watched Holmes and his new show after that, Holmes Inspection.  I have to say that I was  not surprised that people were mislead on inspections they had done.  Inspectors can be just as corrupt as contractors.  As home buyers it is our responsibility to be there during a home inspection and to make note of anything that catches our eye that the inspector doesn’t mention.  It’s also our responsibility to ask questions.  Homes are expensive, probably the biggest purchase we will make in our lifetimes (no matter if it is your first home, or your fifth), we need to look out for ourselves.

I was exhausted yesterday and hit the hay shortly after that.

So tell me how your weekend was and what yumtasatic foods you created and got to eat!