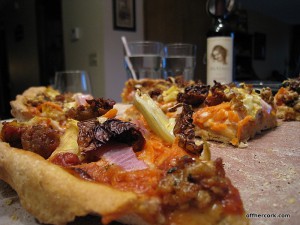 Hi gang!  How is everyone’s week going?  Scott and I have been slammed!  I know I keep saying this week after week, but seriously, each week keeps getting crazier. :o  I’m a little stressed over stuff right now because I have so much going on.  I’m starting to have anxiety dreams, do you get those?  My most common ones are that I’m in high school and can’t find my locker.  EVER.  If for some magical reason I make to my locker, there’s a lock on it and I don’t know the combination. FYI, in real life I never had a lock on my lockers and our lockers were not the ones with locks built in.  So you can see why this would stress me out!

Next one is that I’m driving and the brakes aren’t working properly.  I have to put all my weight onto the brake and hope that the car finally slows down so that I don’t hit the person in front of me.

I’m also battling a small cold-type thing.  Monday evening I felt a little off and by Tuesday I totally felt like butt.  Wednesday I was okay and by yesterday evening I was exhausted and not feeling well again.

I haven’t talked about it too much but I’m running the Columbus Marathon next weekend and I really don’t have time to be sick!  For the record, I’m running the half and not the full (originally I typed that “fool”  HA!).  I’m a half girl and not a marathon girl just so we’re all on the same page.

Anyway let’s talk pizza!  Dough turned out fabs yesterday and so did the pizza. 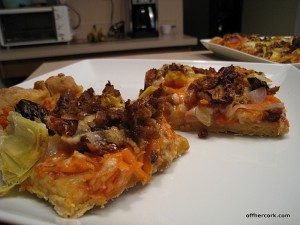 Yum!  The sundried tomatoes didn’t burn or get crispy this time around because I soaked them in hot water first.  That helped so much!  They plumped up and got even sweeter.  A few pieces had some crispy dark edges but nothing catastrophic.

The Italian sausage is actually sausage that was made during a sausage making class that Scott and I attended.  Lots more on that topic in the future!  It added a nice touch to the pizza and it’s all from local sources and it was homemade, can’t beat that! 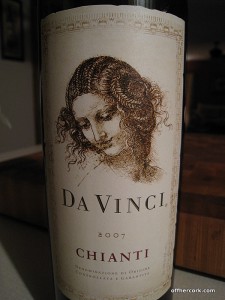 Wine of the evening was one of our favorites, Da Vinci Chianti!  It’s a lovely deep red with a pretty intense dryness at the end (to us).

Okay gang here’s the deal, it is now officially HOCKEY season!  Which means instead of me talking about Roadshow, I’ll probably talk about hockey instead.

I’m also pretty sure this will bore you.

Last night was the first Pens game of the season (not counting preseason games) and they played in their brand spanking new arena!  Too bad the game was horrible and they lost.  Okay, the game wasn’t that bad but they really seemed to be scrambling and not really quite sure what they were doing.  Gah!  Next game is tomorrow!

Alright, time to publish.  Tell me how you’ve been doing this week!