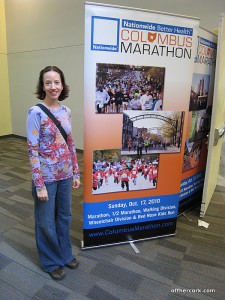 When I found out that there was an actual race expo attached to the Columbus Marathon, I become very excited!  To me this proved that this race was a biggie and I had such great expectations heading into the expo.

Admittedly, all previous races that I have raced, the race packets have been nothing worth noting. They came with the bib, course map if you’re lucky, and maybe a coupon to someplace.  Typically it just contained ads though.

My success rate with race shirts is not stellar.  One I didn’t get because they didn’t have my size.  They said they would mail it out to me but once I saw how ugly it was (for real, it was the color of dirty dish water), I kindly passed.

Most of them are men’s sizes (because we know women don’t run races right?) so they don’t fit me anyway.  I give those to Scott.

I finally got one that was a nice blue color but wearing it for anything longer than a short run isn’t a good idea.  But still, a race shirt for me! YaY!

All that to say, since this race had it’s very own expo I assumed a lot of things about the situation.

This was my very first running expo EVER!  Seeing so many other bloggers talk about expos had me drooling to finally get a chance to attend one myself.  How could I not get excited when I saw what all these other bloggers have gotten not just in their packets but also got a chance to see at the expo?

When the time finally came to head over to pick up my packet I was practically skipping the entire way!

In complete honesty, I have to say that my excitement bubble got busted pretty much as soon as I walked in the door.

The first section I hit was a huge set up from Second Sole who not only were selling running gear but also gear that had Columbus Marathon Logo on it, which I thought was pretty cool.  I was looking at the women’s gear and it was nice but nothing that really caught my eye.  Then I saw sweatshirts with 13.1 on them and had to have one of those!  They were all men’s though, which I found a bit odd.  Maybe it’s because I was there late on day two of the expo, that most of the selection was picked over?

I set aside the sweatshirt I was going to purchase and walked through the rest of the expo which took us, maybe 10 minutes?

I stopped at another running gear booth because they had some really nice things out.  Sadly nothing in my size.  Bummer!  I turned around a say a huge wall of 26.2 gear but no 13.1.

Continued walking and saw a two booths that had funny shirts.  One booth was One More Mile.  There was a shirt I wanted but again couldn’t find it in the style I was looking for.  Then another booth but it either focused on 26.2 or being a mom runner.

I’m neither of those things.

I got to the end and picked up my race packet which had nothing.  I had to look through it like twice just to make sure.  Just some ads for other races like Disney (because Disney doesn’t get nearly enough hype as it is) and a coupon for Cap City (that was nice!).  I headed over to show my bib for t-shirt pickup and was handed a bright pink technical tee.

The fellas?  Oh they got blue.  The marathoners?  Oh they got sleek black.  Us halfers that just happen to be girls?  Pink!  Because all girls just love pink, you know.

We walked back through the expo and found some cold weather gear for Scott.  Then I got my sweatshirt and we met up with Heather quick.

Then we were outties and off to run other errands for the day.

I walked away really disappointed.  Not only was there basically nothing going on, the half marathon seemed like it didn’t even exist.  Everyone and everything was focused on the full.  Hey, I get it, running a marathon is a big deal but running a half isn’t small potatoes.  13.1 miles is a long way too.

I realize how much of a Negative Nancy I sound but maybe my expectations were too high?  I just thought for as big as this race was and the fact that it is also a Boston Qualifying race, that this expo would be rocking.  I expected to be overwhelmed with stuff as opposed to being underwhelmed and a little frustrated.

A girl can dream right?