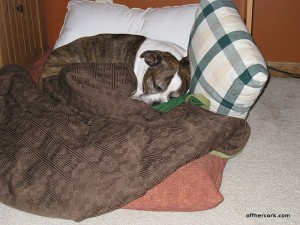 When we were on the ride home this past Saturday, our thoughts turned to:

When we walked in the house, both of us noticed an odd smell.  It smelled like something had turned.  I thought it was the garbage disposal so I put some baking soda in it and got it taken care of.  I finished putting things away, and headed down to the basement to put the cooler away.  I noticed the smell had gotten stronger in the basement.  When I made it down, I finally saw what the problem was.

We have a standup freezer in our basement.  We purchase meats, veggies, and fruit in bulk.  Not only our food, but also Rocky’s food in bulk (he eats a fresh foods diet, not kibble).  Apparently the freezer door wasn’t closed properly and it opened up while we were gone.  Everything thawed and leaked all over the freezer and then the basement floor.  Our house smelled like rotting meat and fish.

It took us a long time to get that cleaned up.

We both showered and finally ate “lunch” around 4pm.  Rocky had eaten his dinner right before us.  It wasn’t long after that I noticed him acting funny.  He was acting like he was going to throw up, which that really isn’t odd.  Rocky throws up sometimes, no biggie.  This was different though, he was uncomfortable.  He would lay down, then sit up, then lay down, then walk around.  Rinse, repeat.  I felt his stomach and it was all tense and pulled up tight against himself.

All of these are signs of bloat which isn’t something you can wait around on to see if it goes away.  Bloat needs to be addressed ASAP.  Bloat can happen to any dog but is more prone to happen to larger dogs and dogs with big chest areas, like boxers, dobies, and great danes for example.

Thankfully we have a great ER Animal Hospital close by.  We tossed on some clothes and headed over right away.

The rest of the evening was spent at the ER vet.  Rocky did not have bloat nor did he have food bloat (food bloat similar to us feeling bloated after eating too much or too fast).  He was fine even though his stomach was still pulled tight against him.  Rocky was discharged and we were headed home.

We still needed to eat dinner by that point.

I got Rocky comfortable, made a quick dinner with some frozen leftovers, and then headed to bed. 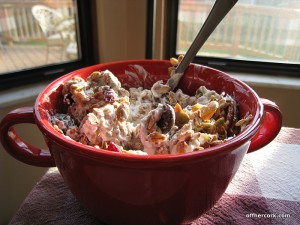 So yeah, Saturday was pretty much spent in drama land.  Come Sunday I wanted nothing to do with anything.  I really just wanted to stay in bed with my boys but alas, being an adult means that sometimes you have to do some stuff when you don’t want to.

No run Sunday morning because I was just plain wiped out.  All I wanted was sleep.  I was a bit bummed because my last run was the previous Tuesday!  I made myself some light breakfast, yogurt with granola and had a lovely cup of peppermint mocha coffee.  Tis the season!

The rest of the morning was spent getting caught up on emails and things like that.  Scott and I decided to have breakfast before heading to the grocery store. 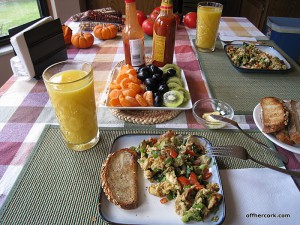 We had scrambled eggs with assorted veggies:

With some oatmeal bread toasted and dabbed with Irish butter!  OJ and some fruit to complete the Sunday Breakfast.

Then it was off to the grocery store to fight the crowds.  We got there later in the afternoon so that seemed to work in our favor a bit.  Whole Foods, while busy, wasn’t full on crazy.  However we stopped at The Anderson’s before that and it was full on mad house.

Note to self, no more Anderson’s on Sundays!

We purchased a few things and then headed back home.  It was really hard for me to spend money on food.  That might sound weird, but having lost all that food left me uneasy and unwilling to put out money for more.

The rest of Sunday we spent taking care of Rocky.  I prepped his foods and I prepped our dinner.  All I wanted was some major veg action.  We had veggies at my mom’s but we also had a great deal of meat, more than we usually eat.  I couldn’t eat anything animal! 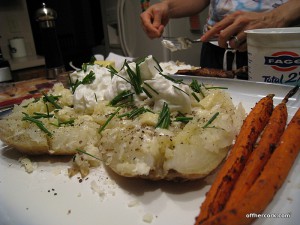 We had baked potatoes at my mom’s and I have been thinking of nothing else since then.  I bought us some HUGE baking potatoes so we could have some for dinner!  Our loaded potatoes had: 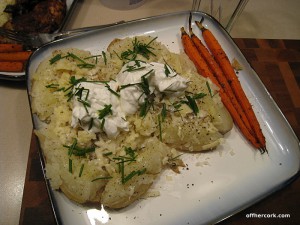 See?  The potato takes up most of a large dinner plate!  Don’t worry, I had more than three carrots.  It might not look like much but it was exactly what I wanted and hit the spot!  We ate and watched Dancing with the Stars. 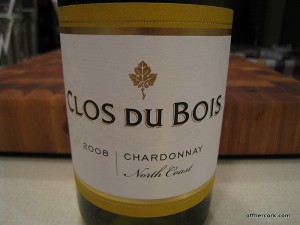 Wine for the evening was Clos Du Bois Chardonnay.  It was alright, sort of light for a chard.  It didn’t really have any kick or flavor at the end, just a light white with not much else going on.  I also had a big bowl of SO Delicious Ice Cream and then crashed in bed!

Today I’m still trying to get caught up on everything!

How was your weekend?  Please tell me it was a lot more relaxing than ours!

This post was part of Off Her Cork’s Homespun Sunday Series.