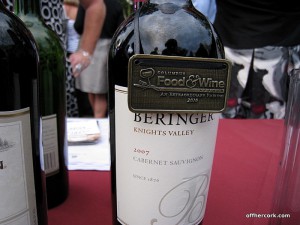 Scott and I are constantly learning more and more about Columbus and its fantastic food scene which makes me fall in love with Columbus a little more each day.  Many, I’m sure, would be surprised to learn that Columbus has a huge local foods scene.   As a newbie foodie and beginner local foods advocate, I am soaking up as much of the information and atmosphere that I can.

We learned about the Columbus Food and Wine Affair last year after the event already happened.  I stumbled upon a few recaps and then eventually the official website outlining what the event entailed and what the proceeds supported.  Scott and I were so bummed to have missed it and vowed that we would attend the following year.

Then it slipped our minds as the year went on but amazingly enough it came across my radar again.  We discussed whether or not to go and decided that it would definitely be an event that should not be missed.  I purchased tickets and could barely contain myself for the rest of the week.

In short, The Columbus Food and Wine Affair features local restaurants preparing some of their signature dishes along with many wine stations throughout where local wineries and local wine shops discuss wines while offering tastings.  The event is held at the Franklin Park Conservatory which is an 88 acre park in downtown Columbus that is a horticultural and educational institution.

Since Scott and I have only been to Franklin Park once before for an event, we took this as a chance to be able to see more of the grounds while experiencing some of Columbus’s best restaurants.  The tasting was from 6:30pm to 10:30pm and we arrived not knowing what to expect.

I was stunned and taken aback by how big the actual event was and how much there was to see and do. 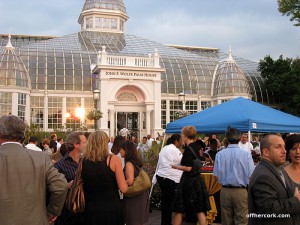 We walked to the entrance, provided our tickets, were greeted with a wine glass and cocktail plate.  Then we proceeded onto the main event and tried to gather our bearings and form a plan of action.  This was the first section that we started in.  Being right at the beginning it was a little bit busy with squishy conditions but we were able to make our way around to get some food samples. 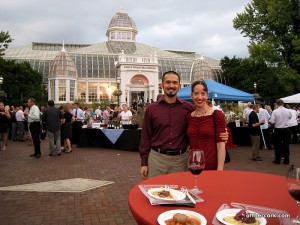 As I was snapping pictures of the food and of Scott, a lovely lady offered to take a picture of the both of us.

I’m going to do my best to show you some of the food that we nibbled on and who provided them.  Sadly, I can’t do the same for the wines because they were very hard to get pictures of and I didn’t want to hold up the line for the people waiting behind me. 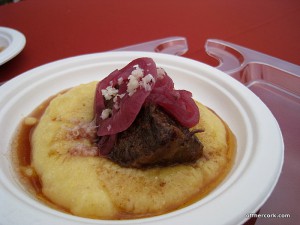 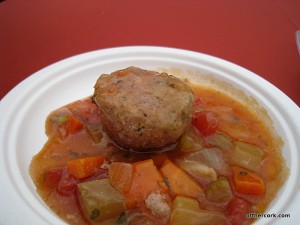 With both of these dishes Scott and I sipped on red wines, both of us each had a different variety of cab. 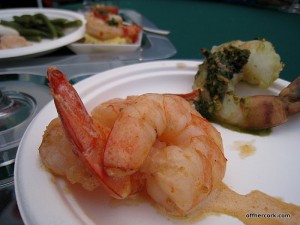 Two kinds of shrimp in this post, first is BBQ Shrimp from Ruth’s Chris and in the back is Basil Marinated Jumbo Prawns from Bel Lago. 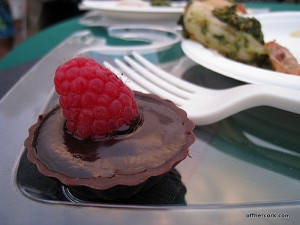 Ruth’s Chris also provided mini chocolate tarts that were rich and chocolaty. It melted on the tongue in a way that I can’t begin to describe.   I didn’t even share bites of this one! 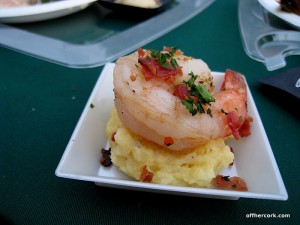 Believe it or not, when going to any sort of tasting event in Columbus, one of the most popular things to appear is a take on shrimp and grits.  This version was from G. Michael’s and the grits were so garlicky that it was fantastic! 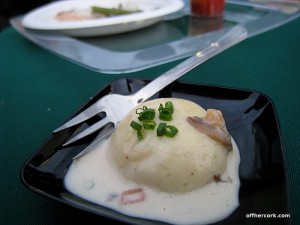 The Scallop Pomponette with sauce Bonne Femme from The Refectory.  Think along the lines of a scallop mousse. 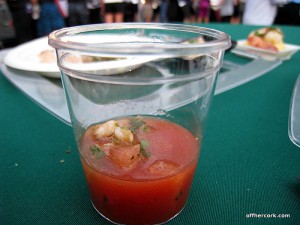 Tilapia, Scallops, and Shrimp Ceviche from Cantina Laredo.  I admit that I am not the biggest ceviche fan but this was amazing!  By far the best ceviche I’ve had to date. 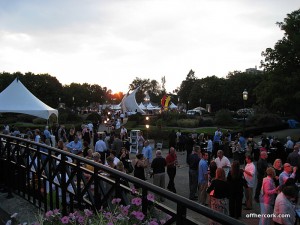 Then it was time for us to move down to the other tasting sections.  To give you an idea of how big this event actually was, the building that is behind us in the picture at the beginning also had food and various stations set up throughout its multiple levels and rooftop gardens.  Sadly we didn’t realize this until the very end as we were looking for restrooms and on our way home.  Then there were tastings just outside of the building (the Upper Terrace, where we started).  Then below that was the Lower Terrace.  Then farther down was the Grand Mallway (a large circular area) and then at the end (all the way to the very back of this picture), the Pergola.  The whole way lined with wine and food booths.

It is that big!

I never dreamed that Scott and I would be here for the entire evening but in fact we were.  It takes a while to get through all the tastings!  Since it was in the evening, and it was an overcast day, darkness started settling in quickly!  I took as many photos as I could when I had enough light but eventually it got to a point where I had to resign the camera to my purse. 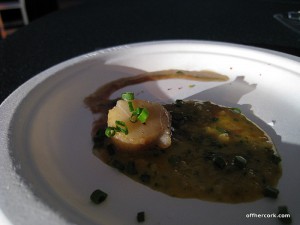 From Smith & Wollensky,  brown butter scallops on a sauteed leek and mushroom sauce. 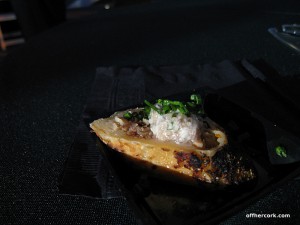 Basi had a smoked chicken strudel with a kind of cherry sauce on top. 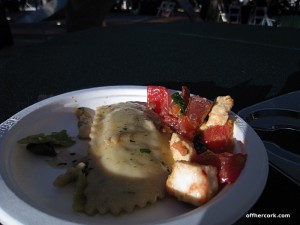 Marcella’s in The Short North had house made goat cheese ravioli with pancetta and mushroom sauce.  I’m still dreaming about this ravioli!  I did let Scott have a bite but not much!  Alongside of that is a heirloom tomato salad that I inhaled.

You can see by this point that it was completely dark outside and I took these pictures by snagging a table next to a spotlight!  That was the best I got though and the rest of the evening we walked around mingling and grabbing more nibbles.

More food of note that we tried:

And that’s not even everything!  There were lots of places that we ended up missing or not seeing at all.  Scott and I split each tasting otherwise that would be a heck of a lot of food for one person!  When there were veggies offered, I tried to get my hands on some.  Events like these are high in protein and low on veggies so I really appreciated those restaurants that offered up salads and fresh veggie dishes! 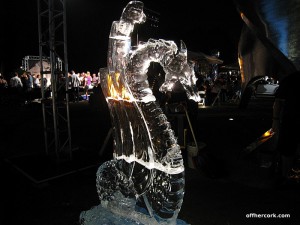 Along with food there were so many things to see and experience.  This was an ice sculpture in the shape of a dragon and it was gorgeous.  There were also dance performances and chef demonstrations from some of the local restaurants.

At the very end of the tasting was a huge section that was nothing but desserts from the Columbus Culinary Institute.  So many things!  I kept my selections small since I’m not a huge dessert fan.  The best thing I had was a chocolate chip and hazelnut cookie.  Warm, gooey, and perfect! 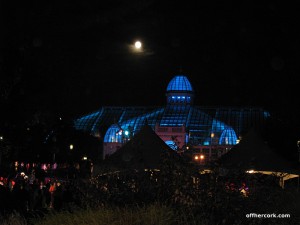 There was a full moon that night and with the building all lit up in blue, it made for a fantastic view as we sat and ate dessert.  We had such a great time and talked about how happy we were that we decided to attend the event.  We’re already looking forward to more!

Thank you to Columbus Food and Wine Affair for putting together an amazing event!