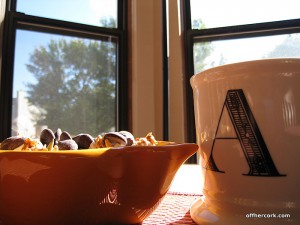 Hi gang!  Is everybody having a lovely holiday weekend? We are but it is going by way too quickly!  I have so much to get done this week in preparation for going to Atlanta this weekend.  YaY!  I’m excited but also have a feeling that it’s going to sneak up on me fast!

I got in a nice long run yesterday and the weather could not have been more perfect.  The sun was out and it was very chilly, in the 40s when I started.  I busted out 12 miles and felt a lovely satisfaction once it was done.  I know I won’t get a long run in this upcoming weekend, so I needed to make sure I got a decent one in while I could!

I never really got “hot” during the run.  I warmed up but it was chilly the entire time.  Taking a long HOT HOT HOT shower when I got back home almost might have felt better than the run itself.

Quick refueling with some yogurt and granola, can you see the chocolate chips peeking over at you?  Steaming hot coffee to wash everything down with.

I pulled another “unplug” session yesterday.  I didn’t write an exercise recap and didn’t do much of anything else online either.  While I was watching Food TV, Scott got up and I put the laptop away so that I could hang out with him.

After a while I heard his stomach growling and made my way to the kitchen for some lovely Sunday Breakfast.  I had some cider left over from the previous week, so I used that all throughout the day in each of our meals. 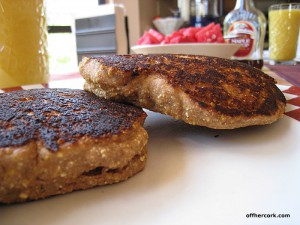 Cider corncakes!  Pancakes made with cornmeal and apple cider.  These were thick, fluffy, and amazing.  So tasty and perfect for the start of fall! 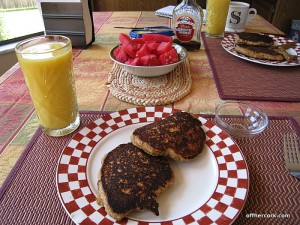 I put a bit of butter on top and dipped into maple syrup.  These were filling! I could only handle eating 1.5 of them.  Sadly the watermelon in the back was bad and I had to toss it.

I had some pineapple and we ate that instead.

After breakfast, I got some fab looking pork chops in a cider brine.  Mmmm!  Cider brines are probably my favorite, followed closely by a beer brine.

The rest of the day was spent lounging around and walking Rocky.  My legs were a bit sore from my run, so I wore my leg sleeves and stayed off them as much as possible.

The day flew by and we weren’t even doing anything!  I chatted with my mom and the next thing I knew it was time to feed Rocky and get started on our dinner.  We were originally going to grill but it was late by the time we started, so I nixed that idea.

I ended up making what turned out to be one of the best pork chops we’ve had!  Or at least, in my opinion anyway! 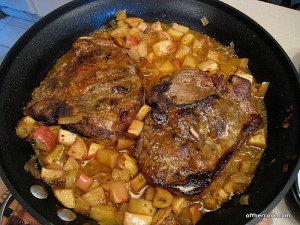 Pork chops with sauteed apples and onions with a cider reduction sauce.  These were bone-in chops and they were huge!  Easily a good inch and then some thick.  Amazing!  Locally raised and bought over at Bluescreek in North Market. 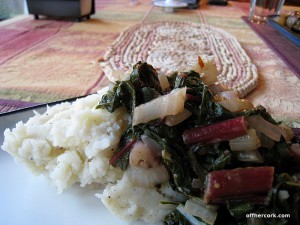 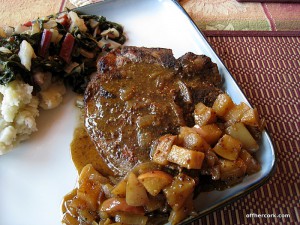 The pork chops are going to be an upcoming recipe!  I will tell you that everything was cooked in a skillet and the flavor is outstanding.  A great fall inspired dish and a nice twist on the chops & applesauce pairing. 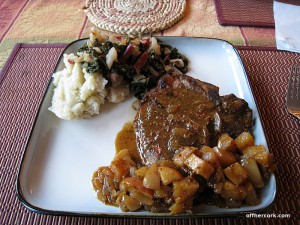 All together!  The chops were so huge that I couldn’t even eat my whole portion, and that’s after running 12 miles!  I had slightly less than half, these were big babies!  Scott made plenty of “nom nom” noises and deemed them fantastic.

I have to tell you that I am in love with square plates!  They have so much more surface area compared to round plates and they take up less space in the cabinets.  I bought some nice ones on sale at Target and also found some on clearance at Triple B (Bed, Bath, and Beyond).  I’m getting rid of all my other plates and making the switch to square.

Dare to be Square kids! 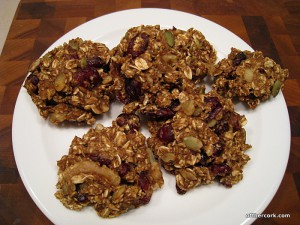 Dessert was some cranberry oatmeal cookies that also had walnuts and pumpkin seeds!  I did not make these with cider but I should have to keep the theme going. They were yummy little powerhouse cookies!  We watched Holmes times 2!

First we watched some Holmes on Homes which was a really horrible story of a family being taken advantage of by a contractor.  They had an existing house that they wanted to add a second story to and more room.  Holmes had to take the whole house down and now there is a whole in the ground because of the previous contractor’s lack of experience and how he structured the new additions.  Could you imagine having your house ripped down because it was made unsafe by a sketchy contractor?!  Scary!

Then we watched Sherlock Holmes!  An older one, in black and white with Basil Rathbone as Holmes.  I don’t know if I can watch the one with Robert Downy.  He’s not one of my faves and I have a super hard time watching anything with Jude Law in it.

After the movie I kicked it in bed because I was flat out exhausted.

Today sadly no more relaxing and it’s back to work for both of us.  But at least it’s a relaxing environment, no rushing around because we don’t have to be anywhere.  We can take our time getting things done.

This post was part of Homespun Sunday, if you’d like to join in, drop me a line!