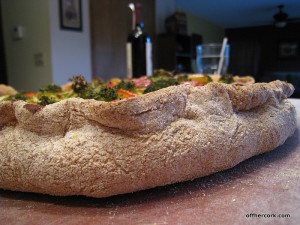 Hi gang! You know after last week’s pizza debacle that I needed to make some OHC style pizza STAT for this week! I was completely looking forward to it too!  The chew of a whole grain crust, the crisp flavor of fresh veggies, and the satisfaction of eating something homemade was calling my name.

I was a little worried about the crust this week because it seemed a little too fluffy while it was rising.  I was hoping and praying that it work out and that my pizza dreams would not be crushed.  Thankfully my fretting was all for not because the crust turned out amazing.  Not only did it taste fab but during baking it rose like crazy almost looking like I made some sort of deep dish pizza!

Mmmm deep dish pizza!  I have not made that for a while.  Perhaps I should reconsider it and give it another go!

This week’s pizza just had some very OHC style veggie toppings and it was soul soothing. 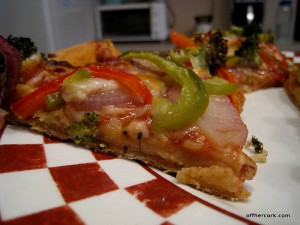 I had three lovely slices watching the best show for granny’s ever!  This week’s episode was crazy good gang!  Just about everything was worth a load of cash.  One lady brought in some framed needlepoint from the 1700s and it was worth $25-$30 thousand dollars.  Needlepoint is where it’s at kids.  I have yet to see any needlework come in that didn’t have a high price tag attached to it.  If you’ve got some, frame that bad boy up and get it insured! 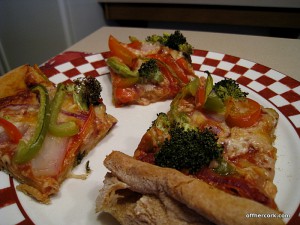 One girl brought in some statues and small figures carved out of walrus tusk that her great-grandfather had gotten during his travels.  One little figure was of a kneeling person, and it was tiny guys but it was worth like $8-$10 thousand dollars.  Crazy!

Love it!  But then I love old stuff so it fascinates me. 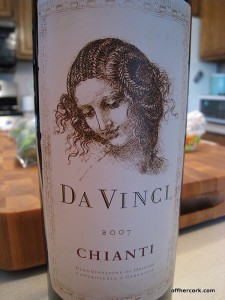 Wine for the evening was a Chianti by Da Vinci.  It’s one of our favorite reds and we haven’t had it for a long time.  It was on sale so I decided to pick some up!  Very yummy!

How do you guys feel about the pizza recaps?  Is it something that interests you at all? Just checking because while I love pizza, I also don’t want to post stuff that is uninteresting.