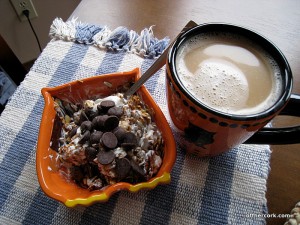 Hello my little OHCers!  How is your Monday going so far? Mine is going by way too fast!  I have a ton of stuff to do and it seems like I might not have much time to get it done.  Hopefully this week will not be as crazy busy as last week which will provide me with more time to get stuff done here.

I’m up to my eyeballs in projects and I love it! It is also making me realize several things:

My organizational and time management skills are actually pretty good but they can be better and I need to make them better!  But let’s talk about food shall we?

Yesterday was a glorious food day!  A day where all I wanted to do was stuff my face and get my grub on.  This may or may not have something to do with the fact that, to quote my friend Angela, “That’s what happens when you run a thousand miles.” Ha! :p

To be honest, I love the kind of days were I can stuff my face.  I am not afraid of food or eating. I love food.  More specifically, I love stuffing my face with real food that tastes fab and nourishes my body. Yesterday I did just that.

After my Thousander, I plopped down on the couch with my Bug (nickname for my netbook), Rocky, food, and my Zensha sleeves.  My food was some yogurt with homemade granola and chocolate chips.  Not too many chips this time!  Along with coffee on the side.  I couldn’t hold out any longer and busted out some of my fall dishes.  The coffee mug has a wee owl on the side of it and my yogurt bowl is in the shape of an owl.  He has eyeballs and a beak too, but the food covers that up.  The owl bowls I use all the time because they are just way too cute to only use during the fall months.  Both these items I got at Homegoods for el cheapie!

It wasn’t long after eating this little recovery meal that I was hungry for some real food in the form of pancakes.  Specifically pancakes the size of my two hands put together.  I use to make small pancakes, now I want the real deal!  Thankfully Scotty was up by this point so I could get moving on Sunday Breakfast. 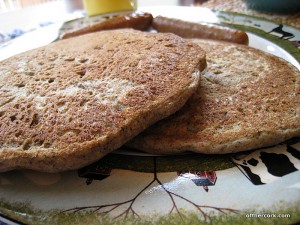 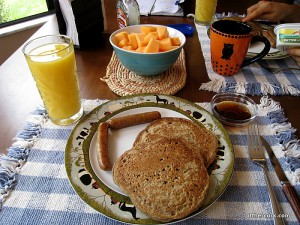 Two chicken sausages on the side, some OJ, and cantaloupe in the middle.  I buttered those johnnies up and dipped them in maple syrup.  Fantastic!

When it’s just Scott and I, I fully geek out on food.  I’ll take lots more pictures, make very loud “mmm mmm” sounds, and close my eyes.  Sometimes I’ll do a little happy dance in my seat and clap my hands.  Totally confessing to you all.

Scott and I didn’t do much of anything yesterday but chill out.  The week was rough in terms of being busy (as I’ve stated way too many times) and on Saturday we spent the whole day cleaning out our office trying to make it more functional and organized.  Sunday we needed to just chill, so we did.  We hung out and watched Triple D.

Um, then I was hungry again.  I had to get started on dinner because there was no way I would be able to make it until later in the evening.  On Sundays we usually eat dinner between 6:30 and 8pm.  Not planned, that’s just how it works out.  Yesterday?  I was prepping dinner by 4pm.

I’m totally in fall mode gang.  I made a HUGE crockpot of lentil chili on Saturday and yesterday we had some roast chicken breast with root veggies. 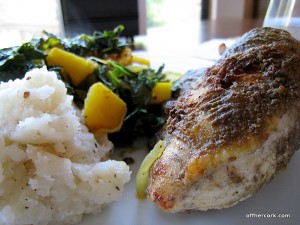 Local bone-in chicken breasts (buy bone-in gang! Totally so much better!) that I brushed with some olive oil and then put a simple rub on:

I know, that might sound like a weird combo but it’s amazing.  A little bit more olive oil and in the oven at 400 for about 45 minutes.

Poultry seasoning makes me think of fall which is exactly what I wanted. 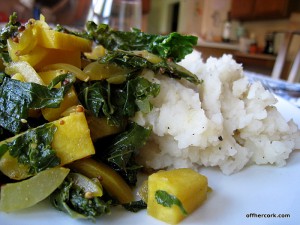 Last week, Scott and I went out to dinner and my veggies that came with my meal were sauteed chard on top of mashed potatoes.  It was easily the best combo of veggies I have ever had.  I thought, “I could make this and kick it up a notch.”  Which is exactly what I did for last night’s side dishes.

Mashed potatoes with sauteed kale and golden beets.  Recipe for that soon!

There was much squealing and chair dancing as I was eating this. 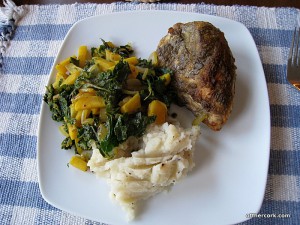 I was a proud member of the clean plate club last night. So so good!

After dinner, I chatted with my mom while Scott did some more office related stuff, then it was time for more couch sitting.  Holmes ended up being one we’ve seen several times and we decided to watch something on Netflix Streaming instead.  We picked The Tick, live action version.

There was of course snacking during the show. 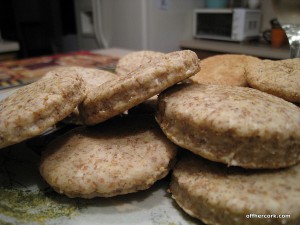 Coconut sugar cookies (vegan) along with some leftover wine.  YUMMY!

If you like silly humor then The Tick is for you!  It’s flipping hysterical and it’s a shame that Fox never picked it up after the first season.  Seriously could not stop laughing.  We have three shows left and I told Scott that we have to buy the DVD!

Let me know how your weekend was and what goodies you got a chance to create and eat!

This post was part of Homespun Sundays.  If you want to join in, just let me know!

7 thoughts on “Jumping the gun”