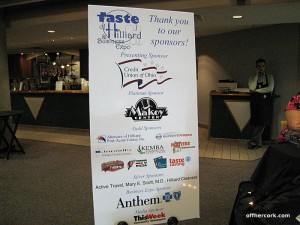 This past Tuesday was the First Annual Taste of Hilliard and Business Expo put together by The Hilliard Chamber of Commerce.  Local restaurants and businesses gathered in historic downtown Hilliard at The Makoy Center to show off their services and to give you just a bite of what is around your neighborhood.

There were so many vendors that both of the rooms at The Makoy Center were needed! Everything ranging from local taverns, to insurance companies, to golf courses, to breakfast spots.

Scott and I were running a little bit late so we didn’t get a chance to get in as early as we would have liked to chat with vendors but we were amongst the first to arrive at what is bound to develop into a great Hilliard event.

Attendees not only got to sample food and talk with business owners, but there were also loads of door prizes given out every half hour or so.  Fun all around!

We wandered around taking in all the sights and booths before making stops to pick up information or samples of food.  The set-up was such that food vendors lined the outside perimeter and business vendors were on the inside.  This was great because it gave you enough space to move around and not risk spilling food or drinks.

The first room we explored was The Emerald Room. 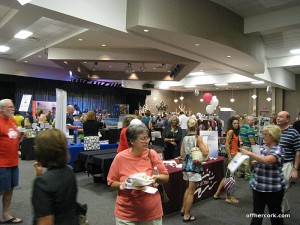 Lots of great information and samples here!  Being a food blogger, you know that was my main focus.  To save time, I’ll show you just a few of the many samples that were offered. 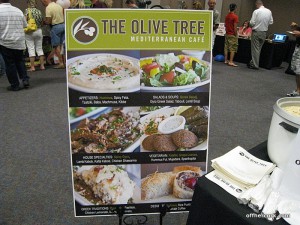 The Olive Tree Cafe was there with three samples from their menu. 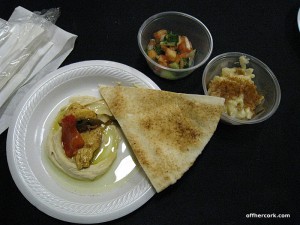 There was a chicken dish with peppers, hummus, and a warm pita triangle.  There was also Israeli salad, and warm rice pudding.  I thought the rice pudding was fantastic! Warm, creamy, and slightly sweet with little gems of golden raisins sprinkled throughout. 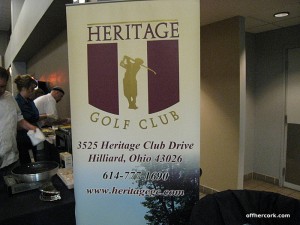 Heritage Golf Club were giving out samples but I’m not sure if these were from their catering menu or from The Grill Room menu.  The Grill Room being the restaurant attached to the clubhouse. 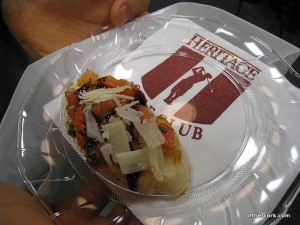 First up was an appetizer of bruschetta which had a layer of white sauce on the bread topped with marinaded tomatoes, shaved parm, and drizzled with balsamic.  It was good but had a lot of flavors going on at once sort of competing with each other.

The second dish was sautéed scallops with what I think might have been a lemon butter sauce and served atop creamed corn.  The scallops were perfectly cooked and the sauce had a powerful tart bite to it.  I loved the scallops and Scott really enjoyed the sauce on top. 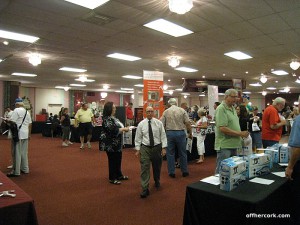 On to The Burgundy room! 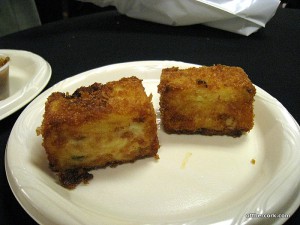 We came across a local Italian Bistro called Salvi’s.  We were handed some of the bite size Pasta Salvi to try.  It’s egg noodle lasagna with cream sauce, rolled in bread crumbs and then fried.  Sort of the Italian twist on fried mac ‘n cheese.  I think this was the judge’s favorite for appetizer that evening!

Then Scott and I spotted an establishment we have been to on a few occasions. 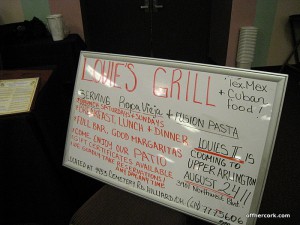 Louie’s Fusion Grill which focuses on putting together dishes with Mexican and Cuban influences.  They had two dishes they were serving up. 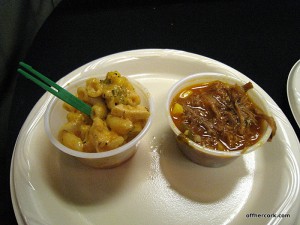 Something similar to a spicy mac ‘n cheese loaded down with chicken and sausage.  Next up was a beef brisket dish that was spicy and had some veggies mixed in with it as well.

Scott and I had a lovely time nibbling, checking out vendors, and talking with other attendees.  Inside sources tell me that there are talks of next year’s Taste already!  Lots of great feedback from the vendors and over 700 people attended.  That is an amazing turnout for a first time event! 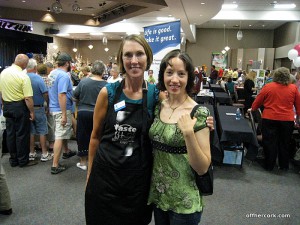 A big THANK YOU to Libby Gierach, President of The Hilliard Chamber of Commerce for putting together a fabulous event showcasing the great things that Hilliard has to offer its residents.

8 thoughts on “Event: Attending The Taste of Hilliard”