Hello my little athletes!  Did everybody have a great kickass week?

The weather here has sort of been out of control with the heat and humidity.  We’ve had heat advisories all week.  Even late in the day, and I’m talking like 2am here, it was still 80 degrees outside.  That’s humidity for ya!

Monday I pulled out the Jackie Warner DVD again to give it a shot.  Instead of doing the whole routine, I decided to break it up and do it in 15 minute increments.  I did lower body, then upper body, and finally abs.  I liked this a lot better!  I like concentrating on one area and then moving on to something else.  It’s satisfying knowing that you completed one section already and seems to make the workout go a lot faster.  The workout kicked my hiney!

Tuesday I cranked out 6 miles.  Even with the heat, if I’m doing that distance, I do not have to take water with me.  I will set water out in my driveway so that if I need to make a pit stop, I can.  Sometimes the heat is a bit much and I do have to make a quickie stop and sometimes I can manage.  Tuesday I was able to crank out 6 without having to stop but I did drink down my water when I got back to the driveway!

Wednesday the humidity was even worse if you can believe that!  This time I did have to make a stop after 3.5 miles to take a quick drink of water.  I had thought about going a bit farther but it wasn’t happening.  Too hot!  However by the time I took Rocky out for his walk which is right after my run, the sun was out but the humidity was decreased by a great deal.  Gee thanks weather!

Thursday I had a crap run that turned glorious.  The weather was awesome and the humidity broke for a little bit which made for at least a pleasant run weather-wise.  Mentally however, I was one crankah runner!  I was tired, I was bored with my runs, and the thought of pumping out 8 miles was not appealing to me.

My original schedule that I made for myself puts speed work on Wednesdays and a semi-long run on Thursdays.  I do a ton of stuff on Thursdays around the house (cleaning, food prep and so on) plus then I have Muay Thai conditioning class in the evenings.  It’s a big day!  Then it occurred to me, why in the world did I schedule a long run on Thursdays?  I have way more time on Wednesdays, so I should do it then.  Leaving me Thursdays for a short speed run thus providing me with more time in the mornings to get stuff done around the house.

I changed tactics, picked up my pace and did a nice 4 mile run on Thursday.  Average pace wasn’t super speedy since I was being a pain to myself and didn’t pick up the pace till I have half way through.

Conditioning class that night was a rough one.  Both of my martial arts schools are in sort of like warehouse buildings.  No air unless you open the big bay/garage door to get air moving.  So you can imagine how hot of a workout that makes.  I was dripping sweat during class on Thursday and the heat zapped my energy.  Whew!

Friday and Saturday were rest days.  Saturday was an unintentional rest day and I was mad at myself for it for a short time but got over it.  I slept like crap which caused me to sleep in till 10am.  Yikes!  I thought we were going to do yard work so I didn’t worry about getting a DVD done.  However it was seriously hot and humid yesterday and doing yard work was out of the question.  We spent some time moving an old huge TV from upstairs to the basement and I’m calling that an arm and core workout. :p  It was a 100lb 32 inch rear-projection TV.  Think a regular TV before the flat screens came out.  It’s a monster!  Scott and I managed to move it and now it’s in the basement where we are planning on creating a workout area.  I am totally willing to give it up as well!  For Free! If someone wants it, all you have to do is pick it up and be able to carry it outta my basement and it’s yours! It also has no remote, so you know, there’s that.

Sunday, you know what day it was. Long run time!  I was totally going to play today by ear though because I wasn’t sure how the weather was going to be.  That’s kind of how summer goes, you can have the best intentions but you also have to pay attention to the weather and your body.  If those things don’t want to do a big run then you have to acknowledge that and accept it. 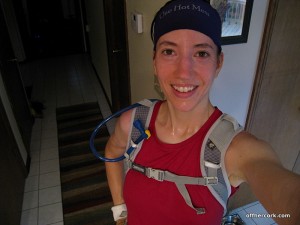 Bonus, you get hot sweaty pics of me today and my CamelBak!  I had no choice, I had to bust out this evil necessity today because it was that nasty out.  At 6am, it was 80 degrees with 87% humidity.  I know the humidity increased a bit since it was clear that rain was iminent.  I took it easy with the heat and with lots of walking breaks to take a drink, I busted out 11 miles under 2 hours.  I am calling that success!

I took a picture of me with my CamelBak because Heather over at HangyPants was asking people how they secure the straw on their CamelBaks.  Mine has a clip and also some elastic straps on each arm piece.  If you click on the picture to make it bigger you’ll be able to see them.  The plastic clip can be removed so you can put it on either side.  When I need to take a drink I just pull out the straw a bit and then push it back in when I’m done.  Don’t we love the sexah chest strap? There’s also another one that goes around my belly.  Who says exercising isn’t hawt?! 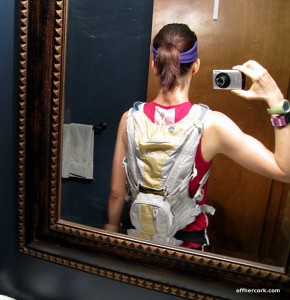 There’s the backside of my CamelBak.  It’s silver with greenish accent colors.  I love the colors and all the pockets!  Plus it’s different which also appeals to me.  Don’t be jealous of my pipes now!

The downside to my CamelBak is that the straps sort of poke and scratch me a bit, the right side the most.  I have no idea how to combat this!  I also can’t stand the swish-swish-swish sound as I run.  Someone on Heather’s site said to squeeze out the air from the bladder and that will eliminate the noise.  I have no idea how to go about this.  If I squeeze the bladder, the water will come out!  If someone knows hot to accomplish this, please share.

Alright pretties, that was my week!  Let me know how yours went and what you accomplished this week!

6 thoughts on “Sweat it out”