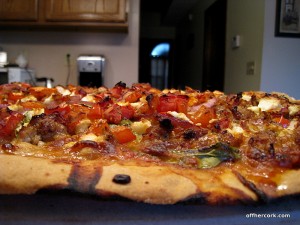 Hi gang!  How is your week going?  Ours is definitely a lot calmer than last week yet last week must be catching up to me because I’m crazy tired this week.  Sleep sounds like so much fun compared to other things! :p

This week’s pizza was inspired by a pizza I had out recently.  I know!  Ordering pizza out, crazy!  It was Restaurant Week (do you all know what Restaurant Week is?) a few weeks ago and Scott and I headed out to dinner at a place called Figlio.  Going in I was planning on ordering off the RW menu but then decided to get something else instead and ordered off their pizza menu.  They serve up wood-fired pizzas and flatbreads.

Wood-fired just happens to be my fave kind of pizza!  So yummy and you get the best crispy crust.  I ordered, if I remember the name right, the summer veggie flatbread.  It had no sauce, just a garlic olive oil as a base topped with cheese and the veggies were tomatoes, red onion, red pepper, and some broccoli pieces.  Topped with balsamic.  It was really good!  It probably would have been better if had been a regular crust and not a flatbread but that is just me being picky.

That pizza inspired this week’s pizza here at the HQ!  I made my own little twist on it and this is what I came up with: 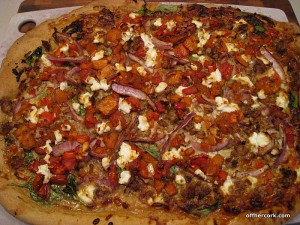 I cut up the veggies and mixed them all together in a glass bowl and sprinkled in a little salt, fresh black pepper, and Italian Seasoning (Mrs. Dash).  I mixed it all up and let it hang out in the fridge, covered, till just before I was ready to use it.  When we got home from MT class, right before I headed up to shower, I pulled out the veggies and mixed in some balsamic dressing.  I let it hang out until it was time to top the pizza. 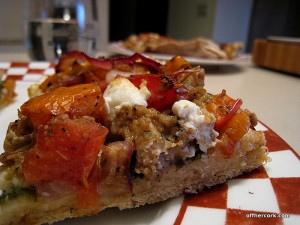 I only had olive oil on my half and put a very thin layer of sauce on Scott’s half.  I layered in the spinach then I topped with the cheese and then layered everything else on top of that.  Originally I wasn’t going to have any sausage but it was dang good!  Hooray for local farmers! So I had some on my half as well.  A few dollops of goat cheese and the pizza was ready.

It was OFF THE HOOK good.  Easily up there as one of the best pizzas I’ve made.  The crust was crispy and thin but not so thin you wondered where it was.  The toppings were flavorful and even though I used a lot of garlic, it mellowed out while sitting in the balsamic and then being cooked.  Everything tasted amazing and worked so well together!

Definitely will be making this one again! 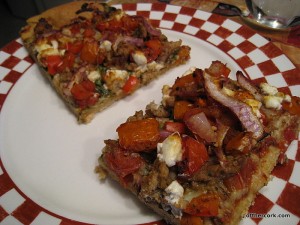 Note to self: Purchase really crappy crazy paintings that you don’t understand. Set aside for 40 years, then sell to fund your assisted living needs.

The episode we watched actually had a bunch of people who had things valued in the thousands of dollars.  Sometimes the most disappointing stuff is the jewelry.  People bring in things from the 1700s and 1800s and they aren’t worth but a few hundred dollars.  You know stuff was way better quality and better made back then by actual people and not machines and such.  Yet a guitar from the 60s can be worth $80,000.  Silly, in my opinion.

No dessert for me last night.  I opted for more pizza instead!