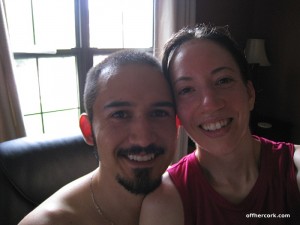 Don’t let this picture scare you, I promise that Scott actually has pants on!  It’s a special picture because it was taken after Scott’s first run with me!  YaY!  I finally put my foot down and told Scott that he was going to start running with me.

Here’s the thing before you start accusing me of demanding my husband around because I don’t do that.  Scott’s only activity that he gets is martial arts which is alright.  But if we miss class that day then he doesn’t get any exercise at all.  None.  He’s got some heart disease and other type of things in his family medical history which isn’t good.  I want him around for a super long time and that means he needs to step it up in the exercise department.

This is where running comes in to play.  Running isn’t a super new thing to Scott.  He’s done track before, he ran (a lot) in boot camp, he ran in college for a little bit, and he ran with me for a short time a few years back (my first attempt at running that didn’t turn into anything).  He can totally run.

I was going to take him out on Monday but both of us were too exhausted and I made the executive decision to get more sleep instead.

Tuesday was the big day!  Scott had the choice of getting up with me at 5:45 and heading out or I could get him after my run and we could run a short run together.  He choose to get up and get it done first thing.  “Okay” I said, “But you realize that 5:45 can come at you pretty quickly.” “I’ll be alright.”  Ha!

We got up and Scott totally floored me with the run.  He also taught me a lot as well.

The first loop of my run is 3.5 miles.  I told Scott that he clearly didn’t have to run all of that right off the bat and gave him plenty of areas where he could change course and head back home.  I also asked him a lot if he needed to stop and walk at all.  He said he was fine and he ran the whole 3.5 miles with me at a 10min pace.

His first time out.

Brat.  I knew he’d totally show me up when he started running.  He’s like that.

I was amazed!  He said his thighs were a bit sore later in the day but otherwise he was doing fine.  I can’t even believe he busted that out!  I left him at 3.5 and did a bit more to bring my total up to 6 miles.

Wednesday he had the day off.  He’s a grown man so he can make his own decisions but I do have a bit more experience in this area so I told him that running back to back at this stage, considering the distance he’s putting out, might not be wise.  I went out by myself and did another 6 miles.

Thursday Scott was out with me again and he did a shorter run, maybe 1.5 miles.  He would have done 2.5 but he was confused about what I was telling him about distance I guess, so he pulled in a bit earlier.  I did another 6 miles.  I would have done 8 but I kept cramping up and at 6 I got another cramp so I pulled into home.

What did he teach me?  That I most definitely am not interested in having a chat while I run.  Every time I tried talking with him, I got a cramp.  Bah!  And no, this doesn’t mean that I’m running too fast.  I can run that just fine thanks.  I just can’t talk and also?  I have no desire to talk.  I didn’t talk to him at all on Thursday’s run.  He asked me if I was mad at him.  Ha! :p  I explained that no I wasn’t mad, I just didn’t want to talk and then deal with getting cramps in my side.  Hee

Saturday Scott and I had some errands to run and I only had time for one level of Shred.  My thinking of course that something is better than nothing.  We were out all day!  We had a meeting with some friends and were gone for a few hours.  Then we ran to the store and were there for a while.  By the time we got home and started eating dinner it was 9:30pm.  Yikes!

I knew that was totally going to affect my long run today.  I totally didn’t take in enough food or water yesterday to prepare for today.  I decided to play it by ear and do what I could.  I got up bright and early and lord was it humid.  I mean like, you could see the moisture hanging in the air humid.  Gross.  Even if I thought I could push myself with that humidity there was no way that would be good for my body.  Not even with a CamelBak along for the ride, no way could I pull that off.

I did 8 miles and am trying to be happy with that but it’s hard!  I miss my long run and I sort of feel a bit incomplete or off balance right now.  Meh.  I’m like, “but it was only 3 more miles and I could have 11 under my belt for the day!”  But I played it safe and came home.  I did the right thing.  Right?

As I was finishing up, I noticed a wee baby birdie on the road. Oh noes!  We had a bit of a storm last night so I think it might have gotten blown out of the nest because it’s wee this birdie.  I finished my run and headed home to grab some gloves.  I went back and scooped the birdie up and put it on the grass by a tree.  It was so tiny that it didn’t even recognize me as not a parent as it was trying to get food from me.  Which made me more concerned because that means it is super tiny!  I moved him out of the sun and I hope his mama comes to get him.  I’m so sad and concerned about him because he’s so tiny.  Will his mom be able to get him back to the nest?  There was no bird around it and nothing causing a fit as I picked it up.  Oh birdie!

Have you ever had to help an animal out?