I prayed my little heart and soul out to the pizza gods.  I addressed them all in my prayers; Thin, Thick, and Sicilian, and asked for help that my pizza dough would turn out alright this week.  I asked for guidance and patience as I work through this terrible time that has been plaguing the HQ.

It was at that point that an idea came over me about what the problem could be.  I thanked the gods and went on my way to test this new theory out.  I crossed my fingers and hoped for the best because if I had to deal with another week of crap pizza, I probably would have smashed my pizza stone and stomped out of the kitchen vowing to never make a pizza again.** 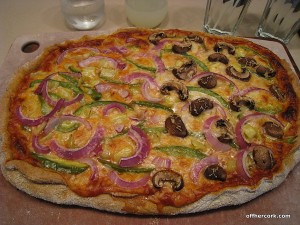 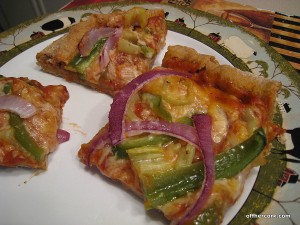 It worked! Joy of joys it worked!

And I ate four pieces, Amen.

Here’s the deal.  Since it wasn’t the yeast, as I tried two different brands, I realized that it must be related to the heat and summer weather.  I figured that I was not helping things by using hot water to bloom my yeast.

Too hot water (not enough to kill the yeast obviously but hotter than room temp) plus hot weather equals yeast that will rise too quickly leaving no substance to the dough.  Which is why my dough would fall if you just looked at it.

Yesterday I used room temperature water and allowed the yeast more time to bloom.  I got the dough I was looking for!  Regular pizza dough that I had been used to!  Hooray!  And I was able to use the pizza stone again which made me silly happy.

I was so happy that I had some wine! I wasn’t going to, it’s race week for me with a race on Sunday.  But eff it, I wanted some wine! Then Scott and I settled in for a little Danger Mouse action!

**I would probably only have stomped around and not actually smashed my pizza stone or vowed to never make pizza again. I hate paying for pizza, who am I kidding?