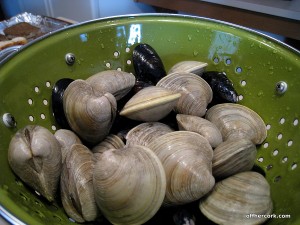 Next to pork, seafood is my favorite source of “animal” protein.  I could eat it all the time!  Well, okay not all the time as I sort of get tired of animal protein.  But I like it a great deal! Let’s go with that instead.

The first time I ever had bivalves to eat (clam chowder from a can doesn’t count!) was with Scott.  We lived in a small town outside of Philly when we graduated college.  There was a little Italian restaurant that we used to frequent  and they served clams in a white wine sauce.  Heaven!  It was the best thing I ever ate and it was amazing.

The first time I ever had mussels, we were living in North Carolina at the time and ordered mussels Rockefeller.  I hated them.  The mussels were chewy and just not something I enjoyed at all.  I left the rest for Scott to eat.  I’ll stick with clams, thank you!

Scott is the only one in this family who can dig on oysters.  I do not want to slurp a slimy mess thanks.

Eventually I grew to love mussels! I realize now that the first time I had them they were overcooked and not prepared properly.  Now I’ve had them on several different occasions and love them a great deal more.

Despite the bivalve appreciation, I have never cooked them before!  Mostly because I was afraid and I also didn’t have access to some fresh ones.  Now I am not so afraid because it seems super easy to make and I’ve watched people make them loads of times on TV.  The only obstacle standing in my way was finding some fresh.

My local Whole Foods has a fish department but it smells like fish.  There is also another local place that sells fresh fish, but most of the time it also smells really fishy and icky.  First rule of thumb when buying seafood is if it smells like seafood/fishy then it’s not good or fresh. Seafood should smell like the sea, slightly salty and bright! You shouldn’t say, “Ew” but “Hrm, I just barely smell anything!”

Last weekend while we were out running errands, we happened to be in the vicinity of the local place that sells fish.  It didn’t smell!  I walked over and checked everything out and then I came to the clams and mussels.  “Oooo that would be so good for dinner!”, I thought to myself.  The price was fantastic and I mentioned this to Scott.  He said to get them and I did! We came home with 1.5 dozen mussels and 1.5 dozen little neck clams.

I placed them in a bowl with some ice packs and kept them in the fridge till the next day.  They did not smell and my fridge did not smell like seafood at all.  Sunday Supper was going to be amazing!  Even though I ran a race that day, all my thoughts were focused on dinner and wine!  You know, the serious stuff.  Finally it was time to get cooking!

I cleaned the seafood and removed the beards off of the mussels.  I only had one little mussel that I had to throw away.  He was open, so as per the instructions, I gave him a tap to see if he would close.  He did not close all the way so out he went.  Everybody else was perfect!  The mussel beards are hard to pull off!  Some I didn’t get fully but it didn’t interfere with the cooking or eating at all. 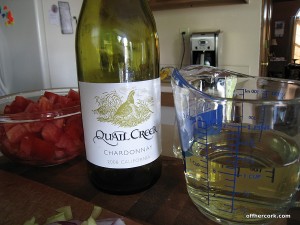 I knew I would be using wine for the sauce and steam for the seafood.  We had an open bottle of Chardonnay and I used slightly more than a cup of that.  No sips for the cook!  I was waiting for dinner like a good girl. 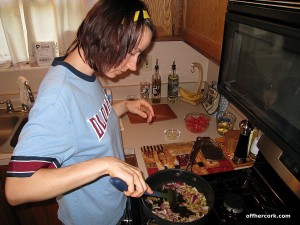 Don’t mind the hair and outfit, it’s Sunday so that’s as good as it gets!  I sauteed up some sundried tomato chicken sausage and removed that from the pan.  Then I sauteed:

In a tablespoon of butter and some olive oil.  I added in some red pepper flakes, sea salt, and ground pepper.  Once those softened a bit I added the sausage back in and 3 large tomatoes chopped up.  Gave that a quick stir and then in goes the seafood! 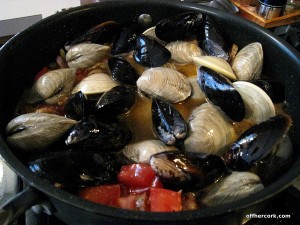 Topped with the wine and given another stir.  Popped a lid on it and let it do it’s business with me watching of course.  I was so excited that I kept hovering around the pot!  Admittedly watching them pop open is kinda fun in a weird sorta way.  The house smelled delicious!

After about 10 minutes my little pretties were ready! 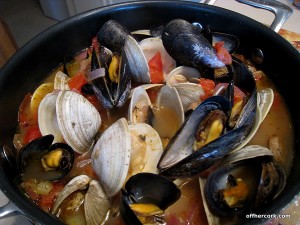 The clams took a few minutes longer than the mussels.  I was concerned that the mussels might be overcooked a bit but that was not the case at all.

Since this was a special night as we were having a special dinner that I made for the first time, I decided it should be more of a relaxing “date” night.  I set the table up all nice with just a few simple things I had on hand. 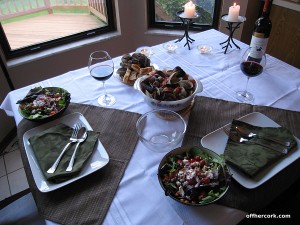 I lit some candles and put a tablecloth on the table with some placemats and things.  We had a lovely light red wine in the fancy wine glasses.  Some toasted bread and salads completed the dinner. 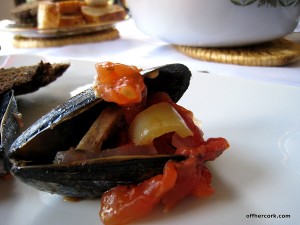 The dinner was amazing!  Everything cooked up beautifully and tasted fantastic!  Three dozen was the perfect amount for a meal and I couldn’t even finish my portion, I was stuffed!  The only thing I would change is using a spicier sausage next time but otherwise I’m sticking with this method.

This meal reminded me of the dates we would have at that small Italian restaurant in PA when we were out on our own living in our very first apartment.  This meal also reminded me that if you don’t expand and explore with your cooking, you will never know what all you are capable of.  I made a fancy pants dinner, one that I used to be afraid of, and it turned out to be really simple and easy!  I can’t wait to buy more!

Have you ever made clams or mussels? What is your method of choice?