Yesterday was a whirl-wind of stuff.  Or so it seemed because when I went to sleep last night I told Scott it felt like I didn’t get to spend any time with him.  Which of course isn’t true, we did spend a lot of time together during the day but it really felt like we didn’t at all.  Ever have a day like that?  Time sort of flies by and at the end of the day you’re like, “Wait how is it 9pm already?!”

Yesterday was a hot stinking mess.  I was out for my run and only managed to crank out 8 miles before I had to head back home.  The humidity was so thick, you could see it hanging in the air.  I showered and had a bit of a morning snack while watching TV and figuring out how I was going to work the rest of the day. 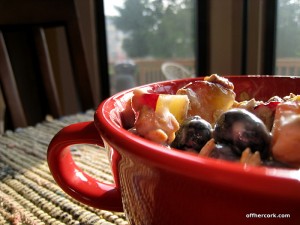 Yogurt with fresh blueberries and plums along with some homemade granola on top.  I’m almost out of granola so I’m going to have to make another batch soon!  I’m going to start experimenting with it a bit and I hope it works out because I love granola and I would hate to waste ingredients on a failed recipe.

I watched some Food TV which is pretty typical for me on a Sunday morning as I browse the internet and let my bod relax from the week and my most recent long run.  I headed back out in the heat to take care of Rocky and get his walk done before the sun got too high in the sky.  We did a short walk though because it was still crazy humid outside and he was not having any of it.  When we got back home I started prepping things for Sunday Breakfast and Scott was also up.  Hooray!

Prep was easy this week because I was able to use leftovers from the freezer.  This is why I always make a ton of food friends so that I have things to pull out when I need it.

I highly recommended giving it a try! I realize that this might mean changing your habits but change is good! Embrace it!

We had glorious buckwheat pancakes. 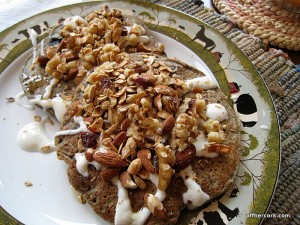 Topped with yogurt and a drizzle of maple syrup along with granola and crushed nuts for crunch and texture.  So good!

And totally filling! Adding a bit of extra toppings to your pancakes will help fill you up and keep you full for longer.  You’ll also find yourself eating less.  Instead of a stack of three, you might only need two or even one and a half!  Pancakes, just like oats, can be topped with whatever floats your boat and what tastes good to you.  Experiment!

Along with the pancakes we had some cantaloupe.  The first cantaloupe of the summer!  It was so delicious!  I love cantaloupe very much.  While it’s not my fave summer fruit, it’s up there!  Growing up we would eat it with a scoop of vanilla ice cream on occasion.  It might sound odd but it was totally delicious and refreshing.

After breakfast I did some prep work for dinner and then Scott and I actually had time to game again!

We’re still playing Lego Star Wars and it’s still frustrating me.  Each section has a red brick that you can collect.  They are hidden or sometimes you have to preform a certain task before it appears.  They aren’t easy to find (at least not in the SW game) and we had just found one!  Hooray!  I was on my way over to get it when the scene ended, there was some animation to further the story and we were dropped into the next section.

CURSE YOU Lego Star Wars!  It also reconfirmed my hate for playing a character with a light saber.  Guns are much faster.

Then it was time for dinner!  We were grilling and had to make haste because clouds started rolling in and it seemed like it might start raining soon.  Dinner was super easy and with early prep there was no cleanup needed afterwards.

Those are my kinds of meals! 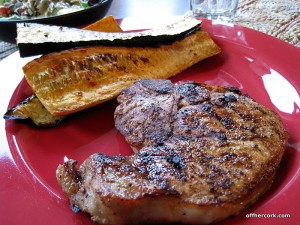 Grilled cider brined pork chops along with zucchini and yellow squash.  The squash sat in a marinade of:

It was spicy and perfect!  The chops were tender and totally fully of flavor.  They were thin so they grilled up in a matter of a few minutes.  Scott was nomming away like crazy.  And for some extra veggie power, we had salads.

Topped with a homemade honey mustard dressing.  So easy to make that you can whip it up in a minute!

Mix and dress!  No exact measurements because depending on how much salad you have will determine how much dressing you need.

Thankfully it didn’t rain on us! But it was really buggy outside so we had to eat inside which was a bit of bummer because I love sitting on the deck enjoying a meal and the outdoors.  During dinner our conversation was all about Star Wars.  I was having Scott explain the story to me because I’ve never seen it.

“Oh, so the Sith or Dark Side is like the Dark Magic in Harry Potter?”

“So is Queen Amidala like Aragorn in that she is a lot older than she looks? She’s old but doesn’t really age?” (I didn’t really get an answer to this!)

Also? Can I just say that speaking as someone who hasn’t even seen the movies, I’m totally not buying the Amidala and Anakin romance.  Sorry. Scott, who has seen the movies and understands the story also agrees that their romance is a little (a lot) unbelievable.  Especially given how much of a prick Anakin is (his words, not mine).

Once we were done eating and ready to sit on the couch to enjoy the rest of the evening and relax, it was 9pm.  Just in time for Holmes!

Seems that HGTV decided to change the time Holmes comes on and now shows it at 8pm instead of 9pm.  I don’t recall this getting mentioned anywhere.  The changed caused us to totally miss Holmes!  Grrrr!  We watched a documentary instead because that’s how we roll.  We also had dessert! 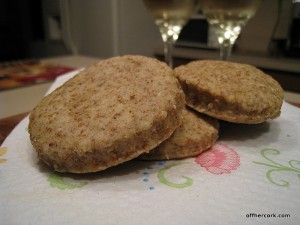 Vegan Coconut Sugar Cookies (OHC original)!  With some wine, mmmm.  White wine because it was still super dang hot!  After the documentary (on coal mining because we are such partiers), I crashed out in bed.

How was your weekend my pretties?

This post was part of Homespun Sundays.  If you would like to participate, just let me know! It’s easy!

12 thoughts on “May the force be with you”