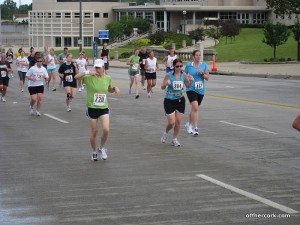 I haven’t done a weekly exercise report or training update in ages.  In all honesty, the weekly reports bore the bejeezus outta me.  If it’s a snore for me to write them, it’s got to be a snore for you to read them.  I think I would rather just do a weekly sort of summary post with general chit-chat so we can catch up.

I miss just chatting with you friends! We’re always talking about something specific and sometimes I really just want to pull some ADD on you and talk about random whatevers.

So this week, while I still maintained my average mileage (I’m typically in the area of 20+ miles a week), it was a bit of an oddball of assortments.  On Tuesday I ran 8 miles, yeah baby!  It was lovely outside and since I did a 10K on Sunday, I didn’t get in a “long” run that week.  The 8 miles went great and I had an awesome pace going on.  Tuesday evening, I was at Muay Thai and tweaked my right groin muscle a bit.  Gah!  It bothered me the week before but was fine by race day.  I was shadow boxing, threw a right knee and my groin didn’t like that very much.  The rest of the night it was hard to throw more knees and to do any left roundkicks.  I was pouty and mad.

Wednesday it was raining so I did some workouts that I found on Bodyrock.TV.  That shit is no joke.  The workouts are hard! I love that the host actually does the workouts and you can see her get tired and she talks about how hard the stuff is.  A lot of people talk about Exercise TV but I can’t figure that stinkin’ website out.  Bodyrock.TV posts everyday and the workouts are free.  It is awesome! I totally suggest checking it out if you’re into core and strength workouts that use your own body weight for the resistance.

Thursday I rested and only did conditioning class that evening.  Bonus for me, I was able to do some clap-pushups for the first time ever!  Hooray!  I did five in a row and then added a few in every so often during the set.  YES!

Friday was a total rest day.

Saturday, I slept in and then did a quick 4 miles in the crazy heat.  LORD. Running in late morning is so hard for me! I am such a wuss and definitely prefer to run before the sun rises.  The rest of the day was spent running errands.  Shopping errands, the kind Scott loathes.  He was such a good sport though and didn’t complain once!

We stopped at Old Navy because I saw a commercial they were having tanks on sale for $2! However by the time I got there, they were sold out.  The sales chick said they had lines outside the store before they opened and the store opens at 7am. :o  Hardcore shoppers!  I did score a pair of jeans for $13, a sweat shirt which is so awesome I cannot wait to take a pic for you, and some lovely long-sleeved Ts.

I also hit up Target, Dick’s (the store people), and Kohl’s.  Oh yeah!  Also can I say, thank god for Vera Wang jeans because they are amazing!  I have the worst time finding jeans in my size and shopping in the junior’s section isn’t my idea of a great time.  That’s a whole other rant for another time.  Scott was so amazing that I made him some spicy mac ‘n cheese for supper.

Today 5:45am came super early, ugh!  I got my hiney up and out the door and kicked out 12 miles.  Hellz yes!  That’s my longest run since the half in May.  Go me!  It was a bit rough going towards the end.  I was tired and by that point it was overcast and getting humid outside.  I pushed through and am so happy that I did!  The downside is that my new shoes gave me a blister.  Grrr! I’ve never gotten a blister from Brooks before and these new shoes are so different it’s like they aren’t even Brooks Adrenalines.  I’ll have to go into that more next week as I’ve already written a novel and chatted your ear off!

Alright guys I’m out to continue getting my grub on.  Hooray for distance running!