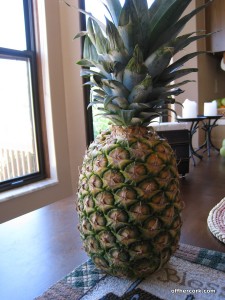 It wasn’t harsh or overly acidic like the canned version.

I could not get enough! From that point on I vowed that when living on my own I would get fresh pineapple when possible for a lovely treat.  It seems that I prefer pineapple more in the summer months.  I’m not sure what the growing season is for pineapple but the summer is when it calls my name.  Along with watermelon.  They have to compete with one another.

Cutting up a fresh pineapple is easy and tricky all at the same time.  Slice off the top and bottom, then slice down along the sides removing the skin.  Then you have to go through and try to remove as much of the “eyes” as possible.  When you chop up the pineapple, you need to maneuver around the core.

And there’s the rub.

After what seems like a lot of work you’re left with some cubed pineapple but a whole heck ton of core! 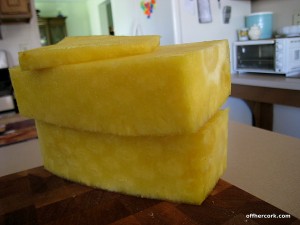 What to do with all that pineapple core?

Well you could eat it.  The pineapple core is edible although most people tend to not eat it since it has a harder and more gritty texture. What next?

Whatever you do, don’t throw it away!  Save the core!  It can be useful, I promise!

Freeze it!  That’s right, your freezer is your friend and you can freeze that core for later uses.

Perhaps you are making a punch?  Or some sangria?  Or you just want to give that OJ some pizazz at your next breakfast.   Plop the core down into the mix and let it hang out.  It’ll give your drink some extra pineapple flavor!  Plus if the core is still frozen it will help keep the drink cold and delicious.

The core is easy to cut up into more manageable pieces.  You can cube it and then freeze it.  Use instead of ice cubes.  We’ve talked before about how frozen fruit makes great additions to drinks and pineapple core can be used just the same!

It can also be tossed in with a marinade to bring some zip and tang to the dish.

Pineapple core can be handy! And once we start using it in different applications we won’t feel like we’re tossing half the pineapple away once it’s cut up! 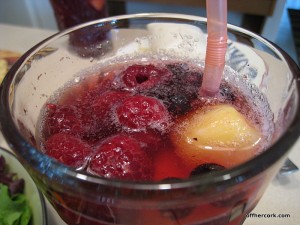