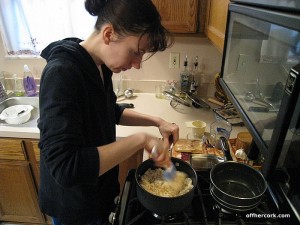 Ever since my new found love for sushi, Scott and I have been enjoying it more and more.  In fact it’s sort of now become a staple in our house and we have deemed Friday nights, Sushi Friday Night.  I can’t even tell you how much I look forward to it!  It’s almost as exciting as Pizza Thursdays and that’s saying a lot.

We are lucky that Columbus actually has a large number of sushi establishments and so far we have tried four.  Our favorite right now being Akai Hana for several reasons.

While the price of sushi isn’t overly expensive, eating a meal out every week can get pricey.  Plus I’m not someone who likes to dine out a lot because I would rather spend that time cooking.  Scott and I decided to try our hand at making our own sushi.  I was excited because not only would I be learning something new but this gave me a reason to finally visit the Asian Supermarket.

Just so I wouldn’t feel too out of place, I took Scott with me for backup and extra street cred. 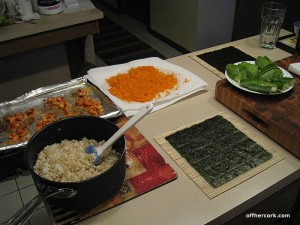 Um, the Asian Supermarket is like the greatest place ever.  I have no idea why it took me so long to get there!  They have tons of stuff and I got a gigantic jar of chili garlic sauce for like two bucks.  Killer!

We wander the aisles for a long time and collected everything we needed:

We’ve made sushi several times now and each time we get better and better.  The island in the kitchen makes a great prep station where I can lay out all the ingredients and then we can slice the rolls on the cutting board.

We have not done raw fish yet.  Our fillings consist of veggies and some shrimp that I quickly roast in the oven. 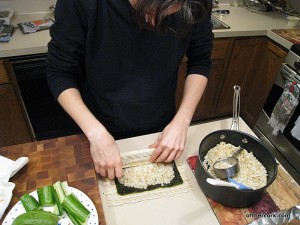 I thought it would be tricky learning how to roll sushi and to my surprise it’s not that bad.  Now I’m not skilled enough or have enough experience under my belt to use a half sheet of nori per roll.  I have to use a full sheet and I’m okay with that.  Maybe at some point I’ll have better skillz! 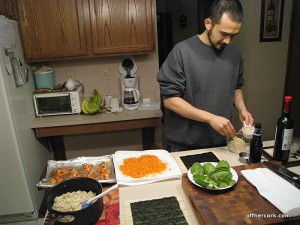 The thing I love most about making sushi at home is that it is something Scott and I can do together.  Normally when we’re in the kitchen, I’m cooking and Scott is hanging out being Scott.  I do all of the cooking here at the HQ but sushi night means we can both get our roll on.

I like sharing time and space with Scott making dinner.  We’re not in each other’s way as we each have our own little spots at the sushi station.  We can chat and we each have our specific things to make.  I make the veggie rolls while Scott makes the shrimp rolls. 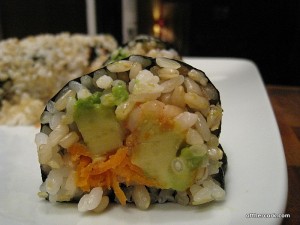 With practice we are getting much better at making rolls and understanding how to layer in the ingredients.  Scott has even channeled his Asian-Fu enough to master the inside-out roll!

We end up making a good bit of sushi as each of us can put it away like we’ve got a wooden leg. 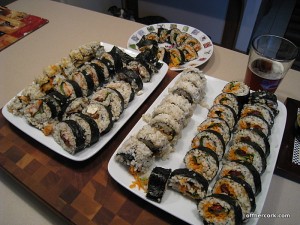 We’ve explored different combos and some have worked while others sounded better on paper.  I’m not a huge soy sauce fan for dipping so I’m looking for alternative dipping sauces.  Hopefully I’ll find a good one that I can make at home soon!

Sushi Friday Night is a great ritual!  It makes for a nice light meal and it’s fun to be able to hang in the kitchen with my loves.  Sure sometimes we order out for one reason or another but most times we stick with making our own.

Have you ever made sushi at home?  Do you like sushi and if so, what is your favorite kind to get?

Leave a Reply to Natalie (The Sweets Life) Cancel reply