Hi my pretties! This week flew by! I don’t even know where it went but it’s gone!  Those in the US are you looking forward to a long weekend?  We are!  However our long weekend is going to involve lots of yard work.  Joy.

Scott and I are not yard work fans.  Our idea of “yard work” is sitting out back with some wine or a beer.  The previous owners of this house loved landscaping and plants apparently because we’ve got a ton.  I’ll spare you the details or maybe I’ll just write a landscaping post but for right now we need to talk pizza. 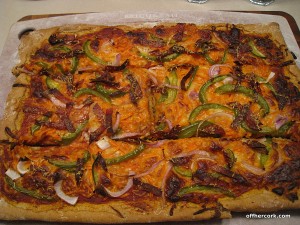 We were at Whole Paycheck recently when Scott spied some pepperoni.  The ingredient listing on this wasn’t bad plus it had the added bennies of being antibiotic and hormone free.  I did taste it and it tasted like awesome pepperoni.  I haven’t had pepperoni in like a year or something extreme due to obvious reasons of it being sketch and full of factory farm bits.  This wasn’t sketch or at least didn’t appear to be sketch. 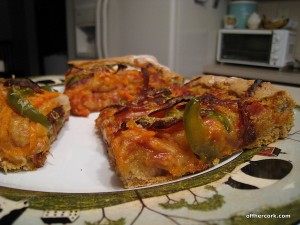 Guys we have to talk about my dough! This situation is getting out of control because this pizza was crap.  CRAP!  I have a feeling it’s the hot weather but I’m not positive.  I changed yeast and went back to my good old standby.  My dough was again sticky and gloppy.  Adding more flour did nothing.  It would rise but if you touched the bowl or even looked at the dough disapprovingly, it would immediately deflate.

I added more flour and stuck it in the fridge.  When it was time to roll it out, I kneaded in more flour and that seemed to help a bit but rolling it out caused it to stick to my rolling pin and the counter.  I added more flour and rolled it out again.  Just not as thin this time, but when I picked it up to place on the transfer sheet, it just fell apart.  It could not hold itself together.

I gave up and went old school using a baking sheet.  However it took forever to cook and finally after 45 minutes at 425, I pulled it out in frustration and served it up.  The dough still wasn’t even cooked all the way through! It was like the sauce and toppings were preventing it from cooking.

I have no idea what to do or what the problem is!  Any thoughts?

Okay moving on to other things!

The fabbo Linzi from Destination 26.2 and Aneta from Confessions of a Rambunctous Runner have both awarded me with The Versatile Blogger Award.  I’m supposed to list 7 random things about me that you might not know.  Pretty soon I’m gonna run out of things!

1. Why yes, I am married but calling me “Mrs.” will make me cranky real fast.  Please just use Ms. and our relationship will go a lot smoother. :p

2. I have a birthmark on my left wrist that I forget about until someone asks me what happened. I guess maybe people don’t think it’s a birthmark and they think I got burned or something? I dunno, looks like a birthmark to me.

3. I’m allergic to strawberries. Also? I don’t even like strawberries.  True statement. So when I pass on that summer strawberry shortcake of yours it’s not because “I’m counting calories” or “Being a good girl today”, it’s because I don’t want to break out in hives or, you know, eat something I don’t actually enjoy.

4. It wasn’t until I was in college that I realized there was more to cheese than American, Swiss, and Colby-Jack.

5. Due to training in two martial arts, I’m constantly covered with bumps and bruises on my arms and legs. Sometimes they are quite colorful! I promise it’s nothing to be alarmed about.

6. I am on a mission to reread some young adult books and read some classics.  There are a lot of classics that I was never exposed to, such is the result of growing up in a very small hickville town.  And there are some books from my childhood that I want to reread and some that are a series that I didn’t even realize!

7. I am in love with old maps and globes.  I think they are fascinating! My formal living room has a world map/globe theme and it’s my favorite room in the house! There are lots of ways to win my heart and presenting me with something old timey is one way to get there.