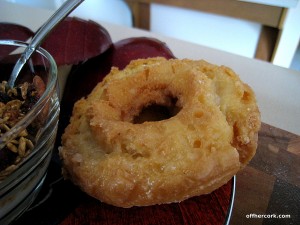 I had something today for breakfast that I haven’t had in ages, a donut.  In fact it’s been so long since I’ve had an actual donut that I don’t even remember when that last time was!

There is a small little donut shop not very far from our house and we just recently discovered that it existed.  We had discussed getting donuts before but never made the purchase.

Today as I was showering after my workout, Scott asked me if we should get some donuts.

I finished my shower while he made a quick donut run.  He came back with a few selections for each of us.  He explained what each selection was and said that by the time he arrived most of everything was picked over.  Apparently you need to get there super early in order to have a bigger selection.  What he did purchase was perfect though.

As I was looking in the box at the variety of donuts, I realized that Scott’s tastes and my tastes are totally different!  And it’s amazing that just with something as small as donuts, you can see distinct personalities.

I prefer cake or old fashioned donuts.  I don’t really like glazed or sugared donuts.  I also do not like filled donuts or donuts with icing on them.  I love chocolate cake donuts.  Scott is the exact opposite of me. 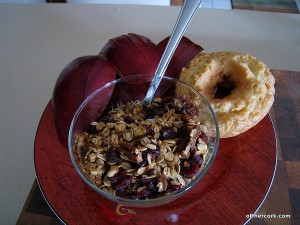 I had my donut with a sliced apple and a small bowl of yogurt and granola.  I need a little more UMPH to my breakfast.  Just a donut doesn’t cut it.  I chose a sour cream donut that I could dunk into my coffee because a donut dunked in coffee is a totally amazing taste to me.

I actually have some really great donut memories.  I was a little kid when my oldest sister was away at college.  When she would come back home on breaks she would bring Dunkin’ Donuts with her and I got to eat chocolate donuts!  I grew up in the sticks and we didn’t have a Dunkin’ Donuts.  We had a Yum-Yums that sold donuts but they sold other things too and mostly did breakfast stuffs for the guys in town who worked nights.  Anytime we had donuts at my parent’s house, they were from the grocery store and usually along the lines of honeybuns or Hostess donuts.  A donut from an actual donut shop was a rare and welcomed treat.

The first time I ever had a Krispy Kreme donut, Scott and I were living in North Carolina.  We were on our own and while we had already been living on our own for over a year by that point, living in North Carolina was our first adventure away from family and Pennsylvania.  It was just us doing our own thing and making lots of discoveries along the way.  We had seen some Krispy Kreme donuts in the grocery store and decided to try some.  They were heaven and unlike any kind of donut I’ve had before.  Whenever we wanted a special little treat, we would get some donuts to share.

Today’s donut was a nice little change and treat to have with our morning.  As I ate my sourcream donut and Scott ate his cream filled donut, I realized that how sometimes something as simple as a donut can stir up a lot of thoughts and memories.

Do you like donuts?  Do you have any special donut memories?